Analysts from across the college football blogosphere have written at length about the future of Big Ten realignment. With the season fast approaching and my future posts likely dedicated to weekly matchups, I'll give my prediction for the final alignment in the Big Ten.

Firstly, there is a very high likelihood that the Big Ten will be divided into two divisions. An annual conference championship game would be good for ratings, fun for fans, and would bring in additional revenue for the schools.

So, how can there be an equitable split of the Big Ten into two conferences? I've put together my predictions based upon six factors: 1) Football Revenue, 2) Basketball Revenue, 3) Rivalries, and 4) Balance of Power.

Here's my prediction, which is in no way unique from what others may have written in the past:

Here's how the divisions would break down on a map: 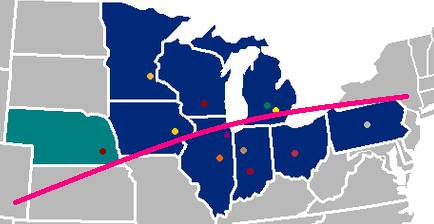 Is this just a geographical breakdown? Absolutely not. Let's take a look at the team revenues for this scenario. For the analysis, I used a published list of 2008 team revenues:

Combined, the two divisions would have similar revenue production. How would this affect rivalries? If each team were allowed one, or in the case of Penn State two inter-division rivalry to be preserved for each season, the following rivalries would be preserved:

Of the rivalries on the list that I found and referenced, only the Michigan State versus Penn State rivalry game doesn't fit the model. The only team that would have to play two out-of-division games each year would be Penn State with Nebraska and Iowa. I don't see that as a problem, as Penn State fans and the media would probably appreciate having both of those teams on the schedule.

Finally, what about the balance of power? Well, both divisions would have two perennial powerhouses. In the following list, I've placed the Big Ten teams into three groups for cumulative football and basketball prowess: 1 = Top Tier and top TV $, 2 = Middle Tier and middle TV $, and 3 = bottom tier for the Big Ten:

The power does appear to be shifted towards to Northwest. But imagine the revenue potential of an Ohio State/Michigan or Nebraska/Penn State Big Ten Conference championship game.

There's no way to have a perfect split amongst divisions in the Big Ten. However, I think that this model comes close.

So, what do you think? Is this an equitable and fair split for the conference? What would you do differently?