Lining Up the Stars Vs. USC: For Those Who Say Stars Don't Matter

Share All sharing options for: Lining Up the Stars Vs. USC: For Those Who Say Stars Don't Matter

The odds that Minnesota's football program redeems itself by defeating USC are pretty good when compared to the odds of winning the Powerball Lottery. That being said, having USC on the schedule is exciting. It gives the fans a chance to watch an elite team, it gives the players a chance to prepare for Big Ten play against a team on par with Ohio State, and in theory should generate additional revenue for the University.

Quite often, many college football fans will question the validity of the star ranking system for high school recruits. Of course there are always going to be exceptions, but the star rating systems generally give a good indication of what can be expected from recruits. Case in point, USC. Gopher fans will see an elite squad of prototype-NFL athletes on Saturday. Let's take a look at how the offenses of Minnesota and USC compare: 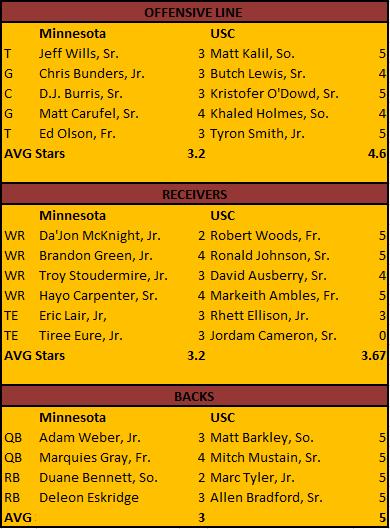 Yup, that's a five star flush for the USC backs. The third string running back, C.J. Gable? He's also a five star recruit. Not to be left out, three five star wide receivers will be lining up against a Gopher secondary that was torched by the South Dakota Coyotes. If Matt Barkley goes down, Mitch Mustain is his five star backup. The offensive line also features high profile recruits.

How does the USC defense look, and could the game become an offensive shootout? 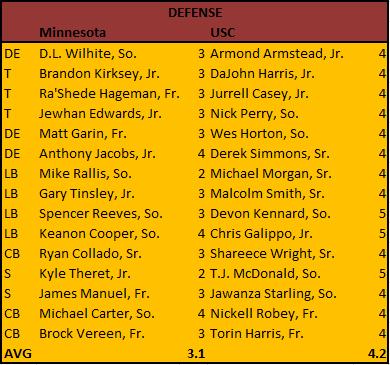 Well, the Gophers may try to isolate a weakness in the USC defense by singling out a four star player, because that's as low as it goes. Yes, USC has looked sloppy on defense in the first two games of the season. Yet, somehow I fail to believe that Minnesota will be able to "pound the rock" against their blue chip front seven.

This game won't even be close, but it may be the best thing that could happen to this young Gopher team. Last week had to be flat-out embarrassing. This week will be a reality check of what NFL caliber talent actually looks like. After Saturday, the rest of the season's opponents won't look seem as fast and strong as they otherwise would've.

Superior talent will be in the hands of head coach Lane Kiffin, a Minnesota native who is probably chomping at the bit for a triumphant homecoming. The game could get very lopsided, very quickly.

If you want to get a firsthand look at USC's first team, get to the game on time. I doubt they'll be in the game after halftime. I also doubt Minnesota will score a touchdown against the first team defense. Gopher fans should realistically expect a blowout, and should be satisfied if USC wins by less than 20.