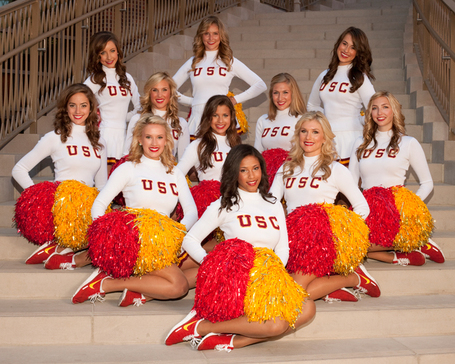 The USC Trojans are coming to town and along with their historic football team they'll be bringing the "world famous" USC Song Girls. I contacted someone at USC to request an interview with one of the 2010 members and my request was granted.

So in a little bit you'll get to meet Shelley (second row on the left in the picture), but first a little history on the Song Girl squad.

In 1967, seven young women were selected as the first USC Song Girl squad. These talented students walked onto the field of the Los Angeles Coliseum to cheer on the Trojan Football Team to victory, starting one of the most storied traditions in the history of collegiate sports. Some forty years later, after numerous National Championships for both the Football Team and the Song Girl squad (also known as the USC Song Leaders), the women, now numbering twelve, look resplendent as ever in their trademark white uniforms trimmed in Cardinal and Gold. The Song Girls, who perform three dozen new dance routines each year, appear at all football games as well as basketball and volleyball games.

Shelley LaRue is on the 2010 squad and she was kind enough to answer some questions for me about the life of a Song Girl and other such things. Shelley is a senior Broadcast Journalism major from Scottsdale, Arizona.

I first asked her how she ended up at USC.

Song Girl Shelley - I knew I wanted to go to a top university with a big emphasis on sports and Greek life (I'm in the Delta Gamma sorority) that was also located in a large and vibrant city like Los Angeles. USC has exceeded my wildest dreams as a university and what it has to offer its students. This is my second year as a USC Song Girl.

TDG - USC is a tradition rich program and we are pretty excited to have an elite program like this coming to Minnesota. Decades of winning football games is part of it but also the gameday fanfare, the USC band, the Rose Bowl, the Trojan and of course the Song Girls all add to the tradition of USC football. What does it mean to you to be a part of this tradition?   (truth in advertising, I was referring to the bowl games, not home games at the Rose Bowl but I wasn't very clear)

SGS - Well first of all, the USC Trojan football team plays in the Coliseum, not the Rose Bowl stadium - that belongs to another university across town. ;) But yes, being a part of USC's tradition is a great honor. The USC Trojan Marching Band leads students, alumni, and fans from all over the world in gameday spirit. Both the Song Girls and the Trojan Marching Band are busy all year round performing at various gigs not only in Southern California but all over the world to promote Trojan spirit and pride, and keep Trojans everywhere united. The USC Song Girl team began over 40 years ago and in that time little has changed in the uniforms we wear, the type of choreography we perform, and the overall presence and essence of what a USC Song Girl is. We always want to support Trojan athletics and the university as a whole in a classy and sophisticated manor. There is nothing better than a USC football gameday. A lot of hard work and preparation goes into keeping the USC tradition alive but the honor of being a part of the Trojan family is well worth it.

TDG - TRIVIA...Speaking of deep traditions in college football, can you tell me where cheerleading was invented?

SGS - From what I've read, Johnny Campbell introduced organized group cheering to the University of Minnesota when he shouted out a cheer to get the crowd going in 1898.

TDG - ANSWER...The University of Minnesota. You may not realize it but Minnesota also has a long history of success in college football. We've been playing football for 127 years, we've won a few national championships, we invented rivalry trophies and of course we invented cheerleading! Is it at all interesting to you that you'll be traveling to the campus where cheerleading was created?

SGS - It is definitely interesting to be traveling to the university where cheerleading originated. At all of our home and away games we love to meet the opposing team's cheerleaders and sometimes have time to get to know them during the halftime break. We are looking forward to meeting the University of Minnesota cheerleaders and are anxious to see what the university has done with their cheer program since it began over 100 years ago.

TDG - Moving on from "traditions." Tell us about the selection process to be selected as a Song Girl? How many girls try out, how stressful is the process and then tell us about the 2010 squad?

SGS - The USC Song Girls are a highly technical dance team. We are not cheerleaders who do flips, tumbling, and stunting. Each girl has been trained in jazz, ballet, hip, hop and other types of dance and each girl is extremely passionate about dancing, being a part of a team, and supporting our outstanding university and its athletics. About 100 girls try out each year to be a USC Song Girl. The girls learn a technical routine across the floor that involves kicks, leaps, and turns. Then they learn a jazz dance routine and a routine to the USC Fight Song. That day, they perform those three dances in front of a panel of judges and a cut is made. About 30 finalists make the cut. For the final round, the girls must again perform those routines in addition to choreographing their own jazz routine. Then, the team is selected based on wherever a natural break existed in the judges scores. The team can be anywhere from 9 to 14 girls each year depending on the talent level that year. The 2010 Song Girl team has 11 girls. Six of us are returning for our second year on the squad and five new girls have joined. We love working together, are great friends in and out of uniform, and are looking forward to an exciting 2010 football season!

TDG - Now that you are on the squad, what kind of a commitment does it require by you? What kind of preparation for gamedays and what kind of responsibilities to you have off the field as part of being on the Song Girl squad?

SGS - The USC Song Girls practice Monday through Friday for three hours each day. We begin practice with a warm up stretch and then do some light weights. We have over 40 dance routines each season so much preparation is needed before and during the season to keep those routines clean and performance ready.

SGS - Being a USC Song Girl is such a great honor and all the girls on the team feel so lucky to be having the experiences that we are having. One interesting thing that happened last season when our team traveled to Chicago for the Notre Dame game, was that we only got two hotel rooms for our team of ten girls. This meant girls were sleeping on couches and on game day, there were five girls sharing one mirror! It was a little stressful but it all worked out on the end!

TDG - Finally talk about your trip to Minnesota. Have you been before and what do you have planned for this weekend? I'm assuming a Mall of America trip but I could just be stereotyping.

SGS - A few girls on the team have been to Minnesota before when we traveled there to cheer for the NCAA men's basketball tournament in spring 2009. This weekend we arrive Friday evening and will probably relax since it is the night before gameday. Saturday, we will have a morning practice to review our dances and get warmed up. We will have a good pre-game meal and then cheer at pre-game rallies and the football game. I think we are going out to dinner Saturday night after the game. Then Sunday, yes, we are going to Mall of America for a few hours and our flight leaves to return to LA around 3pm. We look forward to the trip!

Thanks again to Shelley for taking the time to answer my questions. For those of you will be sitting on the USC sideline you can rip the Trojans mercilessly but be nice to the Song Girls. It will be a lot of fun to have USC in our stadium this weekend. The outcome of the game is going to be one thing but having a program like USC in our house will be fun. There are BCS programs and then there are elite programs. And at the risk of repeating myself, again, it will be fun to have the Trojans and all they bring with them at The Bank on Saturday.