The Trojans invade The Bank to take on your Golden Gophers. Minnesota is coming off one of the programs worst losses and they try to right their season as they face the #18 Trojans. 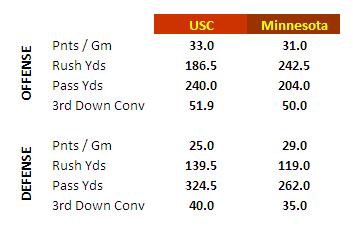 Buck laid out the recruiting stars between these two teams and it wasn't pretty. The numbers above are really hard to compare just because we are only two weeks into the season. USC is averaging 33 ppg but that is a 17 point game and a 49 point game so like I said, the numbers really don't mean a whole lot yet.

Let's put the South Dakota game behind us and put up a good fight against the Trojans.