Share All sharing options for: Man That's A Good Player 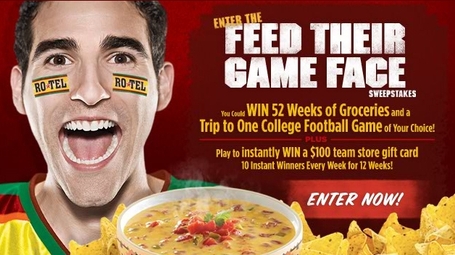 So, Ro*tel has decided to sponsor a post on the SBN Big Ten blogs. They would love it if you would head over to their web site and register for their Feed Their Gameface Sweepstakes. The grand prize is two free trips to any college football games in 2011 and free groceries for a year. There are other contests on the website for football fans. I know that I'm writing a post that is sponsered and I'm promoting their sweepstakes. But this is one of those things where Ro*tel recognizes that the most passionate fans congregate at blogs like this, like other SBN blogs and other blogs throughout the interwebs. They came to SBN because they want to reach college fans like you.

Ro*tel asked me to write about someone on the Gopher roster. Someone that would make me say "Man that's a good player!" I thought of one player and one player only. When I've watched the 2010 Golden Gophers there has been one player that I watch and say "Man that is a good player." MarQueis Gray has been outstanding this year and easily the most pleasant surprise of the year.

The former backup QB has been converted to WR for the 2010 season. He spent some time last December working with the receivers prior to the Insight Bowl but he still played several snaps at QB. He spent most of the spring working under center and he spent fall camp splitting time between the receivers and the quarterbacks. Yet the sophomore who has yet to work full-time with the receivers is third in the Big Ten in receptions and receiving yards.

We've all been impressed with him as receiver but nobody is really pointing out that he's third in the Big Ten in receptions and yards. That is really outstanding. Gray eased into the 2010 season catching just one pass in the MTSU game. Since then he's averaging 6.5 receptions, 1 TD and just under 100 yards per game. He is clearly stepping into the role of Weber's go-to receiver.

Coming into the season we figured the receivers would be solid but there was no way that anyone could possibly step into the departed shoes of Eric Decker. And while Gray isn't quite Decker, he is quickly developing into a great receiver. A receiver who is entirely talented enough to be drafted when he is done playing college football.

When I watch Gopher football, MarQueis Gray is the one guy who stands out. Gray is extremely talented and even against an extremely talented team like USC, he stood out. He is the one guy on the roster who when he touches the ball I hold my breath a little bit because he may do something special with the ball. He has made some mistakes but considering he's learning a brand new position on the fly he's been more than just productive.

The huge question is where will he be lining up next season. There is insistence that he'll be the QB in 2011, but there is also proof on the field that he has a real bright future as a receiver. The other half of that question is, if he does line up at WR then who is our QB? But that is another question for another day. For the 2010 season I love watching MarQueis Gray line up as a receiver.