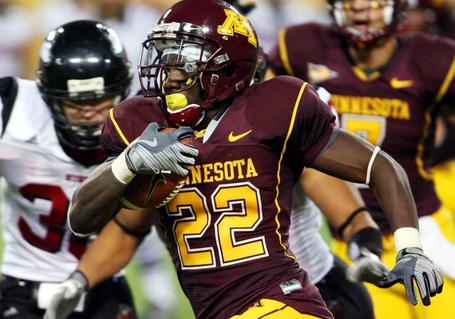 Man what an exciting day of Big Ten football (heavy sarcasm there). Four teams scored 45 points or more (and Ohio State is well on their way). Michigan State, Wisconsin, Iowa and Michigan won by a combined 225-31. But then you had Purdue dropping a home game to Toledo. So let's hope that tonight's primetime game is more like the first four teams mentioned, and not like the latter.

The Huskies come to town for the second time in the Tim Brewster era. The first meeting was game one of the 2008 season and the Gophers won 31-27. That game is relatively important as it was the first career start for QB, Chandler Harnish who threw for 326 yard and 2 touchdowns. One of those was a 91 yard TD to Nathan Palmer. Both will be playing tonight. NIU leads the MAC in rushing, largely due to the legs of Harnish and of course their RB, Chad Spann. After the disaster that was USD, we better be prepared for a mobile QB this week or it could get ugly at TCF Bank Stadium.

Look for #66 Trevor Olson as he is the lone Minnesotan who will be playing tonight for the Huskies, Olson is the starting LT.

This game is not going to be a gimme and could easily put the Gophers at 1-3 heading into conference play. we better be ready tonight to play against one of the better teams in the MAC. This will be a chance for the defense to show if they have made any adjustments or improvements since the SoDak game.