Hot Seat Magic Number: So You're Telling Me There's a Chance. Yeah!

Share All sharing options for: Hot Seat Magic Number: So You're Telling Me There's a Chance. Yeah!

Despite entering a challenging Big Ten schedule with a 1-3 record, there is still a chance that the Gophers can recover and save Tim Brewster's job. A likely chance? I wouldn't go that far. Welcome to the second edition of the Hot Seat Magic Number. By the way, I'm counting the number of wins Brewster will need to keep his job, and not the number of losses to lose it.

If the team could recover to have a 6-6 record, such improvement would require a 5-3 Big Ten record. I'll go as far as to say that a 5-7 record, with 4 wins against the right teams, could also save his job.

"So You're Telling Me There's a Chance." - Lloyd Christmas, Dumb and Dumber
At this point, a 5-3 record would require drastic improvement regardless of whom the victories come against. It wouldn't be possible without winning at least one game against Iowa, Wisconsin, Penn State, or Ohio State. So, for this week, the magic number remains at 5.
A 4-4 Big Ten record would, in my opinion, only save his job if he wins a few big games. And a 5-7 overall record should only be acceptable if the team shows drastic, continuous improvement as the season progresses. Here's how last week's hot seat magic number chart, which can be viewed at this link, looks now: 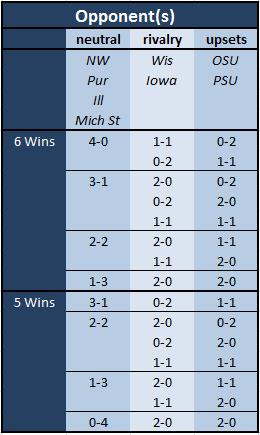 The list has definitely gotten shorter, and tougher. So what do you think?