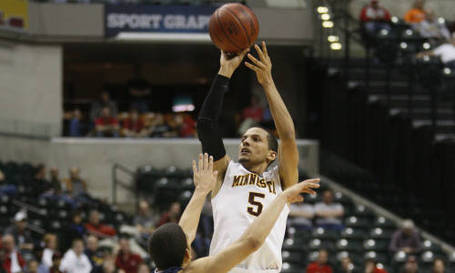 Gopher basketball took a trip to Vancouver. Most of us knew about it but since their first game was the same night as the football team's game at MTSU nobody really knew that the games have been played. I was planning to write up a big recap but then WWWWWW over at Down With Goldy wrote exactly what I was planning to write. Since I was going to write those exact same words I think I am well within my right to just copy and paste his words over here. So I am accusing him of plagerism but technically he published his first so I'll let this one slide. Really though DWG actually watched most of the three games you should click on THIS LINK and read his full review.

The one thing he didn't have was stats, which I've compiled below. Here are a few things I'm stealing and commenting on...

The two things I was most curious about was who would start and how productive would Trevor Mbakwe be. The lineups changed a little but interestingly Devoe Joseph did not start any of the three games, the starting backcourt in all three games was Nolen, Hoffarber and Rodney Williams.

Nolen's stats look like he is pretty much the same guy. Low turnovers, high assists and high steals while not scoring a whole lot. He did however hit 3/6 from behind the arc. But DownWithGoldy was excited about Al Nolen a little bit.

but he still has great court vision, both on offense and defense, and seemed to have a better idea of what he was going to do with the ball when he drove, since he's still unguardable off the bounce. I never saw him pick up his dribble in the lane with no idea what to do with it, his signature play the last three years, and each time he got into the lane he either dished it off or was able to put up a nice looking floater.

I'm a big Nolen fan and before Mbakwe I was convinced that he was our best overall player. He still has no jumpshot but the rest of his game is fine with me.

Speaking of Mbakwe, he started one game and put up some nice stats in all three games. 7 blocks, 21 rebounds and shot .526. He is going to be a really nice addition. DWG refers to him as Reign Man II and I think that is a great nickname. He does not have nearly as many offspring as Shawn Kemp but he will be a similar type of player.

Turns out my wish comes true, because he's very athletic and very smooth. He's not Shawn Kemp of course, because nobody is, but he looked very good on the perimeter both defensively and putting the ball on the floor and driving by a bigger, slower defender.

Mbakwe is our best player.

When looking at the box scores the first thing that jumped out at me was Maurice Walker's stats. The big freshman played 55 minutes (6th on team) and averaged 6 pts, nearly 8 reb and 4 steals. Those aren't all-conference numbers but he played a lot of minutes and produced.

He had very good games, and has great hands with a nice touch around the rim and excellent foot work, but I'm not sure, at least right away, he is going to have the ability to be a big scorer, and may have to rely on o-boards and put backs. This isn't a knock, and he certainly could and probably will develop a more robust offensive game, but I think his offensive contributions this year will be minimal. His contributions on the boards and the defensive end, however, could be the difference between one NCAA game and three.

Nice use of robust. Seeing Walker at the practice before their trip I was unable to really see just how nimble Walker was or get an idea of how much he'll be able contribute. Based on this trip it looks like he'll be the young big man who will contribute this year and Elliot Elliason will almost certainly redshirt.

Devoe Joseph didn't start any games but he played a lot and easily led the team in scoring. Third most minutes and finished the three games with 52 points. No doubt he is our best scorer and I think he is perfectly suited to come off the bench, but that all may change when the real season starts.

He's still a scorer and not a PG, but looked like he could fill in admirably when needed, as we saw last year. In Tubby's system he won't be able to flourish the way he would in a more wide open offense, but he should get plenty of opportunities to shine, and should be the #1 option on most possessions. All Big-Ten potential, if not this year, certainly next.

I'll end with Austin Hollins. The true freshman looks like he'll be the perimeter player who contributes this years out of the freshman class. When I saw him I was unable to see him shoot but he did appear eager to learn whatever a coach was teaching him, especially defensively.

He has a very nice looking jumper, which we knew, but beyond that he wasn't just a jump shooter, he was willing to put the ball on the floor and head to the hoop. He also was one of the few guys who looked like he cared about playing defense. Very impressed. Looking forward to watching him this year.

The link provided talks about each individual player and is worth the read.

I had a table of stats but as I was looking it over I realized some of the numbers were inaccurate so I'm going to look it over again before posting it. Friday morning we'll return you to your regularly scheduled football programming, but I thought some might appreciated a hoops break.