Share All sharing options for: Bill Hancock puts the BS in BCS as he makes another defense of the BCS 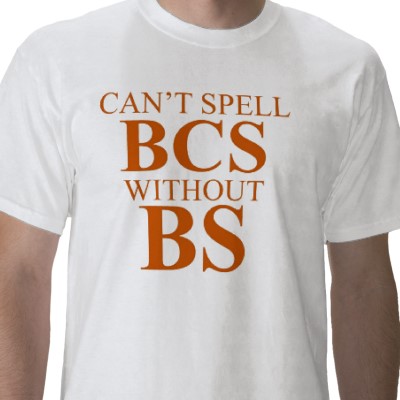 I get e-mails from the Big Ten media relations people that are usually alerts to weekly awards or other significant news releases from the conference. But today I was sent a defense of the BCS by Bill Hancock. Interesting that the director of the BCS pen an article to tell us all just how great the BCS is for not just college football, but for all of us. I kept reading the statement thinking this was a joke, but it was not.

This is not the firs time Hancock has taken to the keyboard to defend his honorable and pefect system. In December the USA Today gave him some space to defend the BCS. SBN's Spencer Hall did his best to rip the indefensible defense. It isn't hard to miss but Hancock is diverting the argument into meaningless anectdotal pats on his own back, Spencer doesn't buy it.

A meaningless bowl game would become more meaningless than already meaningless. Divide by zero: Bill Hancock has just accomplished it.

And even Jim Souhan was quick to jump on the latest Hancock propoganda calling the BCS comical.

It is a sport unmatched for pagentry and atmosphere, for passion and unpredictability, and yet it frequently embarrasses itself.

The BCS is the greatest embarrassment of all. It arbitrarily decides national titles, excludes worthy teams with impeccable resumes, allows cheating to be punished in ways that protects its bottom line, and delays the most important game of the season until the teams playing in it are rustier than a 1976 Dodge Dart.

Hancock is like the university presidents and bowl game officials he represents and defends: He is corrupt. He is defending an indefensible system not because it is the best or most interesting or most profitable system, but because the people whose pockets are being filled do not want to lose their Sugar (Bowl) Daddy.

But let's disect the latest end-around by Bill Hancock...

In the past few weeks, I have received dozens of calls and e-mails from folks who have said, "Congratulations & the BCS got it right again."

Of course, they are calling because tonight's matchup is the one that folks want to see. But for me, "the BCS got it right" has a different meaning.

We had two of the three best teams in the country playing in the BCS Title game. Two outstanding offenses, two dynamic teams who gave us a very entertaining game. But that is no defense to say that the BCS got it right. The storyline of the high-scoring Auburn offense against the staunch TCU defense would also made for a very intriguing matchup. But Mr. Hancock realizes this point, he goes on to tell us why the BCS really got it right.

The BCS got it right because University of Tulsa student-athletes, from my part of the country, were able to visit the USS Arizona memorial and museum. It was the first trip to Hawaii for many. For some, it will be the only time -- only because of a bowl game.

An, the BCS got it right because Kansas State students were able to visit New York City. Many for the first time and some probably for the only time. Maybe some of us take trips to Times Square for granted, and Yankee Stadium for granted, and we are wrong to do that. The BCS got it right because those students had the experience of a lifetime -- only because of a bowl game.

I love picking and choosing anecdotal stories that sound interesting. Why didn't Hancock tell us about the kids from Florida International who were able to visit Detroit. For many of them it was their first and maybe only trip to Detroit. How thrilling it must have been for those young men to bask in the warm sun, walk the safe and clean streets, visit the historic venues gamble at the Greektown casinos -- only because of a bowl game. He also failed to mention how valuable the experience must have been for those visiting Boise, Albuqueque and several other boring destinations to play in meaningless fooball games -- only because of a bowl game.

What those kids enjoy is the free stuff they get for attending the bowls. The $500 electronics gift suite shopping spree to go along with their Oakley sunglasses -- only because of a bowl game.

And it seems that some of us have forgotten what it was like to be 19 years old. And to have someone older and wiser quietly and discreetly create an experience for us and then step back and watch us enjoy it. That's what the keepers of the game have done by preserving the bowl system.

I knew the BCS got it right when I saw the happiness on the faces of celebrating athletes from schools like Florida International and Syracuse and Washington and San Diego State after their bowl victories. And did you see those TCU players dancing and hugging and dashing around the field? Winning their bowl game was way more than simply a great way to end a season -- it moment that will be etched into their hearts forever.

Of course, we know that some people want something different. I appreciate their feelings. But I have to believe that most of those people don't realize they would snatch those opportunities away from the students. But please don't kid yourselves -- it would happen.

I'm starting to come around here, I think the bowl system must be working. The Syracuse kids were happy and so were the TCU players. Let's ask the Horned Frogs if they would rather have a chance to win the Rose Bowl and be told by "someone older and wiser" that regardless of what they've done "the keepers of the game" have told them they are at best the second best. Or would they give up the Rose Bowl euforia for a shot at winning a national championship? It really is compelling logic by Mr. Hancock.

Listen to Alabama quarterback Greg McElroy, on his bowl experience: "We had a blast. If they got rid of the BCS and the BCS bowls, then a lot of teams would not be able to have opportunities like we have had the last couple of years."

Once again this is rock-solid logic. Guess what Greg (and Bill) a lot of teams already do not ahve teh opportunities like you have had the past couple of years. You got to play for a national championship BCS Title because you play in a power conference. If your school is not on THIS MAP, you do not have the opportunities to play for a BCS title. And even if you are on that map there are many listed who really do not have a chance either (does anybody think if Minnesota goes undefeated next year we'll be playing in the title game? No, but we have a better shot than Toledo).

I talked to a Fort Worth man who proudly told me that his grandfather played for SMU in the 1936 Rose Bowl. Can you imagine someone 60 years from now, telling a stranger that his granddad played in the 2025 first-round game between Troy and Wisconsin in Madison?

What a great story with a compelling question to wrap it up and prove his point. But I have a question. Can you imagine 60 years from now someone telling a stranger that his grandad played in the Beef 'O' Brady's Bowl? Troy vs. Wisconsin in a first round playoff game is significantly more significant than 34 of the 35 bowl games on the schedule in 2010-11.

And, for goodness sake, what kind of corrupt cartel would create an arrangement where TCU can win the Rose Bowl? The Horned Frogs played in the Granddaddy of Them All solely BECAUSE of the BCS. And Boise State was THIS close to playing in tonight's game. The BCS is fair, and this year -- more than ever -- proves it.

Oh right. Fair is not giving TCU the opportunity to make their undefeated season a national championship season. If our options are old bowl system were TCU plays in the Las Vegas Bowl or the current BCS system where they get to play in the Rose Bowl then you are correct Mr. Hancock this year is more fair than it could otherwise be. But the outcry is not to return to the old system, what we want is a third option, a TRULY FAIR option. If you want to prove that we have a fair system then allow worthy teams the opportunity to win a real national championship. Don't give us an end-around by saying this is way better for a school like TCU than it would have been 25 years ago.

It is obvious that the BCS has no alterior motives and there is absolutely no coruptness at play here. Things like significant NCAA violations on players particiapting in a BCS bowl game would never be swept under the rug until the beginning of next year's pivotal regular season (remember how the current system is the only way to preserve the integrity of the regular season). The fact that the Sugar Bowl was paying the representative schools/conferences millions of dollars probably had nothing to do with the player suspensions being held off until next year. Nobody should have any reason to accuse those valued "keepers of the game" of coruptness.

In conclusion, I want to ask you to remember that college football really is national treasure. We are very lucky to cover it, administer it, play it, coach it and play b-flat clarinet in its marching band.

I don't think there's anything else in the world to match the passion that we have in college football. Maybe World Cup, but maybe not.

I have a proposal, why have a BCS at all? Mr. Hancock has told us over and over how valuable the bowl system is for college football. We don't need the BCS, all it does is create division and controversy and headaches. This BCS is B.S.

And then, in the wild party after the game, one group of athletes will hold the crystal football aloft. They will be celebrating for the sheer joy of reaching a lifetime goal.

But without even realizing it, they will be rejoicing for those other 68 groups of students who were able to savor the bowl experience this year. When they lift that crystal football, they will be symbolically lifting up the collegiate model. They will be celebrating the game of college football that is thriving in no small part because the BCS got it right.

My Gophers didn't get to participate in a bowl game this year but I'd like to thank Alabama for hoisting the trophy for us last year, what a special experience it was for all of Gopher Nation.

Really, let us forgo the BCS Title game and the notion of having a champion at all. Bill Hancock has convinced me that there are 70 winners in college football every year so why the charrade that one game is more important than any other?

Souhan is right the C in BCS doesn't stand for corrupt as much as it stands for comical. The system is a joke and pretending that the BCS has "got it right" is insulting.