So with the interest and fever of Gopher hockey at an all-time high (ok so maybe it's at an all-time low, or close to it. But still) we here at TDG felt like we should give more coverage to Gopher hockey since this is, after all, THE State of Hockey. And we, after all, are a Golden Gopher blog. We intend to give you game weekend previews, reviews, and whatever else we think you'd be interested in- or what we think is interesting and hope you feel the same way. Or, when we're feeling particularily snarky, things we want to talk about and don't give a rip what anyone else thinks. So pretty much how we've always covered football and basketball.

Now, as GN said yesterday in his recruiting piece that we don't pretend to be the only site that covers Gopher football recruiting, we also do not pretend to be the be-all, know-all, end-all site for Gopher hockey- because we're not. There are some excellent, excellent folks out there covering Gopher hockey, and if you're a fan of the team or the sport or are interested and want to know more there's some excellent sites out there. For straight Gopher hockey two excellent blogs are Roman Augustoviz's Goal Gopher blog in the Strib, and Gopher Puck Live where Ryan Cardinal and Jeff Oftos cover the men's team and Arlan Marttila cover the women. For general college hockey SB Nation's very own Western College Hockey blog covers the WCHA and CCHA (and very soon, the Big Ten hockey conference!), as well as Minnesota high school hockey, and College Hockey News, US College Hockey Online, and Inside College Hockey deliver extensive coverage of everything D1 puck. For Minnesota high school hockey check out Minnesota Hockey Hub.

...I am not from Minnesota.

Yes, I am an outsider. I will be attempting to talk about the State of Hockey's beloved sport played by a group of almost entirely Minnesotans and yet I am not one of you. I know that despite the fact I've lived in this fine state a good chunk of the last 15 years, and despite the fact I hope to live here a lot longer, that I will never truly be considered one of you (and I live with that. Every day). 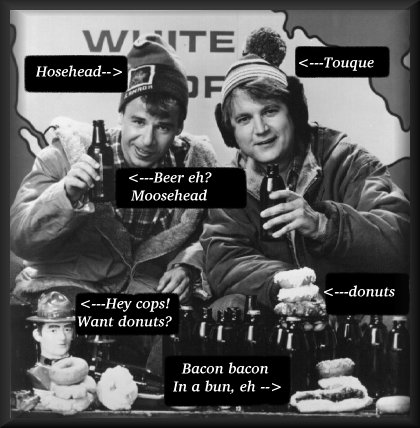 Not only am I not from Minnesota, but I'm not even from this fine country: Yep, I am a hoser from the Great White North, or what Homer Simpson once called "America Junior."

I am from Canada, and I am indeed a Canadian, eh.

I grew up on Canada's frozen western shore in a small igloo village called Vancouver. We had a nice igloo with several sled dogs like everyone else. Like all good Canadian children I learned to hunt yak, make moccassins, build igloos, track caribou, race sled dogs (called "mushing" for those who don't know), and enjoy the 2 weeks of "warm" weather per year where it got above freezing that we called summer. At night we would sit around the fire in the centre (that's really how they spell it in Canada) of town, eat poutine and Canadian bacon, drink beer (the children were only allowed American lite beers since they barely constitute beer) and recite our favorite songs from some of our favorite Canadian musicians like Anne Murray, Conway Twitty, Stompin' Tom Connors, Gordon Lightfoot, Rush, the Guess Who, Our Lady Peace and the Tragically Hip (Please note that at no time did we ever sing anything from Celine Dion, Avril Lavigne, or Justin Beber. We kicked them out of the county for their craptastic music, and what do you do with them? Turned them into stars. No one's fault but yours).

And of course, I played hockey. Not particularily well, but I played on the many vast sheets of frozen lakes we have up there on the tundra. I learned to keep my head up and my stick on the ice, that mullets are good and half shields are for wussies, Don Cherry should be elected Prime Minister, and that only Europeans take dives. I know Wayne Gretzky, Bobby Orr, and Mario Lemieux were the best, cities south of the Mason Dixon line shouldn't have hockey teams, and fighting is good for the game. I know the only Olympic medal that matters (for winter or summer) is hockey gold.

So when my sled dogs took a wrong turn one day chasing a stray caribou and we went south, I ended up in Minnesota. I was pleased to learn that Minnesotans love hockey just as much as Canadians, and that they had two excellent new forms of the game in high school and college that I wasn't familiar with (in Canada the good kids play Juniors from ages 14-20. Almost no high schools have hockey programs and the guys who finish up junior with nowhere else to go play college, but nobody follows it. Nobody follows college sports at all in Canada. It's sad). From WCHA and college hockey I learned the two-line pass is a great thing, full facemasks actually allow you to keep all your teeth, and the game is still great without fighting. And a student section? At a hockey game? Freaking genius. Who knew? Minnesotans, apparently.

I now love Minnesota high school and college hockey, and love the passion of the fans and players. We won't agree about the international game (since Canada is the undisputed king. We are. It's true- well except in the World Juniors where we've now lost 2 straight finals. True story- the Russian team that won gold last night were booted off their flight this morning because they were all too drunk), NHL (I feel sorry for Wild fans. I really do. You're the most loyal fanbase in the league and your reward is...Mikko Koivu? You deserve so much better), beer (I like all beer, but obviously Canadian beer is better), and that french fries should only be served with gravy (and, if you have any, malt vinegar), but we can agree that college hockey is awesome and that we want better things for the Golden Gopher hockey program than we're seeing now.

So hopefully you'll be able to accept my opinions on Gopher and college hockey not only as a non-Minnesotan, but as a Canadian. If you can't, then take off, you hoser!