Share All sharing options for: Gophers and Wolverines Battle for The Little Brown Jug - OPEN THREAD

The Jug maybe isn't the trophy I'd most appreciate winning, but for my money it is the coolest of our rivalry trophies. That may be because it was the very first rivalry trophy in all of sports. You want it back? You gotta beat us. Unfortunately we've been beaten far too often in this series (not just recently). I wish I could by typing some optimism for today's game but that isn't going to be the case. But the Jug is back up for grabs and anything can happen. 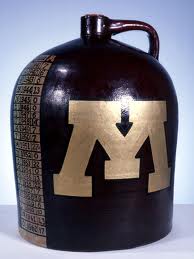 Well, today could be ugly and the reason many of us believe it will be ugly is because of Robinson. If there is some way that we can keep him from making big plays with this legs then this game might not get ugly. We need to keep him from running off huge plays and we need to keep him from manufacturing a lot of third down conversions. Make him beat us with his arm. He isn't a terrible passer but running is clearly his biggest strength.

Offensively it will be interesting to see what we do. Are we going to try and run the ball effectively? Our rushing attack has been getting better throughout the season and I was actually really impressed with Bennett. And really the biggest question with our offense is who will be starting at QB. Maybe Gray is injured, maybe it is an excuse to start the true freshman, or maybe he gets a chance to match Robinson yard for yard.

At the beginning of the year I was more optimistic about this game. But Michigan has been a little better than advertised and we have been worse than I was anticipating. So I'm not holding out hope for a win. What I want to see is some reason to believe that we are getting better. I want to see some identity on offense and I want to see some competitiveness. I want to see a good game.