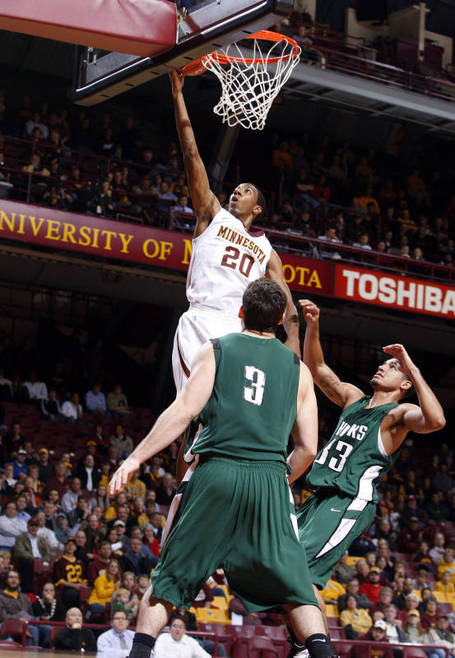 Apparently Gopher Basketball practice was open to the media yesterday and we are being bombarded with updates from all the usual sources.

Marcus has a thorough recap of the point guard battle.

it certainly seems junior college transfer Julian Welch has every bit a chance to win the starting job entering the season. Welch was the first to play point guard with what appeared to be the starting group (dressed in maroon) Monday. Welch and Hollins also rotated at the position with the first unit, but Maverick Ahanmisi scrimmaged exclusively with the second team (dressed in gold). The starters Monday seemed to be Welch, Austin Hollins, Rodney Williams, Trevor Mbakwe and Ralph Sampson III. Andre Hollins then replaced Welch at point guard, but he also played shooting guard with Welch as the floor leader.

I don't think it is a shock that Welch and Andre Hollins will play a lot of minutes on the floor together, but at this point Welch appears to be the leading candidate to run the point. In the end I would bet that Welch and Andre Hollins will play about equal minutes with the hotter hand getting more on individual nights. Mav will certainly get plenty of minutes as well backing up the point, especially if he continues to shoot as well as reported.

Marcus also has high praise for Joe Coleman declaring he will be a fan favorite.

I’m pretty sure he’s already Tubby’s favorite freshman. I can see why. The former Hopkins standout and Minnesota’s Mr. Basketball does so many things well. He hustles. He defends. He finishes strong. He has a high basketball IQ. Tubby said Coleman has surprised him with his outside shooting in practice.

These are just a couple of excerpts, there are plenty more good nuggets in there.

Speaking of outside shooting, everyone is going gaga over Tubby's comments that this is going to be his best shooting Gopher team.

"I think it's the best shooting group I've had in a long time, I don't see any issues with the outside shooting at all."

That seems like really high praise, but I'm not buying it. The best shooting team we have seen under Tubby was the 2009-10 season with Hoffarber shooting 46.7%, Westbrook 41.1% and Joseph hitting 38.8%. That team led the Big Ten in 3-point shooting % and was third in total threes hit. Those three had a good year shooting but beyond that we had nobody who could hit the broad side of a barn. Devron Bostick was a terrible shooter, Al Nolen only took 28 threes and was average at best anyway. My prediction is that we will not match the team 39.9% from that 2009-10 team, but we will be a team with more than three shooters. We will have guys off the bench and guys at other positions who can hit threes. But I'll be surprised if we get even one guy who hits 40% or better. We could put out a line-up of five who are all capable of hitting a three when we need it late in a game. Something like Ralph, Oto, Austin Hollins, Andre Hollins and Welch is a decent shooting group.

I could be wrong, maybe all of the new faces in the backcourt will make us a very dangerous outside shooting team.

Improvements in that area, which will have to be fairly staggering to live up to Smith's claim, rely heavily on how Welch, Hollins and Coleman progress in the Gophers' system. Smith, however, insists it won't be a problem.

"Absolutely. That's the most impressive thing is that we helped ourselves significantly with the recruitment Andre, Joe and Julian," Smith said. "It's totally different in the attack on the ball."

Based on the stats the team has kept from its scrimmages, Hollins leads the Gophers in 3-point shooting, with Coleman second.

"I knew they could shoot," Smith said of his trio of new guards. "I wasn't sure about Joe, but Joe is one of our leading 3-point shooters -- five-out-of-10. He just takes the right shots and makes good decisions about taking the right shot."

This should be an exciting backcourt to watch.

The last published update I'm going to link to comes from Ryan James at GopherIllustrated.com who talked more about the Gopher interior than the rest of the updates.

Ralph is floating and playing more of a four it looks like. Struggling to score inside but hitting his perimeter stuff. Where this could get scary is if teams decide to put their five man (center) on Trevor and play their four (power forward) with a floating Ralph until Ralph starts taking care of business over the top. That means Trevor scoring over a player just as strong or stronger plus having three to five inches on him which would be harder for him.

Speaking of huge, Elliott Eliason is huge and the first team is having a nightmare scoring over the top of him. Elliott is showing he knows how to use his length, we know that he works pretty hard for a big, and thus far has looked like he can play some good defensive minutes off the bench.

Ryan is pointing out something really important here. I think you will see Ralph outside of the paint more this year. Now Ryan sees the potential negative effect of this, and there is some truth to that. But I also think this plays to the skill-set strengths of both Ralph and Trevor. Ralph is not a back-to-the-basket center, he is a finesse guy who can shoot from the outside pretty well for a big man. Trevor is the opposite, he should never shoot from outside the lane. Some nights this will work out great for us others it will not, I think it depends on the opponent/defenders.

It should also be noted that Rodney has been a terrible shooter thus far in practice and will not be contributing to the list of guys making this Smith's best shooting team since he has been here.

Finally getting some actual reports out of practice is fun and it won't be very long at all till we are watching games at the Barn. First exhibition game is one week from today against the Beavers of Bemidji State.