Trevor Mbakwe Tears ACL, Will Miss Rest of the Season...Now What Do We Do?

Share All sharing options for: Trevor Mbakwe Tears ACL, Will Miss Rest of the Season...Now What Do We Do? 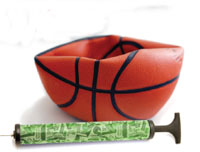 Forrest Gump is a movie full of great lines. My favorite comes after Gump has been running across the country a few times. He has accumulated hundreds of followers who believe he has found the answers to life and are running with him. At one point he stops and says, "I'm tired now, I'm going to go home." The stunned crowd is silent until one guys shouts, "Well NOW what are we supposed to do?" Gopher fans are feeling the same way after preparing themselves for one final season of the beast that is Trevor Mbakwe.

As if the loss to Dayton wasn't bad enough, the Gopher basketball team learned that their best player, their identity as a team and their emotional leader is done for the season; likely his career.

This is awful news, not for just for Gopher fans but let's not forget about Trevor. The kid has endured a lot over his college career and worked incredibly hard to prepare himself for his senior season.

"Trevor's done everything we've asked him to do in his time here at the University of Minnesota. He's been through an awful lot," said Gopher head coach Tubby Smith. "That says a lot about his toughness to be able to recover from the things he has already endured."

I feel for the young man who will have a lot to overcome if he wants to play ball at the next level. This certainly will make the NBA more difficult to attain but there are plenty of other levels of basketball that will pay you to play. I'll be praying for a speedy recovery and I wish him the best of luck in the future. In spite of the allegations that kept him from playing two seasons ago, I really believe that he is a good kid.

This was a team that had an upside of making the NCAA Tournament is things went right and they corrected some defensive deficiencies. But that was with the toughness of their bruising forward who was a lock for a double-double nearly every night. He and Ralph Sampson would pair to be a decent frontcourt that would often have to carry the load for an unreliable backcourt. Most nights you are never sure what you are going to get from Sampson so the rock of this team was undoubtedly Trevor Mbakwe. That rock, the reliability of knowing at the very least you’ll get something out of Mbakwe is missing. There is a void of rebounds that needs to be filled, there is a void of scoring, there is a void in leadership and there is a void in reliability. He did more for this team than just record a double-double consistently.

Those who should be stepping up are Ralph Sampson and Rodney Williams. The upper-classmen are capable of doing so much more. Now is the time that they are needed most. Ralph is far too passive and often fades away in the heat of the battle. Rodney may try to fill the scoring void but I fear he will do it with poor shot selection and even less attention to his defense. If these guys want to fill the void left behind by Mbakwe then Ralph needs to be more aggressive rebounding the ball and he needs to be a defensive force in the paint. Not by letting guys get by him and trying to swat their shot, but by locking down his man and by stepping up big with his body when a guard dares to enter his lane (see tape of the charge Mbakwe took to effectively end the DePaul game). Rodney needs to start getting himself into the right place defensively on each and every possession. He needs to get his head tuned into playing defense right for 40 minutes and demand it out of the rest of the guards by first setting the right example. Offensively he has been making good decisions all year and he just needs to continue to be aggressive at the righ times, I fear with Mbakwe out he will be shooting more jumpers. What I’m asking here is for Ralph to be more aggressive and Rodney to be more disciplined on the floor. Over their careers they have not shown that this is in their nature so I'm not writing what I believe they will do, rather what the need to do.

The other guys need to shed the label of "new to the program" or "young and learning." Those days are over for Andre Hollins, Julian Welch, Elliott Eliason, Oto Osenieks, Chip Armelin and now Andre Ingram. Defensive lapses and careless turnovers need to go away. At times Welch and Dre Hollins have been good offensive weapons but at other times they have careless turnovers leading a sloppy offense. The offense is going to stagnate for a while until we hopefully find some new rhythm and flow and source of scoring.

The next two games are against BCS level schools but then the schedule gets easier than it was before the Old Spice Classic. Virginia Tech is good enough that we are likely going to struggle in our first game without Mbakwe. USC is actually pretty bad, for example they lost to Cal-Pol by 36 points, but I'm still not feeling too confident in that one with our double-double force. After that we get Appalacian State, St. Peters (1-4), Central Michigan and NDSU which should give our new team a chance to find themselves before the Big Ten.

The injury to Al Nolen totally derailed our season last year. This year we have the month of December to adjust before hitting Big Ten play. This is going to have to be the coaching job of all coaching jobs for Tubby Smith. He has the time, he has some athletes but he needs to get every ounce of talent, scoring, defense and effort out of the remaining roster.