Time for a Gopher Baseball preview!

Share All sharing options for: Time for a Gopher Baseball preview! 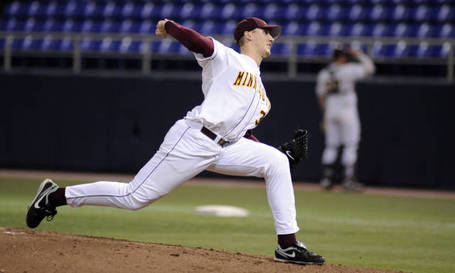 It is currently cold (though, not nearly as cold as last week) in the North Star State, but college baseball gets things started very early so while the ground is frozen and feet of snow are on the ground, Gopher baseball has been working hard as they prepare to defend their conference championship. Their season is going to be a challenging exercise of away game after away game due to the collapse of the Metrodome. But arrangements have been made and the Big Ten doesn't feel sorry for the conference's most successful program.

But first a little Gopher baseball history lesson. The Northern states are not known for their college baseball but Minnesota is the most successful Big Ten program in the...well Big Ten.

Gopher baseball is the defending Big Ten regular season and tournament champions. They went on to the NCAA Regionals as a 4-seed (out of four teams) and quickly jumped out to 2 consecutive upsets. All they needed was one more win in the double-elimination bracket, but Cal-State Fullerton flexed their muscle and beat Minnesota twice to advance. The good news is that the Gophers return a good chunk of their roster to defend those titles as they look to get back to the NCAAs and advance to the SuperRegionals this year.

This year they are the preseason favorites to repeat mostly due to their pitching staff and solid young nucleus of position players. If you are looking for a 1,000 ft overview and only want a few bullet points here are a few players to pay attention to.

But it takes so much more than that to win another Big Ten title. Gone is #1 starter Seth Rosin, 1st round draft pick Michael Kvasnicka and longtime starting catcher, Kyle Knutson. Those are all three significant losses but the good news is we have the Gophers are returning 24 kids from last year's team so this team has great depth and balance.

MUCH more detail after the break...

The real strength of the 2011 Gophers is their pitching. Yes we lost Seth Rosin who was dominant down the stretch winning his last five starts including an 8 inning, 1 ER win over Cal St Fullerton in the Regional. Anyway he is in the minors now and we wish him the best. But we return basically everybody else losing only 2 pitchers, 75% of our innings pitched to be exact.

The top end of the rotation and the back end of the bullpen are about as good as you will find in the Big Ten. T.J. Oakes and Phil Isaksson are a great combo of Friday-Saturday starters. Scott Matyas is arguably the best closer in the conference and we return about 90% of our bullpen innings. Lubsinsky is my best guess at the Sunday starter but I wouldn't at all be shocked to see the freshman Wendle or Rasumssen take it from him. We'll see.

My guess at our starters...

#1 - T.J. Oakes - the son of the Gopher pitching coach was the surprise starter on the 2010 staff and according to Baseball America is the preseason Big Ten Pitcher of the Year. That is high praise for the sophomore. Oakes pitched well in the game two win of the Regional holding New Mexico to 2 ER over 7 innings. His 4-3 record isn't all that impressive but the Gophers last lost a game he pitched back on April 24th. His next six starts were all Gopher wins, even if he only got credit for a couple of those.

#2 - Phil Isaksson - the senior, lefty from Wisconsin has had a solid Gopher career. He earned 2nd team All-Big Ten last year as the Gophers #3 starter. Isaksson used a nice curveball to strike out 57 last year, finished with a 6-2 record and is primed to be a dangerous Saturday starter.

#3 - Austin Lubinsky - is the likely Sunday starter for the Gophers. He earned seven starts last year as a mid-week starter in the Gopher rotation. Lubinsky isn't a lock to start in the three-man rotation but given his experience he would seem to have an inside track.

#4 - Luke Rasmussen - senior lefty who make 21 appearances last year with four starts. Rasumussen was 6-0 career heading into last season but finished 2010 1-4 with a 5.60 ERA. He is very good out of the bullpen but given that he's a senior with plenty of innings under his belt he too should have a shot at the Sunday starter role.

#5 - Tom Windle - Last year we had a true freshman step up into a primary starting role and if one were to surprise and move into the weekend starting rotation Windle is the most likely candidate. Maple Grove native who was tabbed by Baseball America as one of the top 5 newcomers in the Big Ten. Expect some mid-week starts for Windle against the Dakota schools or Missouri Valley Conference schools.

Closer - Scott Matyas - is one of the best closers in the conference and on some preseason lists for closer of the year awards. The senior from Wisconsin (thank you Badgers for not having a baseball program) has 25 career saves which is easily a career record for the program. He finished last year with eight saves, a team best 2.19 ERA and 60 strikeouts in just 24 innings pitched. Having Matyas is a great luxury for the Gophers and is key to another conference championship

Bullpen - Cullen Sexton -senior who pitched in 19 games, 24 innings factoring in only one decision which was a loss. According to his Gophersports.com bio he hits low 90s with his fastball. Certainly another key component of this experienced pitching staff.

Bullpen - Billy Soule - as a freshman Soule appeared in 21 games with 50 IP. A big piece of the puzzle out of the bullpen, especially if he takes a big step forward from his FR to SO year.

Bullpen -Scott Fern - 11 games and 23.2 innings last year as a junior. Fern has 75 innings pitched over his Gopher career and the senior should see plenty of innings as he helps lead the Gophers to his third conference title over his career. 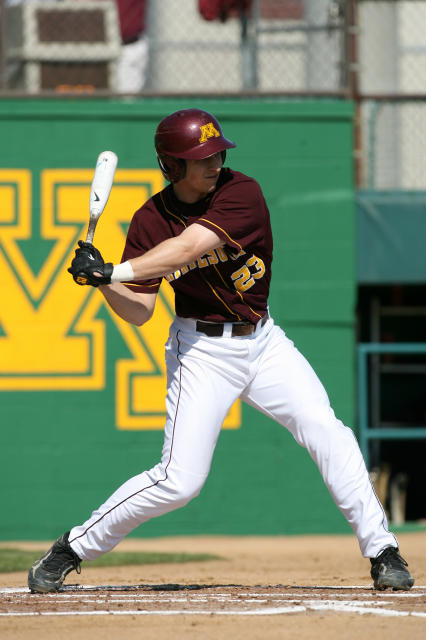 Alright so that is our pitching staff, what about our lineup? Once again we return an awful lot of starters but projecting the lineup is going to be a bit more tricky as position changes are frequent and guys who I assume will be starting at certain positions are listed as another on the roster. Based on lineups from the end of last year this is my best guess at a starting lineup for 2011. The infield is pretty well set while the outfield and catcher are a bit more up in the air.

C - Kurt Schlangen - played a lot of OF last year as a redshirt freshman starting in 22 games and appearing in 18 others. Nick O'Shea is also listed as a catcher but I would assume you don't want to have your best offensive player moving to behind the plate if you can help it. The only other catcher on the roster is a true freshman, so I believe Schlangen will be your opening day starter behind the plate.

1B - Nick O'Shea (pictured right) - All B10 1st team last year finishing with 13 HR, 60 RBIs and hit .333. Also started all 62 games. O'Shea is surely going to hit clean-up and will be the key hitter in the Gopher lineup. The junior should be in the running for Big Ten Player of the Year, assuming he puts up great numbers again. His brother is a redshirt freshman pitcher on the team.

2B - Matt Puhl - Sophomore who started 54 games last season and hit .335. Puhl is listed on the roster as a SS but considering how good of a defensive shortstop AJ Petterson is I find it hard to believe he'll be starting on the left side of the infield. Puhl is solid defensively and should be your starting 2B for nearly all Gopher games this year.

SS -AJ Petterson - As a freshman Petterson was a Baseball America Freshman All-American. He followed that up with a very good sophomore year that culminated in making the Big Ten All-Tournament team. His average dipped below .300 after hitting .353 as a freshman. If his hitting bounces back, this Gopher offense is going to become very potent.

3B -Kyle Geason - Another 62 game starter from a year ago (along with O'Shea), the junior is a lock at 3B this year. Geason hit .278 last year raising his average 39 points from his freshman season. He is very good defensively and will likely be an important bat in the lineup. His four HRs and 39 RBIs are the second highest returning power numbers.

LF - Andy Henkemeyer - alternated starting in LF with Schlangen last year and I have no reason to believe he won't be the everyday starter this year as a junior.

CF - Justin Gominsky - Gominsky might be the single most important player on the roster this year. He missed most of 2010 due to a knee injury but the former freshman All-American will be counted upon heavily to be healthy and productive at the top of the lineup. As a freshman he hit .338 and had 11 steals. Count on Gominsky to start at CF and hit lead-off.

RF - Trip Shultz - young guy who started 20 games last year as a sophomore. Shultz has some power potential and if he isn't starting in the OF he may be our DH as well.

DH / Util - Troy Larson - the primary CF last year when Gominsky was lost for the year is really a converted middle infielder. I'm going to assume that Larson will move back into a utility IF role and serve as the team's primary DH. As a redshirt FR he hit .280 and assuming his bat improves a bit, we'll need it in the lineup. Larson also has good speed stealing eight bases last year.

Bench - Ethan Liederman - played in a handful of games last year as a redshirt freshman outfielder. Leiderman will be in the mix for playing time.

Bench - Sam Ryan - can play multiple positions but missed most of 2010 with a shoulder injury. Ryan should be a regular sub in the infield.

Bench - J.T. Canakes - left-handed bat who played in 14 games a year ago. The outfielder will likely see more playing time as a sophomore.

As you can see we are returning an awful lot of innings and production. The lineup will be hard pressed to replace Kvasnicka and the experience of Knudson but there are a number of guys coming into their junior seasons who have been through the battles and should be ready to take their games' and the team to another level.

One thing that is certain, this team will be very good defensively. That is a John Anderson trademark and he has some very skilled players in his lineup. This team is the team to beat in the Big Ten and it will be fun to see if they can take care of business with the target on their back and without a home to play their games.