Share All sharing options for: Michigan Football and the Michigan Jobless Rate

Two staples in the history of the State of Michigan are the automobile industry and the University of Michigan. All apologies to Spartans fans, but the Maize and Blue have more name recognition across the Nation. While recently tracking some information on Ford Motor Company stock, it occurred to me that the employment crisis in the Motor City closely mirrors the Michigan football crisis.

First, let me emphasize that in many ways Detroit has been the symbolic engine that keeps America running. New York and California get all of the glory, but cities such as Detroit and Pittsburgh have the heart and the guts to do the hard work that actually builds and produces tangible things. In my opinion, the recovery of Detroit's economy will be a bellwether for the recovery of the Nation.

Now, the following trends are probably coincidentally correlated since a similar trend has not occurred at Michigan State. That being said, take a look at how closely the Sagarin ratings for Michigan football follow the jobless rate in Michigan: 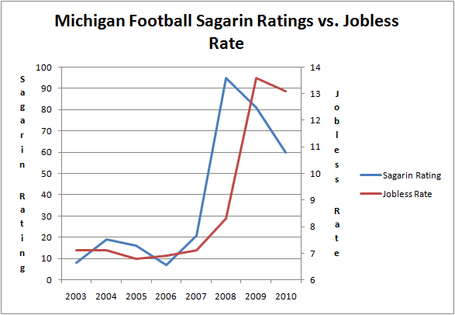 I recently drove a new Ford as a rental, and I was genuinely impressed with the quality of vehicle that they are turning out these days. I fully expect the automobile industry in Detroit to make a comeback. the question is how much of a comeback will be made, and how long it will take.

Michigan football follows a similar parallel. While many Michigan fans are dissatisfied with the Brady Hoke hire, I won't be surprised if he orchestrates a comeback for the program. As with the auto industry, the question will be how much of a comeback is made and how long it will take.

I do think that one parallel between Michigan football and the Michigan economy will hold true: the definition of a successful recovery will be in the eye of the beholder. Will a return to former glory be the expectation, or will something close to it be good enough?