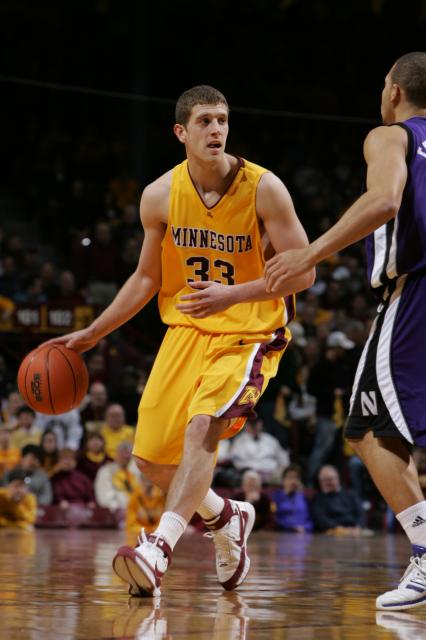 A while ago I thought it would be interesting to contact Jamal Abu-Shamala to find out his thoughts on playing for Tubby Smith, his post-Gopher basketball career and maybe even his thoughts on the current Gopher squad. JAS was kind enough to indulge me and gave some really good the thorough answers to my questions. Let's not waste time with more of an intro and get to the questions.

TDG - Let's start going WAY back to high school. Your Shakopee team won state and you won several awards before you made your way to Dinkytown. A lot of us played high school basketball and getting to or winning state was a relatively attainable goal even if we were not D1 athletes (if anybody wants me to share my glory days of high school basketball I'd be more than happy to share). But winning state must have been a lot of fun. What is the first thing you think about when reminded of your high school playing days and what was it like to win state?

Winning the state championship in high school was one of my most memorable and biggest accomplishments for me as a basketball player. When I moved to Shakopee in the 8th grade I saw that we had a lot of talent in my class and I always felt that if we stuck with it and continued to work, we could win state. Winning state was always my biggest goal from that point on followed by playing division 1 basketball. I started to play varsity my sophomore year and all three years I played varsity we made it to state but my sophomore and junior year we got knocked out in the first round. After losing my junior year, I remember thinking of how disappointed I was after losing and decided to dedicate everything I do to finally win state the next year. The one thing that sticks out to me about the team my senior year was how close were were and how much we enjoyed hanging out together. We all worked really well together and had one common goal. We had a scare the first round of state but we ended up pulling out the win and we didn't look back from there. I gained so much confidence from winning the state championship and really cherish the memory of that season.

TDG - Tell us about your recruitment. You were recruited by the Monson staff so tell us about that process and who else was vying for your services. And ultimately what led you to the U?

After my junior season, I ended up playing for the Minnesota Magic for the AAU season. We had a very good team; I played with Travis Busch, Blake Hoffarber and Cole Aldrich to name a few. I had interest from many division 2 schools after the Summer and some possible walk-on opportunities for a few Big Ten schools such as Wisconsin, Iowa and Northwestern. The most interest I had was from John Beilein of West Virginia. I was going to take a visit there to see if it was some place I would want to play but right before I was going to go they informed me that they no longer had an interest. During that Summer, I was really hoping I would be contacted by the U and after the West Virginia recruitment fell through and my Shakopee team won the State Championship, I received a call from the Minnesota coaching staff and they wanted to set up a meeting. That was one of the most exciting moments of my life and I was really excited to meet with them. After meeting with the coaching staff, they informed me that I could walk-on and from there I took it as a challenge and was really excited to have the opportunity I was waiting for.

TDG - Your coming out game as a Gopher was on the road against Arizona State. 14 points, 3/3 from behind the line and most importantly a Gopher win in overtime. Was this game any sort of a milestone game for your Gopher career? Did you feel any sense that this performance gave the coaching staff more confidence in you going forward?

I remember that Arizona State game like it was yesterday. I remember I was really excited because that game was the first nationally televised game of the season and I knew I was going to get a chance to play because our two starting guards (Vincent Grier and Moe Hargrow) were injured. My role on the team that season was very defined, which was to play tough defense and hit open shots so it was easy to focus on what I needed to do and my teammates did a great job helping me. That Arizona State game gave me a big confidence boost and it really continued to grow from there. After that game, I knew what it would take to play at the division 1 level and really looked forward to improving and playing more. I do think that game gave the coaches confidence in me to play a bigger role especially the way we won that game. I have to give the coaches a lot of credit for working with me and preparing me leading up to that game.

TDG - You were able to play for your final two seasons under Tubby Smith. What kind of changes did he bring to the program and tell us what it was like to play for him?

The first and most important change that Coach Smith brought to the program was a winning attitude and a presence. He demanded to win and was willing to do whatever it took to make a change. We had a lot of talent on our roster, but we just needed a little guidance and Coach Smith was someone that could show us that. Coach Smith has a blue collar work ethic and his main objective is to outwork our opponent. He is someone that demands effort on every play and is a coach that is always expecting more no matter how well his team is playing. I learned a lot from him in two short years and was very happy to be a part of getting Gopher Basketball back on the right track.

Playing in the NCAA tournament was definitely one of the highlights of my career. It was unbelievable to be a part of one of the most popular sporting events in the world and it was even more rewarding to do it with a Minnesota program that was struggling for many years leading up to my senior season. There was a lot of excitement and pressure playing in the NCAA tournament and a lot of preparation leading up to the game. It was weird because it felt like a whole new season because of the excitement surrounding the event. Texas had a lot of NCAA tournament experience and it showed down the stretch of the game. Experience in the tournament is key to any programs success because once a team has been there they have more confidence and are better mentally prepared for the big stage. Now that Minnesota is coming off two consecutive tournament appearances it gives all the players more confidence and also helps lure in some of the bigger recruits because they see the team as one that can compete with the best and find it attractive to play for a team that will consistently make the tournament.

TDG - After your Gopher career you quickly became a member of the Jordanian National team. I'm not familiar with how you are eligible to play for Jordan, tell us about that process. How did you even express interest in playing at this level and what was the tryout process like?

After my Sophomore year I had the offer to play with the Jordanian National Team after some of the people that represented basketball in Jordan were watching a game on ESPN and saw me playing. They recognized my name and knew it was from Middle Eastern origin and contacted me about playing with the National Team the following season. I decided not to go that Summer because of the coaching change but stayed in contact with them and kept it as an option for my future. My Father is Palestinian and was born and raised in Palestine so I was able to play for Jordan because roughly 65-75 percent of Jordan is Palestinian and there is no Palestinian state. After my Junior year I talked with the coaching staff about going to play with the national team and we decided that it was a great opportunity and it could do nothing but help my game and give me valuable experience playing on the international level. I went to play that Summer and had an unbelievable experience. I learned a lot about the game of basketball and grew a lot as a person and a player. I went back the next Summer to help Jordan qualify for the World Championship but then there were some major political problems with sports in the country which ended up leaving me without any opportunities to play the following year. I was forced to sit out the whole last season because Jordan's professional league collapsed but fortunately was able to continue playing this season after making the Sioux Falls Skyforce NBA Developmental League team.

TDG - What has been one or two of your favorite experiences playing for Jordan?

There were so many experiences that I could list but I would have to say the most valuable to me were meeting family I had never met, learning about different cultures, making great relationships with teammates and being able to travel the world at such a young age. I learned so much in just two Summers playing over there and met so many good people. I was able to travel to China, Taiwan, Turkey, France, Italy and Qatar and learn so much about the world. Qualifying for the World Championship and playing against some other great national teams were both unbelievable experiences that I will never forget.

TDG - Back to the Gophers. How closely are you able or have you been following the current squad? What are your thoughts on the 2010-11 team, how well do you think they will fare in the Big Ten?

I have been keeping up with the current team as much as I can and have been really impressed by their progress. I thought going into the year that this would be the best team in some years at Minnesota because they have great leadership in Blake Hoffarber and Al Nolen, a big front court, and most importantly great camaraderie. I still stay in touch with a lot of the guys and enjoy following their progress. They are a great group of guys and I think once they get Al Nolen back, they can really make a run late in the season. Staying healthy is key to any team hoping to make a run so if they can do that, they will be tough to beat come March.

Good stuff and a really heartfelt thanks to Jamal for this e-mail interview. Often times asking questions through e-mail means I get back short answers that don't really tell us much, but Jamal took the time to really answer the questions thoughtfully and fully. Thank you.