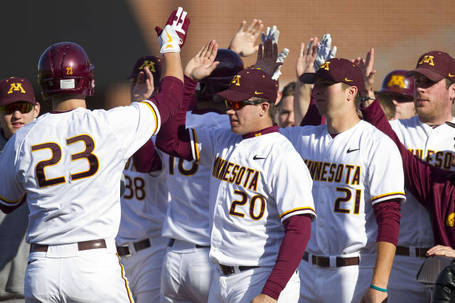 A highlight on the Gopher baseball schedule every year is the Dairy Queen Classic. Each year the Gophers bring in a few very good teams from around the country north to play in the Metrodome. 145 future MLB players have participated in the DQ Classic over the years. Obviously playing in the dome this year would be a major challenge so the Gophers are "hosting" the 27th annual DQ Classic in Tuscon, AZ.

Typically this is a great opportunity for baseball fans in Minnesota to get their fix while staying warm under Teflon sky of the HHH Metrodome. If you haven't heard the roof collapsed on the Viking's season Dome and the vast majority of the Gopher schedule had to be moved. This was also a great way for Gopher baseball to get to host some quality teams rather then spend the first couple months of the season on the road like many of the northern teams are forced to do. But it happened and the Gophers have now become road warriors.

First pitch of the tourney will be at 2:05 this afternoon with Minnesota facing the South Alabama Jaguars. T.J. Oakes will take the mound for game one. Oakes is 0-1 with a 3.86 ERA in seven innnings of work in this young season. The Jaguars are predicted to be a middle of the pack Sun Belt team led offensively by senior 3B, Jake Overstreet. The are currently 5-3 having defeated Alabama but also losing to the likes of Nicholls State and SE Louisiana.

The Jaguars are led by Jake Overstreet who leads the team in home runs (2), runs (8) and RBI (11). Logan Kirkland is batting .429 with six runs, while Nolan Earley is batting .367 with six runs and four doubles. The Gophers are set to face senior righthander Garrett Harris who is 1-0 with a 3.00 ERA and nine strikeouts in 12.0 innings.

On Saturday the Gophers will take on Washington State. Phil Isaksson will start for the Gophers on Saturday. He has a 0.87 ERA with no decisions in 10.1 innings this season. He will face a Cougars squad that is 4-1 this year and looking to make their third consecutive NCAA Tournament. They are expected to finish middle of the pack in a tough and deep Pac 10. Early on they are hitting the ball well, especially Matt Argyropoulos...

Washington State enters the tournament with a 4-1 record after defeating UC Santa Barbara 5-1 and 7-3 in a seven-inning game. Matt Argyropoulos enters the tournament batting .533 with five runs, two home runs and six RBI. Jason Monda is also batting .471 with two runs and four RBI, while Taylor Aar leads the team with six runs. Minnesota will face senior righthander James Wise who is 2-0 with a 1.59 ERA and 12 strikeouts in 11.1 innings. The Gophers are 0-2 against Washington State, which includes a 6-5 loss on Mar. 5, 1999 in the Dairy Queen Classic.

Game three will be Austin Lubinsky taking the mound against Oklahoma State. Lubinsky is 1-1 with a 2.45 ERA. The Cowboys are 6-2 thus far and beat the Gophers last year in the DQ Classic 16-9. A year ago the Cowboys made the NCAA Tournament and return All-Big 12 second baseman Davis Duren. Okie State was picked by the coaches to finish 6th in the Big 12 this year.

Oklahoma State is led by Dane Phillips who is batting .438 with eight RBI, four doubles, three triples and seven runs. Zach Johnson has a team-high nine runs, a home run, seven RBI and is batting .360. Luis Uribe also has a team-high eight RBI on the season. Minnesota will face freshman righthander Jason Hursh who is 1-0 with a 1.69 ERA in 10.2 innings of work.

The Gophers offensively are led by Nick O'Shea who is hitting .478 this year with 1 HR and 7 RBI in six games.

O’Shea has five multi-hit games for Minnesota this season, collecting two hits in all of those contests. O’Shea had a home run and all seven RBI last week in three games at the Wake Forest Tournament. Junior shortstop AJ Pettersen is also batting .417 and is tied with a team-high five runs, while Justin Gominsky is coming off a week that saw him reach base 10 times, go 6-for-9, steal three bases and score five runs.

This is a solid field, one with a couple other solid teams but also teams the Gophers are certainly capable of beating. Both Washington State and Oklahoma State are coming off Regional seasons and are expected to be in or near the field again this year. In the most recent regional projections Washington State is the only team in the DQ Classic who is projected to make the NCAA Tournament.

Much of this preview will be taken directly from the U of MN release.