Share All sharing options for: Here We Go - Gophers Seniors Playing Their Last Game at The Barn

College careers fly by. Freshmen come in thinking they have a lifetime ahead of them in a Gopher uniform and before you know it they are preparing for the final home game of their career. The Gophers are losing just two seniors this season but they both put their stamp on the Gopher record books and will not soon be forgotten.

Blake Hoffarber and Al Nolen were the recruits Tubby Smith inherited from Dan Monson. The two local guards were both three-star level athletes who were lightly recruited who decided to play for Dan Monson and were surprised to start their career with Tubby Smith as their head coach. They are the first to play four years under Tubby at Minnesota, let's take a look at their careers and legacy before their final (regular season) game at The Barn. 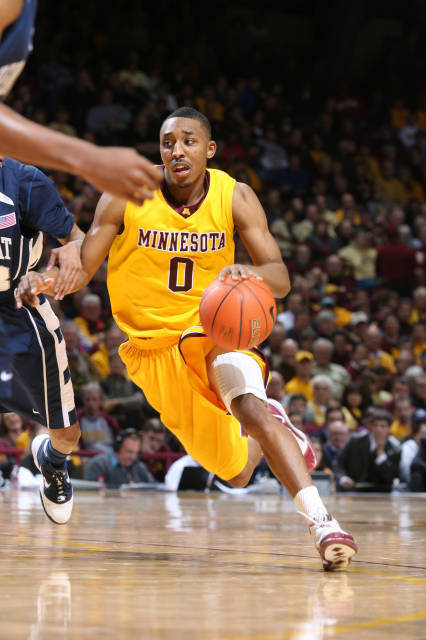 Al Nolen wasn't a lightly recruited point guard out of Minneapolis-Henry, he was virtually an unrecruited point guard out of Minneapolis-Henry. His only reported scholarship offer was from Minnesota. He took it and turned out to be a great find from Monson's staff. His first game as a Gopher Nolen scored nine points, had three steals and recorded six assists. For the rest of his career you could expect stat lines like that each and every night with points moving up slightly every year. In his sophomore year he really began to establish himself as one of the most important guys on the floor with his 18 point, 5 rebound and 5 assists game in the upset win over Louisville. There was no doubt that he carried us that day.

Through his first two seasons he was on pace to be the Gopher career leader (or really close to) in steals and assists. But injuries and academic suspension became limiting factors for Al in his junior and senior seasons. After playing in all 66 games during his first two seasons he missed 17 games as a junior and coming into the Penn State game he has missed 15 games as a senior. Put those together and Nolen has missed an entire season, yet still ranks 3rd all time in assists and 2nd in steals. But perhaps the most telling stat is the Gopher's rate of success with Nolen. Over the last two seasons the Gophers have had a 23-8 (.742) record with Nolen in the lineup and 15-17 without (.469). Granted, Nolen has primarily missed Big Ten games, which skews the stats but even in just Big Ten games the Gophers are 7-6 with him and 7-15 without.

Nolen will be missed. Defensively he was one of the best on-the-ball defenders I've seen. He harassed opposing guards from baseline to baseline and his career steals numbers are statistical proof of his defensive prowess. Even while essentially losing a full season he is just 10 steals shy of being the Gopher all-time leader. Offensively he is the one guy on the roster who can penetrate to the lane drawing defenders and he excelled at pushing the ball in transition finding open shooters or getting to the rim for two. 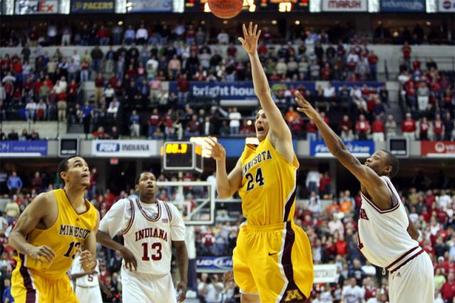 More often than not that shooter was Blake Hoffarber. When he first arrived on campus he was known as that lefty from Hopkins who won an ESPY for making a shot from his butt in the state title game. But nobody would have believed that Hoffarber would end up as a top 20 scorer and the best three-point shooter in Gopher history.

What has maybe been most impressive is how Blake has expanded his game over his career. After really struggling during his sophomore season Hoffarber began to become more than "just a shooter." As a sophomore 79% of his shots were three-pointers. As a junior it dropped to 76% and this year it is about 64%. Much of that is because he spent the last 15 games playing point guard instead of his natural shooting guard position. But even when Nolen was starting at point, Hoffarber was showing more ability to use the dribble to get to 15-18 feet and drain the mid-range shot. And his passing has been really impressive this year. His assists are way up, even games with Nolen in the lineup, and he is seeing the floor like nobody else in a Gopher uniform.

Hoffarber's game has grown but he will always be remembered as a shooter. Perhaps his biggest shot came in his first Big Ten Tournament against #22-Indiana. Hoffarber scored only 5 points but two of them was the turnaround game-winner. This year he has had a number of big games scoring 20+ four times including 26 in the big win over Purdue this year. In that game he hit four threes and was also 6/9 from inside the arc to go along with his four assists.

These are a couple of great Gopher guards. They'll be missed not only because they are productive and talented but because we do not seem to have anyone waiting in the wings to replace what they bring to the floor.

Without asking them I am quite certain both are incredibly disapointed in how their senior season has played out. They were set to be the first to take the Gophers to three consecutive NCAA Tournaments. But really it came down to one key injury and a transfer that depleted depth, shuffled responsibilities and left voids too much to overcome in the Big Ten.

They'll have one last chance on senior night to notch a win before the Big Ten Tournament. The season has sucked but taking some time to remember their careers is certainly appropriate. Blake Hoffarber and Al Nolen were good kids and talented basketball players.

** Please include this text at the bottom of your post** PLAY THE MARCH TO THE CHAMPIONSHIP GAME AND YOU COULD WIN A TRIP FOR TWO TO LAS VEGAS! LOOK FOR THE CODE INSIDE SPECIALLY-MARKED PACKAGES 12-PACKS OF BUD LIGHT ENTER CODE AT FACEBOOOK.COM/BUDLIGHT ----- No Purchase Necessary. Open to U.S. residents (except CA & TX) 21+. For a chance to win a Grand or First Prize, Game Period 1 begins 3PM CST on 2/14 & ends 3PM CDT on 3/18. For a chance to win a First Prize only, Game Period 2 begins 3:00:01PM CDT on 3/18 & ends 3PM CDT on 4/30. To participate, obtain a Code from inside specially-marked packages of Bud Light beer or to request a Code without purchase, visit budlight.com/freecode during a Game Period. Limit one (1) free Code request/day/person or email address. To play, text HOOPS to BEERS (23377) & follow prompts or visit budlight.com/freecode & follow instructions. See Official Rules inside package or at budlight.com/freecode for complete details. Void in CA, TX & where prohibited. Enjoy Responsibly – ©2011 Anheuser-Busch, Inc., Bud Light® Beer, St. Louis, MO