The Faces of Gopher Football

Share All sharing options for: The Faces of Gopher Football 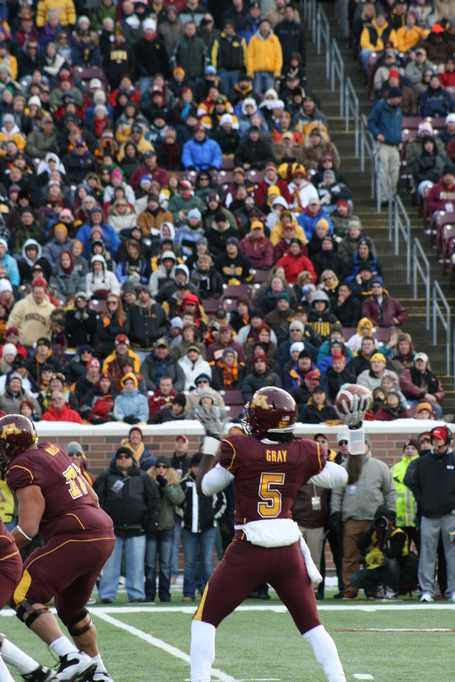 Every team has that one guy, maybe one guy on each side of the ball, the first guy you think of when you think of that team. This isn't always necessarily the best player, last year it probably would have been Adam Weber. The year before it was Eric Decker. It doesn't necessarily have to be our best player but he has to clearly be the face of the program. With Weber gone and no real standouts on defense it got me thinking about who are the offensive and defensive faces of the 2011 Gopher Football team?

OK, so this one is pretty easy. MarQueis Gray is the face of Gopher Football. We have seen him on the field enough to know that he is a dynamic and exciting player. When we have our first offensive snap at USC on September 3rd (on ABC), every single Gopher fan will be holding their breath and watching #5. Most believe if this team is going to win more games than expected it will only occur if Gray lives up to or surpasses expectations.

This is more than just because Gray is the man under center. One could make an argument for Da'Jon McKnight. But Gray is the man this year largely because of the high expectations around the highest ranked recruit in Gopher history and his "faceness" will only grow as people realize that he is an engaging and a very likeable person. I have not had one-on-one time with Gray, but in the limited exposure I have had with him he is clearly a very bright, funny and polite young man. I have no questions about his charisma, I have no doubts about this talent and I even have confidence in his leadership abilities in the offensive huddle. What may bring him back down a notch is we don't know if he can read a defense or if he can hit open receivers and lead this offense with his arm, head and legs.

Nobody who has seen him questions his running ability. But reports out of spring practice (and limited evidence in limited snaps during his FR and SO years) indicate that consistently being able to hit open receivers may be an issue. I don't know that this will kill his status as the face of the offense this year. People will be patient, to a degree, because expectations are low for the program. And many will be patient because they believe he should have been given last season to experience the growing pains of being a starter in the Big Ten. His mistakes in 2011 will be blamed largely on Tim Brewster and to some degree Adam Weber.

If Gray has a terrible 2011, we can revisit this debate next year. But as of right now he is the unquestioned face of the offense and likely the team. 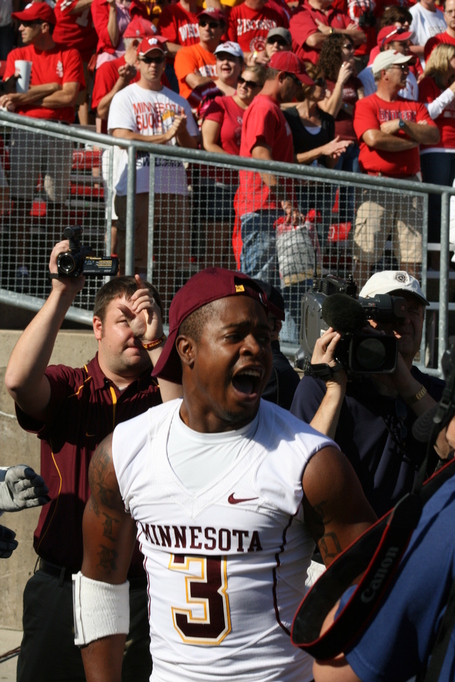 This one is not as easy. In fact ask 10 different Gopher fans and you might get 10 different answers, which leads me to believe that we just do not have a face of the 2011 Gopher defense. The position is wide open and someone has an opportunity to establish themselves as the leader of this defense and the face of the program for half of the team's snaps. Here are a few worth candidates.

Kim Royston is really good story. He may start the year as the guy that has the most eyeballs on him play after play. There is the local angle, he came back to Minnesota after a couple years in Madison, he missed his senior season with a broken leg and has been granted an extra year to play one more year for the Gophers. If healthy and if he plays well I believe that Royston will be the face of the Gopher defense. But those are two significant ifs. In 2009 Royston started 13 games, was third on the team in tackles, had 6 pass break-ups and 1 interception. The Gopher secondary is very young and largely inexperienced so Royston's leadership and hopefully stability could be invaluable assets. He could be the glue that holds the inexperienced secondary together and become the face of the Gopher defense for a year until it is taken over by someone else.

I'll stick in the secondary for another worth candidate for the face of the defense. Troy Stoudermire might not start the season as the one most are watching but he may quickly establish himself as a fan favorite and the best player on the 2011 defense. Stoudermire is making the switch from WR to corner and may have been the one defensive player who received the most praise during spring practices. Numerous reports of Stoudermire's physical play and ability to make plays on the ball are not reports we are accustomed to hearing. It is very possible that he becomes our best player in the secondary who locks down opposing Big Ten receivers. Marcus Sherels also made the switch from offense to defense and he was solid in his coverage. His problem was that he hit and tackled like a receiver. If Stoudermire continues to lay the wood as he did in spring ball and if he makes on the ball consistently then it is easy to see how he could become a fan favorite and the face of the defense.

Next candidate is the biggest unknown on the entire defense. Brendan Beal (pictured right) is a former highly ranked recruit who was offered by and chose to attend Florida. Yes, the Gators. When playing time and whatever other issues he had in Florida surfaced he chose to transfer to Tim Brewster's Gophers. By all accounts, Beal has the size, strength and ability to be a very good Big Ten linebacker. As the Mike linebacker he is in position to be the quarterback of the D and rack up a lot of tackles. One could make a very strong argument that Lee Campbell was the face of a solid defense in 2009. Beal could match Campbell's toughness and ability to get his nose near the ball carrier on most rushing plays that come his way. Some big hits and 120 tackles could easily make him the star of this defense and the defensive face of the team. But it is hard to project Beal into this role when he isn't even clearly the starter at MLB.

Lastly I'll go with one of the defensive captains and our most established defensive lineman. Brandon Kirksey has the ability to be disruptive in the middle of the defensive line. The senior started 11 games last year and finished with 5.5 tackles for loss. His overall numbers for tackles and sacks will need to improve but Kirksey seems to have matured in the offseason and should be the leader along a young line. I'm certain that he will be a leader on this defense, along with Royston, but I don't know if that will translate into the fan's choice as the face of the defense unless he starts getting into opposing backfields more often and making plays that make him stand out.

I think those are some worth candidates. Someone else may surprise all of us and become the face of the defense. Someone like James Manuel, either of the outside linebackers (Keanon Cooper, Mike Rallis) or if one of the defensive ends starts racking up sacks; they could all become the most recognizable defensive player and the face of this side of the ball. But I think the smart money is on one of the names listed above.