Share All sharing options for: Golden Nugz 05.09.11 - The Dalai Lama is a Gopher fan 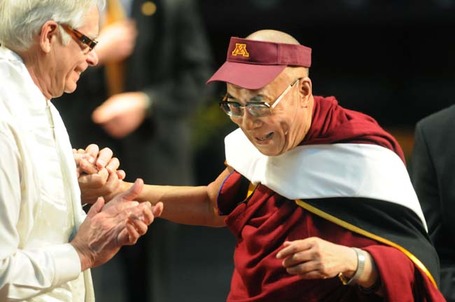 After struggling for much of the season, guess which Big Ten baseball team earned a sweep at Michigan and sits alone in 2nd place in the conference standings? Clearly I'm referring to Minnesota. It really has been a frustrating season where the Gophers lost their home, spent weeks playing games in other states and have then been fairly inconsistent losing to South Dakota State, North Dakota State and St. Thomas. Hardly losses that are becoming of a potential Big Ten Champ.

But the weeks of playing on the road have paid off as the Gophers have won 6 straight Big Ten road games after sweeping Michigan this weekend.

Saturday - This one was an 11-10 win. O'Shea hit another HR hitting 4/5 on the day and scoring 3 runs. Phil Isakkson was the starter and got the win despite the Gopher bullpen giving up 6 runs in the bottom of the ninth turning an 11-4 game to a nail-biter but still a Gopher win.

Sunday - starter Austin Lubinsky didn't give up an earned run and the Gophers cruised to a 6-2 victory. O'Shea hit his third homer in as many days (and was hit by a pitch!), if he isn't the Big Ten Player of the Week then I will raise a big stink.

Great sweep. Great series for Nick O'Shea who hit 7/11, 3 HR, 6 RBIs in three games. We have Penn State up next on the road and then a home series with Ohio State to end the Big Ten regular season.