Minnesota Basketball Student Section is the Best in the Big Ten!

Share All sharing options for: Minnesota Basketball Student Section is the Best in the Big Ten! 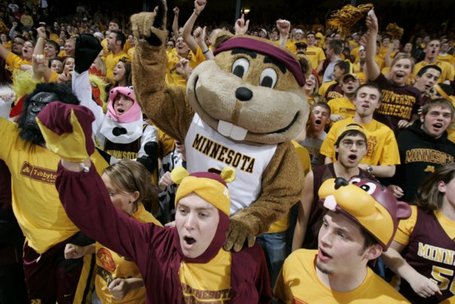 According to Corey Schmidt at Halcyon Hoops, the Williams Arena student section has the greatest impact on opponents in the Big Ten.

A blogger said it is true, so I tend to just believe it is true. But if you care to know the details of why we are the best, it goes a little something like this. 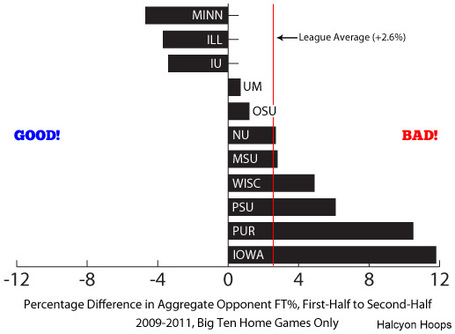 Schmidt decided to look at visiting team free throw percentages at each of the Big Ten venues. Why? Because all programs wisely place their student sections near or likely behind the basket opponents are shooting in the second half. Interestingly enough overall free throw percentages go up in the 2nd halves of Big Ten games. But not in Minnesota! Visiting percentages are down 4.7%. And the conclusion is, the Minnesota student section is greater than the rest of the Big Tens'.

Historically I cringe when people determine the "toughest places to play" in the conference because it is almost always based exclusively on opponent win %. But the fallacy in this is that good teams tend to win at home. For instance the Kohl Center may actually not be any more difficult of a venue to play for opponents than Carver-Hawkeye Arena. But teams lose in Madison a lot more because the Badgers are always good. I'm not saying the Kohl Center isn't a difficult venue and the Badgers do have a home win % that is very impressive against not just mediocre teams but even very good teams. But I appreciate this little study that attempts to use something other than just winning on your home floor to help determine who has a home court advantage.