An Early Look at Gopher Baseball 2012

Share All sharing options for: An Early Look at Gopher Baseball 2012

The 2011 Gopher baseball team had a rocky road to hoe, one that began long before their season ever got started. The collapse of the Metrodome roof from an epic blizzard derailed the promising season starting in December. This meant there were significant challenges to practicing and scheduling games for the Big Ten pre-season favorites. The team spent the first 2 months of the season, 16 games, on the road. And even when traveling to California the weather was uncooperative as games in Sacramento and Santa Clara were also canceled along the way.

The end result was a disappointing 3rd place finish in the Big Ten and an overall record of 25-24. This was a team with some experienced hitters and a very veteran pitching staff. The makings were there for another Big Ten Championship and another shot at making Super Regional. But things didn't work out in 2011 and the team recently took few blows to the make up of the 2012 roster, which also was showing some promise. The team's top three hitters, all underclassmen, were drafted and signed major league contracts. Add to that the fact the Big Ten's all-time leader in saves is graduating along with a few other very good, senior pitchers. A lot was lost this year. 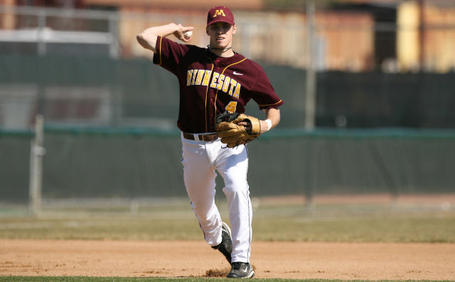 So let's take a look at what the 2012 roster will likely resemble.

1B -Dan Olinger - Anchored by O'Shea for the past couple seasons, this is a key position to be filled. I'm taking a guess that the answer will be Olinger moving from DH to 1B. The to-be-sophomore hit .265 and is the team's leading returning hitter, primarily in the DH as a redshirt freshman.

2B - Matt Puhl (.252) - Puhl started 48 out of the 49 games this year and he will be a lock at second. As a freshman he started 54 games and hit .335, the Gophers will need his stats to be closer to his freshman season than his sophomore numbers. It is conceivable that Puhl will move over to SS to fill the shoes of Petterson.

3B - Kyle Geason (.243, 1 HR) - PICTURED ABOVE, the senior has also been an infield fixture for John Anderson's Gophers. The Gophers have played 170 games in the last three seasons and Geason has started every single one of those games. He has only hit .229, .278 and .243 over those three seasons but that kind of stamina and experience is invaluable. He will be a key to the success of the 2012 squad.

SS - ?? (.XXX) -Who will play SS next year? Excellent question. It is possible that Troy Larson will move back to SS from the OF, though that is unlikely. It is possible that Matt Puhl will move from 2B over to SS, this seems more likely but then you have a hole at second. The fact is an unknown will be playing in the middle of the infield (I'm sure the staff has a good idea but it is unknown to the rest of us). Mu completely uneducated guess is that Puhl moves to short and rFR Kyle Crocker is given the chance to be the regular second baseman.

OF - Troy Larson (.250) - Larson came into the program as a SS and moved to outfield last year because SS was anchored by Petterson and because Gominsky went down in the first weekend of the year to a knee injury. Larson started 57 games as a freshman and saw that reduced to 29 this year with the return of Gominsky. Moving him back to short might be a stretch, as he may also be our everyday centerfielder.

OF - Andy Henkemeyer (.242) - Started 36 games as a freshman and 35 this year as a sophomore, he is one of the few returning regular starters. As the Gophers battled in the Big Ten Tournament, Henkemeyer was batting second in the order. His bat will be heavily relied upon next year.

OF - Trip Schultz (.220) - Schultz will likely start in the OF this year, just not sure exactly where. He is also the only left-handed hitter in the current lineup. Larson will probably be the regular CF, but if he does happen to move to short then Schultz is more than just capable of handling it.

C - Kurt Schlangen (.213) - The soon-to-be junior from Albany was a solid replacement for Kyle Knudson who had been a long-time regular backstop for the Gophs. Schlangen will be the starting catcher next year.

DH - Sam Ryan (.214) - The Junio was getting plenty of playing time early in the 2010 season before injuring his shoulder after just 13 games. Ryan participated in 17 games this year and may be either the regular DH or a primary option off the bench next year in the outfield. 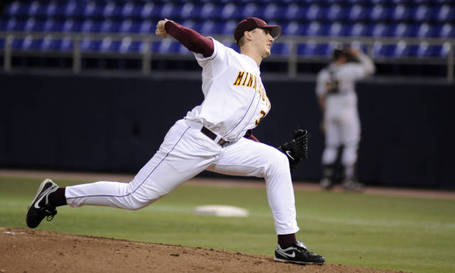 Pitching - The good news is that we are returning two of our three weekend starters including our #1. The bad news is that we lose the Big Ten's all-time leader in saves, Scott Matyas; our #2 starter in Phil Isaksson; and two valuable bullpen guys who also occasionally started in Cullen Sexton and Luke Rasumussen. Overall 33% of the Gopher innings have graduated.

SP - T.J. Oakes (5-5, 3.26 ERA) - The pitching coach's son quickly became the Gopher's ace this year. Oakes was drafted and I don't know that it has been official whether or not he will return to the Gophers but considering he was a 41st round pick, my assumption is that he will return for another year to improve his draft status. Oakes led the staff in innings pitched with 85.2.

SP - Austin Lubinsky (5-6, 4.36 ERA) - Assuming Lubinsky doesn't sign an MLB contract, he will be in our weekend rotation. The stats do not show a dominant year but he was drafted in the 36th round of last week's draft. His return will be an important one for the success of the 2012 Gophers. Lubinsky led the team in strikeouts fanning 53 batters in 74.3 innings pitched.

SP - Tom Windle (6-2, 1.52 ERA) - Left-handed sophomore who had a very good freshman season, mostly out of the bullpen. Windle threw 41.3 innings which was tops for non-starters and he struck out 35 opponents for a good rate of .847 K/inning. Opponents hit just .227 against Windle, expect him to be one of the best Sunday starters in the Big Ten next year.

Bullpen - Billy Soule (3-2, 3.55 ERA) -Soule was second to Windle in bullpen innings pitched and he was very reliable.

Bullpen - D.J. Snelton (1-3, 5.22 ERA) -the left-handed freshman came on to pitch 29.1 innings this year and was a valued member of the bullpen. His role should dramatically increase next year with the loss of a couple key bullpen guys.

Bullpen - Alex Tukey - threw just 12 innings this past year but those are the most returning innings of players not already mentioned.

Bullpen -Dustin Klabunde - has pitched in 24 games over his Gopher career. As a freshman he appeared in 19 and even made 9 starts. Now as a senior I would expect that he'll be asked to step up and give more innings out of the bullpen.

The two biggest questions facing the Gophers next year will be who steps up in the bullpen and which guys step up offensively to replace the hitters who left for the minors. Overall I think the Gophers are looking at another solid starting pitching staff and a solid defensive lineup. The outfield should be very fast that covers a lot of ground.

More significant question marks than we had a year ago but maybe this team will have a home and will get cooperation from mother nature so they can concentrate on baseball next year. This program is one of the most underrated local sports products in the market. They are always competitive and a lot of fun to watch. First pitch is months away but I am looking forward to Gopher Baseball 2012.