Who is Excited for Gopher Football?

Share All sharing options for: Who is Excited for Gopher Football? 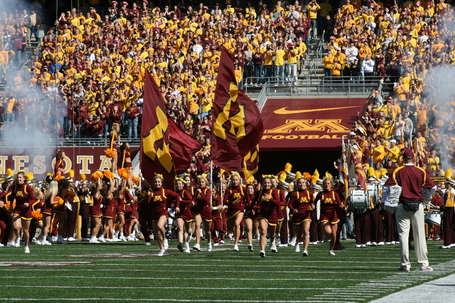 I know we are still months away but I am excited for Gopher Football!

As a lifelong Gopher fan I realize that there are MANY reasons to at best be cautiously optimistic about this season. And most have written off this season as the one step back before we can take two steps forward season. But I'm not talking just about end results. I am just plain excited to watch Gopher football this year, and here is why...

These guys have shown, more than once, that they know how to turn a downtrodden program into a winner and they do it "the right way". These guys are true coaches who know the way to win is with hard work. Based on my highly unscientific observations I feel like much of the previous coaching staff were great cheerleaders for their players and very motivated recruiters. The Mason staff was a teaching staff that didn't seem to work terribly hard at recruiting. The Brewster staff gave recruiting everything they had but didn't make their players better. The current staff is a bunch of "football guys" who know how to teach players and make them better. On top of that they seem to be working very hard at recruiting.

I know you aren't going to turn into a winner in the Big Ten with smoke and mirrors and these things take time, but I'm excited to watch the progression. I am looking forward to a more disciplined team that reduces penalties, does the little things like blocking downfield and is more sound defensively.

Gray is dynamic as an individual and a player. I have my reservations about Gray as a passing quarterback, but I am very excited to see him grow as a passer while making plays on the field. He has been given the keys to an offense that best suits his skill set. I really do not know what to expect from 'Q' but I'm excited to watch. As long as he limits turnovers, he should be fan favorite and something to hang our hats on going into 2012.

Yes, I know we gave up 33 points per game last year and finished last in rushing yards allowed. But last year's defense was young and we return most of that unit. The linebackers should be better considering they return everyone while adding Brendan Beal. The secondary lost only Ryan Collado and Kyle Theret while giving guys like Troy Stoudermire, Brock Vereen, Michael Carter, Kenny Watkins, James Manuel and others some valuable experience. Along the line we will be anchored by Brandon Kirksey and then I desperately hope that one or two guys will step up to be solid. Among Ra'Shede Hageman, Anthony Jacobs, Kendal Gregory-McGhee, Matt Garin and D.L. Wilhite somebody should have the opportunity to step up and make this line better than it was a year ago.

I believe that at nearly every position we should be at least slightly better just due to a year of strength and maturity. But more than that I fully expect to see a defense that is more fundamentally sound and one that is more often in the right place to make a play. This isn't going to be the best unit in the Big Ten but I expect they'll be improved and I'm looking forward to watching Beal and Stoudermire in particular. 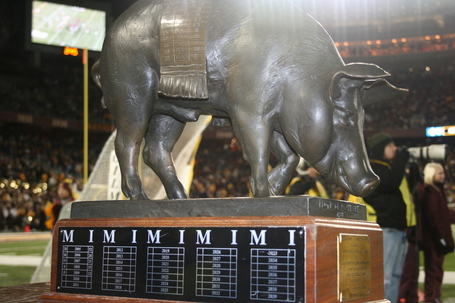 Is young but this is a group of mostly local kids who are going to be very good. This year may be a learning year but I look forward to watching them and seeing them grow. In particular I'm looking forward to seeing Ed Olson, Tommy Olson and Jimmy Gjere get a lot of reps this fall.

5 - We Have a Winning Streak

Last year was nearly unbearable but people quickly forget that this team has a 2-game win streak. And we have Floyd in our trophy case. There is a new coaching staff with new systems (again) but I think this team will be more competitive than most are predicting.