Now that we have played the four non-conference games we get an opportunity to win The Jug for the first time since 2008. This game will be a battle of teams breaking in new coaching staffs. A battle of teams with athletic and dynamic quarterbacks. And a battle of teams who struggled mightily to stop slow down an opponent last season.

This game, in my opinion, is the one that will determine the success of the season. Last year w

as an awful year but beating Iowa saved the season in a sense. This game isn't a save the season type win like that. But this game could be a huge momentum builder and if the Gophers want to make a run at a bowl game, this is one they'll almost need to win. Most Gopher fans assume that we will come into this game with a record of 3-1. To be bowl eligible we will need to find three more wins in the Big Ten schedule. And the hard part is that our home schedule is difficult. This is a game that might be winable and would be a nice notch in the belt for Coach Kill to win a valued rivalry trophy in just his first season. Michigan is vulnerable, but are we going to be ready to take advantage of it?

I don't think this is a must-win or crucial game, but this is a swing-state game (if you will). It could open the door to a more successful season than most anticipated.

As you can see Michigan had a potent offense last year that was "complimented" by a disastrous defense that was even worse than Minnesota's in most measurable categories. The new coaching staff hopes to continue the offense explosiveness (Denard Robinson) and maybe they'll be able to muster some way to slow down a Big Ten opponent. 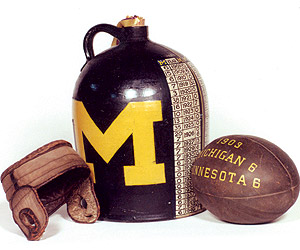 Michigan sprinted to a 5-0 start last year and then eventually hung on to finish 2-5 and make a bowl game which as a 52-14 drubbing at the hands of Mississippi State.

The offense starts and stops with Denard Robinson who led the team in rushing and passing, and then was named the Big Ten's Offensive Player of the Year. At one point during the 2010 season he was considered one of the favorites, or at least in the conversation, for a Heisman Trophy. What will be missing from last year are two starters along the offensive line, but everyone else will be back. This team will rack up a lot of yards and score a lot of points, there is no getting around that. The new staff will look to reduce the amount of carries for Robinson to reduce his potential for injury, but on the other hand this kid is a threat to score on every single play. Containing him will be priority #1 for the Gopher defense.

The defense also returns a lot of starters but the question is if that is a good thing or not. I would expect that the depth chart will be different in October than it was last November. This unit should be better. It is kind of like the 2009 Gopher defense that was SO BAD in 2008 that it was virtually impossible to be that bad two years in a row. Safety, Jordan Kovacs finished second in the Big Ten in tackles last season and he will return. As will Ryan Van Bergen who led Wolverines with 4.0 sacks in 2010. Defensive Tackle, Mike Martin also returns and he earned 2nd Team All-Big Ten honors from the coaches. The secondary has been brutal the past couple of years but the return of Troy Woolfolk and J.T. Floyd along with improved play from young guys like Carvin Johnson give Wolverine fans some optimism to hold on to.

Again, I'm not trying to make any predictions here. Even if I wanted to make a prediction both of these teams have a number of variables still up in the air, it would be hard to gauge how they will look in week one or in week five. These teams have some similarities and it should be an interesting matchup between two teams on the rebound with new coaching staffs. Both quarterbacks could put up some impressive numbers, but which one will lead their team to a win?

For the Gophers this is one of two swing games it is at once a winable game against a team that is potentially a bowl team (Northwestern is the other one if you are wondering). It is very conceivable that we will be 3-1 as we head on the road to Michigan. A win here, and the corresponding 4-1 record, would turn some heads and give this Gopher team some serious confidence heading into the remaining seven Big Ten games. And we'd be just two games shy of that magic number of six wins. My magic eight ball says that I shouldn't hold my breath for a Gopher win here but it is not out of the realm of possibility.