A Look at Some of the Greatest of Gopher Quarterbacks

Share All sharing options for: A Look at Some of the Greatest of Gopher Quarterbacks

We are heading into a new era this fall. We just finished the era of Adam Weber under center and for the first time in four seasons we will get to see someone new leading the Gopher offense. This got me to wanting to take a look at the pantheon of Gopher quarterbacks and try to evaluate just how good some of the best really were. Ultimately this is kind of an exercise that helps put Adam Weber's career into perspective, but this is not an attempt to justify his existence over the last four years. That ship has sailed and it is irrelevant at this point. But it is interesting to take a look historically at the best the University of Minnesota has had to offer at the quarterback position. 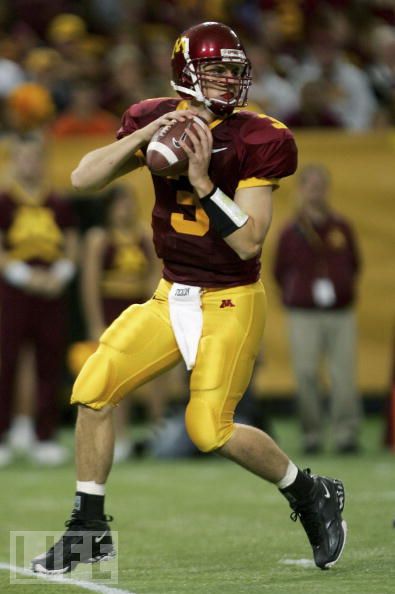 While not technically true, Weber has basically taken every snap for the last four years and holds nearly every passing record in the Gopher books. I began this exercise by taking a look at what is loosely considered to be the top 10 QBs in Gopher history. One could argue that these are not the true top 10 but based on playing the majority of snaps (most of them for at least 3 seasons) and racking up some impressive passing numbers (many of them throwing for at least 5,000 yards with over 800 attempts) these were the guys I went with. Truth be told I simply utilized the GopherSports.com list of All-Time Top 10 Passers which is obviously based on passing yards. While passing yardage isn't the only stat that will be or should be looked at but I think it is a fair indicator of QBs who's valued lied somewhat on their ability to move the ball through the air as well as lead an offense. So here is who I went with (in order of most recently played)...

The incredibly interesting numbers and brilliant analysis below the jump...

I'll first give you a quick table with career numbers.

As most of you know, or can see above, Adam Weber is the Gopher career leader in Attempts, completions, completion %, yards, yards per game and touchdown passes as well. He also ranks among the career leaders in the Big Ten in yards as well. But I wanted to look deeper at the stats. It is really easy to say well he has so many more attempts so it's no wonder he has more yards, TDs, etc. And he had the luxury of having the Gopher's best all-time WR at his disposal and all he did was throw it up to Decker who made Weber look better than he is. Or let's not forget that Weber is also the Gopher's all-time leader in interceptions. All of that is true, but let's look a little deeper by taking out attempts as a primary factor in racking up stats.

Starting with interceptions let's try and put the career totals into perspective. How does this list look when we factor in interceptions per attempt?

This is a pretty interesting list that kind of has a natural break after the top five. But the number that jumps out here is Bryan Cupito's 2.7%. I used to rail on Cupito, much like many of you did on Weber, about his inconsistent passing wondering how hard can it be to get a Big Ten quarterback to hit an open receiver, 3 yards downfield, on the run (Cupito probably explains why I was never as harsh on Weber). But his ability to not throw interceptions while having the 3rd highest attempt total is really impressive. Anything under 4% is a good number and just for reference sake here are the numbers for a couple of our Big Ten neighbors who just graduated a couple of memorable QBs, Ricky Stanzi finished his career at 3.3% and Scott Tolzien was 3.0%. 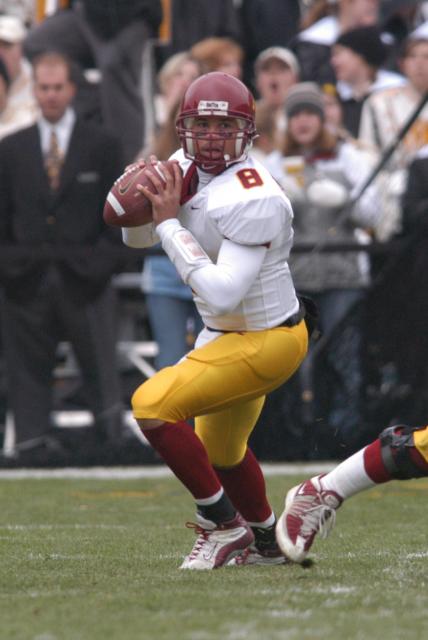 This list kind of drives home a pretty important point. The guys who had strong running backs had much lower interception rates and more significantly higher touchdown rates. We all know that Adam Weber never had a semblance of a running game to help his offenses. Abdul-Khaliq, Cupito and Foggie had the luxury of guys like Maroney, Barber III and Darrell Thompson (perhaps you've heard of them?). Perhaps there really is something to having a ground game to set up the passing game. "Pounding the Rock" was clearly missing during the Brewster administration and certainly not the fault of the quarterback.

Next is completion percentage which doesn't take any manipulation of the data. Here is where I'll defend Weber a bit more. Most of Weber's critics will tell you that they are tired of passes at the feet of receivers or on their backside not leading them in stride. And we did see that but I'll argue that over a four year career including a freshman season being thrown to the wolves, being the program's all-time leader in completion % does not happen by accident. 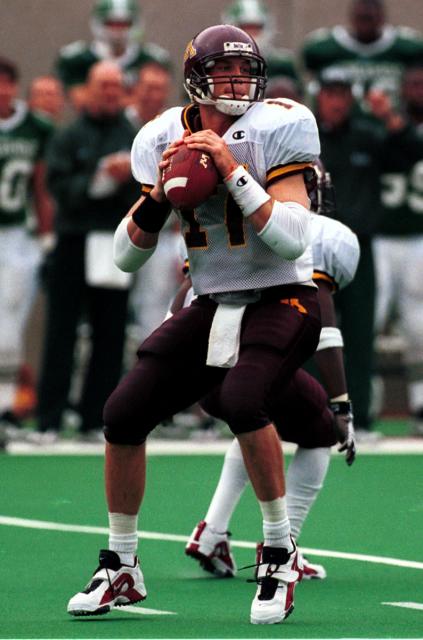 Maybe Sauter, AAK and Cupito's completions were all better completions than Webers but I think that is a stretch. I'll also argue that at the college level imperfect passes are just plain a reality. As I stated above, I had the same reactions to watching Bryan Cupito during Mason's final seasons. That is when I decided to accept college quarterbacks as imperfect beings who are not NFL quarterbacks. But after four seasons, 50 games and over 900 attempts it is hard to argue against completion percentage. I'll move on. Overall 57% is not an outstanding number and Weber leading the Gopher's all-time list is more of an indictment on our QB history than it is anything else. Stanzi finished his career with 59.8% completions and Tolzien was an impressive 68.1%. 57% isn't an impressive number, it is just the best we have seen.

Finally I wanted to take a look at QB/WR combinations. I often heard how dependent Weber was on Decker. I want to reiterate that this is not an apologist's take on Adam Weber, it was part of the debate over the last few years and I thought it was worth taking a look at. I did find it interesting that many of the other best Gopher QBs also had a favorite receiver that received a heavy dose passes.

QB to WR combos over a two year span...

The numbers bear out that most of the QB's listed above had a very good receiver or two and most of them actually threw to their "favorite target" at a higher rate than Adam Weber threw to his roommate. I should acknowledge that these numbers may not be complete. I know that Decker missed some games, most of them coming during his SR season (Weber's JR season) but I'm not going back to see if or how many games were missed by any of the other receivers mentioned. 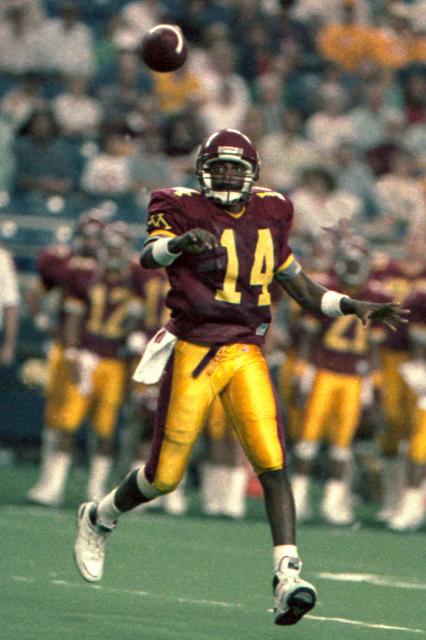 Now if we are going to move the conversation into who is the greatest Gopher QB of all time then we have to start looking at wins. This is where the list gets pretty ugly because nobody won at a truly impressive rate. (NOTE: I did not go season by season to see exactly who started every game. Example 1: Abdul-Khaliq attempted 95 passes as a freshman but I do not know which games he started and am not including any wins/losses he may have earned that year. Example 2: If a QB was the primary guy for the entire season but missed a game or two due to injury I did not factor those out. THIS LIST IS A GUIDE, NOT EXACT because I am too lazy at this point!)

Straight win% is certainly important when discussing your great QBs. It is sad that so many of our productive QBs had such poor W/L records. Being the guy under center has it's advantages and it's disadvantages. You are often the guy who gets put up in front of the media after a game regardless of the outcome and regardless of fault. As mentioned, Abdul-Khaliq had the luxury of some great running backs and he was a pretty good threat on the ground as well. Billy Cockerham was the starter for 2 years, his first was Mason's second year where the Gophers got to 5-6 and then his second was the 1999 season that was arguably the best Gopher team we have seen since the 70s (that year we won at Penn State, nearly beat Big Ten champ Wisconsin and finished 5-3 in the league).

Guys like Weber and Sauter were saddled with two of the worst coaches in memory. While they obviously existed together I don't think it is totally fair to marry Tim Brewster and Adam Weber together (same for Sauter/Wacker, Fleetwood/Gutekunst). Yes they basically led the Gophers over the same four-year span, but many of the decisions made by Tim Brewster that negatively affected the entire Gopher team should not be on Adam Weber's shoulders. Changing coodinators yearly and producing some awful defenses did very little to help his team's chances of winning. Certainly Weber lost games for us as well so he isn't off the hook (Florida Atlantic-07, Northwestern-07 and 08 come to mind very quickly), but this is why you have to look at win % with a grain of salt and consider coaching, defense, offensive lines, etc.

Lastly it is fun to look back at this list of Gopher QBs and then let your minds drift forward. Many of us are anxiously awaiting the debut of MarQueis Gray as the undisputed Gopher starter and let's give him two full seasons to see where he stacks up on this list. In my humble opinion, the single biggest mistake Tim Brewster made in his tenure was not redshirting Gray in 2009. How exciting would it be to see Gray with three years of eligibility as the starting QB. But we will let his career play out and then may be we can revisit this post in a couple years.

Looking at the 10 names discussed above, how would you rank your top 3 or 5 Gopher QBs of all time?