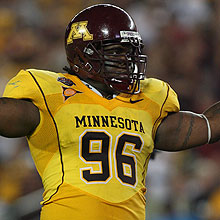 The outside of the defensive line was discussed and that means up next is the interior of the line. I believe that this will be a position of strength with no reliable depth.

The 2010 tandem of Jewhan Edwards and Brandon Kirksey (pictured right) was solid but not spectacular. They combined for 57 tackles, 16.5 TFLs and 3 sacks. Not too bad for the first-time starters in their junior seasons, but it is not like they earned any post-season awards or strike fear in to Big Ten defensive coordinators this fall. More was expected of this tandem returning in 2011 but Mr. Edwards was one of the few casualties of the coaching change and he transferred out of the program.

So that leaves us with one returning starter and little experience behind them coming into the 2011 season. Help is coming from other positions to make this unit stronger. Reports out of camp are that a couple of former ends, Anthony Jacobs and Ra'Shede Hageman, will be moving to the inside which should bolster this unit. But the question is will this mini-unit be an upgrade over last year or not?

Brandon Kirksey is going to be one of the anchors along the defensive line. Kirksey is a three year letter winner and has appeared in 33 games starting 11 and was a junior captain last year. The Missouri native chose Minnesota over reported offers from LSU, Arkansas, Kansas State and Mississippi. Since coming to Minnesota he has added about 50 pounds and has accumulated 52 tackles, 10.5 TFLs but no sacks! That needs to change and is going to change this year. So Kirksey started last year, will be starting this year and after a brief moment of getting suspended last year he should be mentally ready to be an upgrade over himself.

Starting next to Kirksey will be Anthony Jacobs. The Minnesota native was actually a Glen Mason recruit and was maybe Mason's only four-star rated recruit. He redshirted his freshman season and since then has played in 35 games, started 14 (at defensive end) and has accumulated a total of 67 tackles, 11.5 TFLs and 4.5 sacks. Statistically his production was very similar to Jewhan's. Jacobs usually started at end and would play a lot of snaps inside as part of the rotation and he started at tackle when Kirksey was suspended for a game. These two are not exactly Ndamukong Suh and Jared Crick, but they will be two reliable guys on the inside who will eat up blockers, make a lot of tackles and HOPEFULLY get into the offensive backfield a little bit and make some noise.

Ra'Shede Hageman is expected to be in the regular rotation inside. The sophomore got a lot of hype last season and never lived up to Brewster's hype machine. I discussed this in the DE preview, but it looks like Hageman has been moved inside with the exception of short-yardage situations (I'm making an assumption here). He is young and getting a lot of snaps this year should prepare him to start next year. He is very athletic for a guy his size, with proper development he really could be very good.

Those three figure to get the vast majority of snaps. Also backing them up will be redshirt freshman and sophomore, Harold Legania is already a big 290+ as a freshman. He will need to tone up and get some reps this year which will help him immensely, for next year. Eric Jacques has switched positions what feels like a few times and is settling it at DT this year. Like Legania, getting some reps this year will be beneficial as he'll be counted on more heavily next season. If I had to pick one who will see more time this year, my money would be on Jacques but I'm not expecting much out of the sophomore this year. Austin Hahn appeared in seven games and started one last year before injuring his knee and missing the rest. The walk-on from Wisconsin has experience and may see the field some but likely not too much.

So now the million dollar question...is this group going to be better than it was a year ago? Hard to say. We are basically comparing Edwards-Kirksey-Jacobs to Kirksey-Jacobs-Hageman. My assumption is that the returners have improved, even if it is just a little. Slight upgrade? Maybe. I know that defensive tackles have more responsibilities than getting into the offensive backfield. At times if they can force a double-team that will free up linebackers to get to the rusher for short to no gains. But the good ones also get into the offensive backfield for tackles for losses and pressure on the QB. This unit needs to spend more time in the backfield than it did last year.

Much like some of the other positions I am expecting that just a little coaching + a year of experience will equate to a slight upgrade. I am tempted to vote neutral, but it is the preseason when everything is going to be better than it was a year ago.