The Iowa Corn Growers Association unveiled the new and improved Cy Hawk Trophy. I'd like to just tell you how much it sucks and whoever was the project manager on the redesign of the Cy Hawk Trophy project should be fired, but I'll just let you decide for yourself. 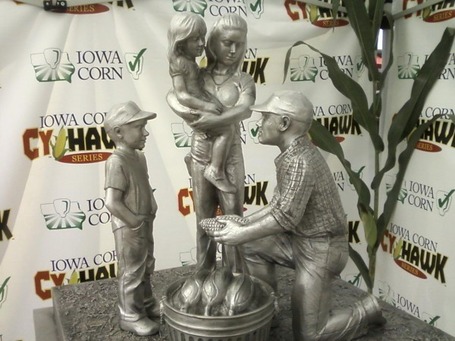 Now, I grew up in rural Minnesota where corn and soybean farming was what drove the local economies. So I can appreciate the family values sentiment of the trophy.

"This is literally a work of art representing the people and characteristics that are uniquely Iowan." said Craig Floss, CEO for Iowa Corn. "Just as the trophy reads, we are honest, hard working, family and community orientated people. Iowa’s corn farmers are proud to bring this work of art to the new Iowa Corn Cy-Hawk Series football game and we look forward to sharing it with the people of Iowa."

But this is a FREAKING FOOTBALL TROPHY. This is not intended to be a prize at a Norman Rockwell painting contest. This is awful and embarrassing for college football. This should not go in the trophy case, it belongs next to the school's collection of Precious Moments figurines.

I don't need to comment on the new Cy-Hawk Trophy anymore, plenty of others have that covered...

Come on…do we get a do over? Can we hit the reset button?

The Land Grant Trophy called and all it could do was laugh.

I would say that this is the inherent danger of letting a local agriculture lobby have free reign to brand a football game -- the whole "look at how wonderful and wholesome we are" schtick -- but that's hardly an industry-wide problem.

From a certain aesthetic sense, the new trophy is a step up from the previous version: it no longer looks like something a badly hungover shop teacher cobbled together in fifteen minutes. Unfortunately, it also now looks like something that belongs at one of the arts and crafts booths at the Iowa State Fair.

But this got me thinking about what is the worst rivalry trophy in all of college football.

Land Grant Trophy - Michigan State vs. Penn State - This thing is a monstrosity and it is amazing that a player isn't injured during the elation and celebration following a game between these two bitter rivals teams in the same conference.

And thus the Rivalry in Name Only was born. Since there was no logical reason for a rivalry to exist between the two schools, they had to make one up. The best they could come up with was the fact that Penn State and Michigan State were the original land grant universities. Then, to make it really official, they made up a trophy and gave it the original name, are you ready for this? The Land Grant Trophy.

Telephone Trophy - Iowa State vs. Missouri - I didn't even know this one existed until researching for this post, but it is ugly. Iowa State gets on the list again as they get to battle for a telephone against Missouri.

The Iron Skillet - TCU vs. SMU - Let's call a spade a spade, they are playing for a frying pan.