Hats Off to D.L. Wilhite for Truly Being a Student Athlete

Share All sharing options for: Hats Off to D.L. Wilhite for Truly Being a Student Athlete 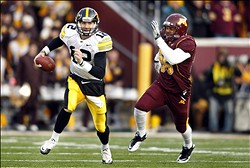 I love stories like this because they never get reported. It feels like for every 1 FBS level football player who goes to class, learns something, gets a degree and happens to be a productive football player there are 10 who don't got to class, sell jerseys for tats, take buckets of cash, etc. In reality it is probably the other way around but the bad eggs are the ones that get all of the headlines.

Well, it is time to give a pat on the back to D.L. Wilhite who spent his summer preparing for the upcoming football season where he projects to start at defensive end. As football fans we are looking at Wilhite to step up his level of productivity and help this defense improve, particularly at getting pressure on opposing quarterbacks. But this isn't about D.L. the football player. The junior end also spent much of his summer preparing a research project that he presented at the TRIO Ronald E. McNair Scholars Program.

"It was an honor to be selected for such a prestigious program like the McNair Scholars Program," Wilhite said. "It has been a very challenging summer working on my research project. But it has been extremely rewarding in my growth as a scholar. Hopefully this will help open more doors for me in the future."

Wilhite clearly has an eye to live after football. Some athletes take the educational opportunity given to them because they are talented athletes for granted and some take it seriously.

"My dream is to receive a Ph.D. in History," Wilhite said. "I want to become a professor and bring new perspectives on African and Middle Eastern societies to students."

Hats off to Mr. Wilhite. I hope that after a couple more years of sacking Big Ten quarterbacks we will see him on the University's faculty and coaching the next generation of defensive ends on TCF Bank Stadium sidelines.