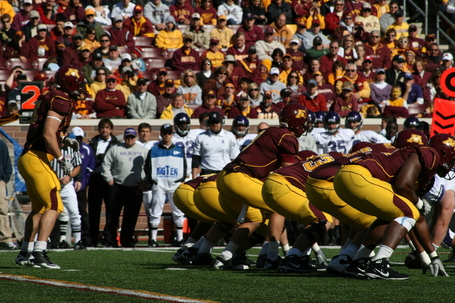 This preview is much easier to do now that the depth chart has been released. But even knowing the names, it may still be difficult to ascertain whether or not this unit will be an upgrade or a downgrade.

This unit is going to be a mystery and we may learn more from this unit after Saturday's game than any other unit on the field, with quarterback maybe the biggest exception. The good news is that we are returning the left side of last year's staring offensive line. Ed Olson started as a true freshman at LT and Chris Bunders has made 28 career starts at guard for the Gophers. The rest of the line is going to be new...kind of. Gone is big right tackle Jeff Wills , right guard Matt Carufel and center D.J. Burris. Those three actually had pretty good seasons last year, at least they improved from 2009 to 2010. Wills in particular made significant improvements from this JR to SR season and was a decent tackle. Carufel was healthier and performed better and Burris was adequate at center. Overall the offensive line was not a particular strength of the offense but it was better than the 2009 version. I'm not sure that means it will be better in 2011.

Replacing those three lost starters will be redshirt freshman Jimmy Gjere at right tackle, Ryan Orton at guard and Ryan W\ynn at center. Combined they have 24 starts among them so replacing three new starters with two guys who have plenty of starting experience makes this transition a lot less concerning.

Let's take a look at the all-Minnesota starting offensive line for 2011.

RT - Jimmy Gjere was one of the headliners of the 2010 recruiting class. The four-star kid from Irondale came into the program at 6-7, 275. After a year of redshirting he is now listed at 315 lbs and will be your starting RT as a freshman. As a freshman, starting at a key offensive line position one has to assume there will be some growing pains. While that may be the case I also think most Gopher fans believe we have a RT locked in for the next four years. I am excited to see him play this year, especially week one at USC where he'll get a great challenge in his first career start.

Behind Gjere is another redshirt freshman, Sean Ferguson who was in competition with Gjere for a while and ended fall camp with himself and freshman, Foster Bush as the dreaded "OR" for the backup job.

RG - Ryan Orton has made 10 career starts over his three years in a Gopher uniform. Eden Prairie native who has played at different spots along the line and should be the locked in starter at RG for all 13 games this season. As mentioned it is comforting to have a SR who has made quite a few starts stepping in to replace Carufel. I'm not expecting an award winning season from Orton but he should be solid.

Behind Orton is redshirt freshman, Zach Epping. The Kenosha, WI kid looks to throw a wrench into the all-Minnesota starting OL for next year. Not that there's anything wrong with that.

C - Ryan Wynn started 13 games as a freshman back in 2008, missed 2009 with a back injury and was a regular along the line last year making one start. A Plymouth kid who played his high school ball at Maple Grove, and a senior with plenty of starting experience. I wouldn't expect you will see any real drop off from last year's starting center with Wynn.

Sophomore, Zach Mottla will be backing up Wynn and may be starting early this year if Wynn's injuries issues don't get healed up. Much has been made of fumbled snaps between Mottla and Gray so let's hope and pray that those are cleared up if Mottla gets to see the field.

LG - Chris Bunders is Maple Grove kid who played his ball at Osseo and has made 28 career starts for the Gophers including every game over the past 2 seasons. Bunders has been durable, reliable and really kind of an under-appreciated Gopher. All 28 starts have been at guard and there is every reason to believe that he will be at a minimum reliable and possibly very good this season.

Next year's starter at LG and possibly this year's back-up will be Tommy Olson, the younger brother of Ed. We will see the Olson brothers manning the left side of the Gopher OL for the next couple seasons it is just a matter of time.

Finally we get to Ed Olson. Last year's opening game starter at LT as a redshirt freshman is back as the starter protecting Gray's backside. He started eight games last year at LT, missing some largely due to injuries. He has the size and the skill set to be a dominant tackle in the Big Ten. He may not win any awards this year but they are in his future and he will be our starting LT through 2013.

Behind Olson will be Marek Lenkiewicz, a redshirt freshman from Tinley Park, IL. Don't expect him to play much this year but he will be interesting to watch should he be thrust into action because of injury. One of the MANY young offensive linemen on this team.

Eight of the 11 players listed on the official Gopher two-deep are freshmen or sophomores. This unit should be OK this season but there are plenty of options available and some very talented kids in the pipeline to return the Gopher OL to one of the best in the Big Ten. Will it be this year? Probably not but I believe it will be as good as it was last year, mostly due to coaching and scheming. Hard for me to vote upgrade, but I do not believe it will be a downgrade.