Share All sharing options for: Gophers Take Care of Business, Beat Miami (Ohio) for First Win of the Season 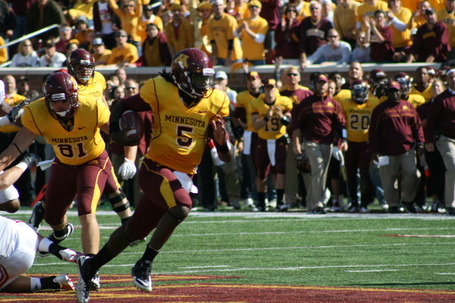 The good news is that Gopher fans were witness to an entertaining and close football game that resulted in a Gopher win. The bad news is that we were witness to two evenly matched teams in terms of overall talent. But for now, let us focus on Jerry Kill's first win coaching the Golden Gophers. For the first time this year the Gophers played consistent football for four quarters. It wasn't great football but it was consistent and we did a number of things well, and finally it was enough to win.

What went well? MarQueis Gray, MarQueis Gray and MarQueis Gray. The Gopher quarterback had a career day rushing for 171 yards, completing 11 of 21 passes for 163 yards and a TD. Gray was greater than anyone else on the field, the remaining 43 players were all pretty equal. There is no understating the effect that Gray had on this game, he was the Gopher offense and Miami (Ohio) was unable to come up with an answer for his legs.

"You can see him gaining confidence. There is a lot he still needs to learn. We can’t run him 25 times a game, and we have to be careful with that. It is a building year and people will need to be patient."

Remember that this was just Gray's third start since his senior year of high school back in 2007. Gray is learning to be a quarterback, today his athleticism was more than enough as he dominated.

What else went well? We may have found a #1 running back. I am sure that Duane Bennett will be the starting running back next week and beyond, BUT today Donnell Kirkwood ran the ball like he wants to be the #1 back. The young man from Florida ran for 57 yards on 12 carries and was running over Redhawks throughout the second half. His speed won't wow you but he runs hard and falls forward for extra yards.

The pass rush was much better. We recorded just one sack when Michael Amaefula blew by the Miami RT to bring down Dysert. In the second half we were often in Dysert's face nearly bringing him down, which was good to see. But unfortunately every time we got good pressure, Dysert seemed to make big plays out of broken ones. That still has to get better but at least we were getting some pressure today.

What didn't go well? There are a number of warts on this team that continued to reveal themselves. The pass defense is bad and we allowed Zac Dysert to throw for 325 yards and 2 TDs completing 27/47. Nick Harwell lead Miami (Ohio) in receiving with 162 yards on 12 catches! We gave up a lot of yards and receivers were often open. With that stated, we also knocked down a number of passes indicating that our pass defense was at least occasionally in position to make plays. Brock Vereen had two very nice pass breakups in the first quarter, Mike Rallis got his hands on two passes in the second half and of course Kim Royston's support over the top ended the game with a pass knock down in the end zone.

But this game was a W. This Gopher team was completely different than the one we saw last week. We were not a great team today but we were better and we were consistent. This is exactly the team I was expecting to see at the beginning of the season. Not a complete team, but one capable of making some plays on both sides of the ball. Today we made enough plays to win. To win games in the Big Ten we'll still have to be better, but today it was enough to beat a good MAC team. Eventually the bar needs to be raised, but today we will take the win and be happy about it.