The Rebuilding Process...How Long Will it Take?

Share All sharing options for: The Rebuilding Process...How Long Will it Take? 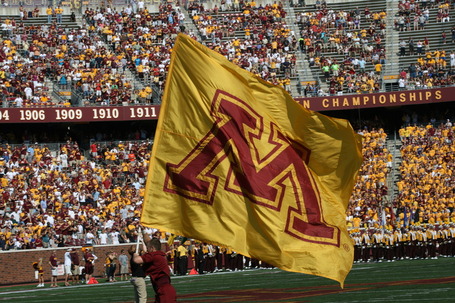 This has been a very up and down year for Gopher fans, and we are only four games into the season. As per usual there was incredible optimism for a better year, a more competitive team and a more disciplined team in 2011. The USC game was a loss that was surprisingly close and pushed the expectations for Gopher Football higher than the probably should have been. The following game saw those expectations come crashing down with a loss to one of the worst teams in NCAA football. The hope for immediate improvement quickly vanished and the citizens of Gopher Nation are not happy.

But Reverend Kill has been preaching that this is a process. He has been through rebuilding before, he knows what it takes, we clearly are not there yet and we cannot expect Rome to be built in a day. At this point we have no reason to question this logic. We are not very good and have not been for quite some time. And he actually has a track record of turning around awful programs. Eventually there has to be some results on the field before the "trust the process" routine wears thin, but we are nowhere near that point yet.

So the question worth pursuing is what will the rebuilding process look like and how long can we expect it to take? Then the real question, the one that trumps all others, is will Gopher fans and the University's athletic department big shots have the patience to see it through?

Fortunately Jerry Kill has been through this at his previous two stops. In 2001 Kill took over a Southern Illinois football program that had been awful. Then in 2008 he took over a weak Northern Illinois team. Both of those fairly recent rebuilding projects should tell us an awful lot about what we can expect here at Minnesota.

The year prior to Jerry Kill's arrival the Salukis finished their season 3-8 which forced a coaching change. Does this look at all familiar? Kill's first year was a struggle as Kill era at SIU got off to a 1-10 start. That in itself is not encouraging, but looking at the subsequent years is. Year one is the painful year of getting the train on the right tracks and then headed in the right direction. In three years Kill took the Saluki program from 1 win, to 4 wins to 10 wins in year three. In this case turning the program around was a three-year process.

At SIU, year two is the year of improvement. Things still aren't rosey, but there is definitely signs of improvement both in statistical measures and in wins.

The big improvement came on the offensive side of the ball while defensively they remained relatively the same. The rushing offense, points scored and 3rd down conversions made incredible improvements. Considering that our rushing game stinks, we struggle to score and we have real troubles converting on 3rd down those are encouraging signs. Let's take a look at year 2 to year 3.

Clearly this was the year where the defense catches up to the improvements made by the offense. Reducing the amount of rushing yards allowed by 43% is incredible and clearly was the impetus behind reducing the points allowed by 36%. Overall there were some dramatic improvements from year 1 to year 3.

From that point on, Kill never finished with fewer than 9 wins and his last year at SIU was a 12 win season where they were one of the final four teams in FCS. Not a bad little turnaround, after enduring a very rough first year and a slightly improved second. Let's move on to Northern Illinois.

Northern wasn't in quite as bad a shape as Southern was when Kill took over the program. They were coming off just a two-win season but the previous staff had experienced some measure of success in recent memory. Year one was a 6 win season, year two was 7 wins and then once again year three was the breakout year with 10 wins.

Statistically this is somewhat similar to what we saw with Kill's first two years at Southern. Offensive rushing improved while the passing game suffered a bit. Ultimately points went up. Defensively we don't see any major improvements, in fact they took a step backwards in pass defense and points allowed.

Year 2 to year three continued to see major improvements on the offensive side of the ball. Defensively they gave up more yards but managed to reduce the amount of points allowed and got teams off the field on 3rd down better. The additional yardage may be attributed to having a fairly high powered offense that gave the ball back often because they scored a whopping 532 points.

What can we learn from all of this? Well it takes a couple years and at both stops nothing impressive happened in year one. Year two was always better but still not anything special. At both of his previous stops year three was the breakthrough year. That was when statistically Kill's teams were more productive and sharper. This translated into a significant jump in wins.

Since we are looking at rebuilding projects I thought I'd look back at Glen Mason. I'm not going to go into as much detail but Mason's first two Gopher teams accumulated 3 wins then 5 wins. Then Mason took the Gophers to 8 wins in year three which was the first win% above .633 since Cal Stoll in 1973 and first time to eight wins since Murray Warmath in 1967 (the eight win mark isn't totally fair considering they moved to a 12 game schedule in 1997, but it is not like we were hitting seven wins consistently).

There are always a host of factors that contribute to turning the program around. Returning/experienced talent is important. Sometimes you need to get a little bit lucky with your schedule. Recruiting at this level may be an adjustment for Kill and staff. And one significant caveat here is that there will likely be a new athletic director in place in the next year. This new A.D. did not hire Jerry Kill and has no reason to stick with him. Basically a lot can happen in three years and each situation is very different. But here is what these three rebuilding processes tell me.

When you do things the right way, when you put a plan in place and stick with it, then you will see results right around the 3rd year. Tim Brewster saw improvements in year two but all of his changes to offensive systems and coordinators doomed his process to failure (though it may never have had a chance anyway). But Kill thrives on continuity. His coordinators will be in place for the next few years. His players will learn what it takes and what is reqruied. They will learn to play consistently. Each successive year his teams will know what their responsibilities better and will be able to execute them without thinking.