Share All sharing options for: Gopher Football 2012 - Projecting the Offense 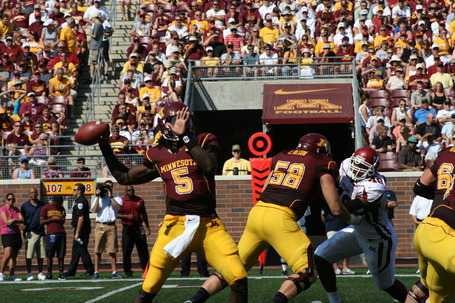 I took a shot at projecting the 2012 Gopher Defense already, so it is only fair that I give the offense the same treatment. I have stated on multiple occasions that looking back at Kill's last few rebuilding projects, the most dramatic improvements have typically come on the offensive side of the ball. I've gone on record stating that offensive yardage should increase by 10-15% and scoring will increase by 25-30%. This is based on year 1 to year 2 improvements at SIU and NIU.

At Southern Kill inherited a team that was talent deficient and offensive production jumped dramatically. Northern had more talent on the roster and the offensive improvements were more modest. Minnesota is returning quite bit offensively, most notably is obviously MarQueis Gray at quarterback. Looking back at Kill's first two years at Northern he started Chandler Harnish in his first season. Harnish finished with over 2,000 yards of offense. In Kill's second season Harnish had fewer yards rushing but he completed 5% more passes, touchdowns went up and interceptions went down. I hope we can expect more of the same for Q but with rushing yards still a key piece of his game.

But the offense will be about more than one person. Let's take a look at who is leaving, who is returning and what new blood is coming into the program...

Players Lost
(in order of significance)

1 - Duane Bennett (RB) - The team's leading rusher who was actually a running back. Bennett finished his Gopher career with over 2,000 yards and was a leader on the team. His production was solid but he wasn't lighting the Big Ten on fire or a guy who could carry the offensive load. His leadership and consistency is what will be most missed.

2 - Da'Jon McKnight (WR) - I think people were expecting more this year out of McKnight but it should be noted that he did have 51 catches and 760 yards both improvements from his JR year. His touchdowns dropped off and other than the Michigan State and New Mexico State games his impact was rarely felt on the field. McKnight is a big receiver, capable of making big plays.

3 - Chris Bunders (OL) - Bunders started the season inside playing guard but when Jimmy Gjere was injured he moved out to RT and had a very good senior season. 40 starts over his Gopher career is impressive and you usually don't easily replace that.

4 - Ryan Wynn (OC) - Started 26 games in his Gopher career including all 12 games at center in 2011. The one position along the OL that worries me most this fall is center.

5 - Collin McGarry (TE) - Started all 12 games at TE and finished the season with 16 catches and 2 touchdowns.

6 - Eric Lair (TE) - Started just four games as a senior and had a disappointing season. As a junior Lair grabbed 39 catches for over 500 yards while starting all 12 games. For his senior year he had just 11 receptions for 168 yards. I think Lair is very talented but for whatever reason his skills were not properly showcased in 2011.

7 - Ryan Orton (OG) -Senior from Eden Prairie who was the starter for four games this past season and started 14 in his four years on the active roster.

Similar to the defense we have quite a few starters and all of our backups returning.

1 - MarQueis Gray (QB) - The offense will start and stop with Gray. He is in a group all by himself as the only real play-maker on this offense.

2 - Ed Olson (LT) - Olson has started 18 games in his two years as a Gopher. This will be his third year as the starting LT and it is time for him to show some progress and be an anchor on Gray's blindside.

3 - Jimmy Gjere (RT) - played well last year as a redshirt freshman before having concussion issues. Gjere, like Olson, needs to solidify his position and start taking steps towards being one of the best players on the Gopher offense.

4 - Tommy Olson (OG) - Ed's brother started 3 games as a true freshman. Has a mean streak and should be a very good lineman for the next few years. We need some consistency and toughness on the OL, Olson is capable and needs to come through.

(positions of greater concern, the following are starters impact is unknown)

5 - Devin Crawford-Tufts (WR) -This might be kind of high for DCT but he has a chance to make the biggest impact on this offense filling the shoes of McKnight as our wideout most capable of making some big plays. Elite speed and played well in the last few games of the 2011 season.

6 - Marcus Jones (WR) - The diminutive slot receiver was making a nice name for himself as a very good return man and a bit of a weapon offensively before missing the last 5 games of the year with a knee injury. Jones is quick, elusive and could be a dangerous offensive player. He will be a starting slot receiver.

7 - Brandon Green (WR) - Green has been around for what feels like forever and is finally a senior. The former four-star recruit has not been a real play-maker for the Gopher offense. Not great speed but he has good hands and should be a regular contributor next year in the passing game.

8 - Donnell Kirkwood (RB) - This position is a huge question mark and it is very possible that nobody on the current roster will be your starting running back. Kirkwood is the one returning player with any significant (or insignificant) experience so he will get first crack at securing the job. A tough runner who hits the whole hard and generally falls forward as he is running through tacklers. Tough kid but lacking game-breaking speed. In my opinion he is not a feature back.

9 - Josh Campion (OG) - By the time the season hits Campion will be a redshirt freshman who is three years removed from high school football. He will be a 21 year old freshman. He is big, strong and mature. I will be shocked if he is not starting game one as a guard. He could easily move up the list to a much more valuable and reliable starter but until he proves me otherwise I'm leaving him here.

10 - Zac Epping (OC) - Center is a bit of a mystery going into 2012 but conventional wisdom is that Epping, who started eight games along the OL last year, will be your starting snapper.

11 - John Rabe (TE) - Started six games last year after transferring into the program. The senior caught 2 touchdowns and is the most experienced returning TE. Rabe may get pushed for playing time by Goodger and a couple of incoming freshmen, but he is a decent TE and will likely be starting game one at the position.

12 - Max Shortell (QB) - At one point in the season last year some thought it was time to start the Shortell era and move Gray away from QB. I like Shortell and think having this offseason to figure some things out will be incredibly valuable to him. If Gray goes down I am confident that Shortell is a solid back up as a passing quarterback.

13 - Drew Goodger (TE) - TE is a thin position and Goodger may have to play quite a bit. Last year Lair, Rabe and McGarry all saw significant time so I expect to see plenty of Goodger on the field.

14 - Marek Lenkiewicz (OT) -Started final two games of the year at LT. The sophomore will be a key reserve at tackle.

15 - Foster Bush (OT) - Redshirted last year but this is one of Kill's recruits so I expect that he will be in the 2-deep somewhere.

16 - Malcolm Moulton (WR) - Moulton was targeted last year more than I thought he would be. Unfortunately he dropped more balls than he should have. Moulton did a nice job of finding holes in the defense and getting open. He will play a lot, I just don't expect that he will be a starter.

17 - Zach Mottla (OC) -not 100% sold on Epping as the starting C, the JR walk-on saw action in six games last year and may get the opportunity to start this year.

18 - Caleb Bak (OG) - A walk-on who was forced into starting action last year as a redshirt freshman and played well. I'm not certain he'll crack the 2-deep but he played well enough last year that I'll give him the benefit of the doubt to start the year as a #2 guard.

20 - David Cobb (RB) - Had 10 carries last year as a true freshman. Likely will be third on the depth chart but should have opportunity to move up, the position is wide open.

19 - Devon Wright (RB) - Running back is an issue and Wright very well could earn the starting job. He got one carry last year as a redshirt freshman. He'll probably see the field more but I doubt he'll be the primary ball carrier.

21 - Joe Bjorklund (OG) - Redshirt freshman, may work his way into the depth chart.

There you have most of the names that you will likely see on game day next year. But there are a handful of incoming players who may push for and earn some playingtime.

1 - James Gillum (RB) - By most accounts Gillum has the most dynamic skill set amongst the running backs and would be my bet to earn the starting job with Kirkwood playing quite a bit as a change of pace guy. He is enrolled and will a part of spring practice so we'll get to see him fairly soon.

2 - Isaac Fruechte (WR) - JUCO receiver who will be coming in as a sophomore. I don't expect that Fruechte will contribute much this season.

(thus ends the JUCO transfers, next are the true freshmen who may or may not contribute)

3 - Roderick Williams Jr (RB) - As mentioned a few times, running back is wide open. RW2 could very easily come into the program and take ownership of the position. More likely is he would work is way further into the rotation as the season wears on but I fully expect him to contribute in 2011.

4 - Jamel Harbison (WR) - This is one of the incoming recruits that Gopher fans are excited about. Harbison is a stocky receiver who has some game-breaking ability. There has been some late charges by other programs to steal Harbison away from Coach Kill, but assuming he stays I expect he will contribute as a true freshman.

5 - Maxx Williams (TE) - As mentioned this position is thin and Williams has a good shot at coming in and playing immediately.

If the Gophers are able to land Andre McDonald, I would fully expect him to contribute as a true freshman. But until he commits I am not going to speculate. I believe that the rest of the offensive freshmen will either redshirt or contribute very little.

The offense is returning quite a bit of starters and depth from 2011. Quarterback will be a position of strength and I'm confident that the offensive line will be an improved unit. Receivers should be alright with a bit of potential to be better than just alright. Tight end and running back are bigger areas of concern, particularly running back. Here is my best guess at next fall's offensive depth chart. 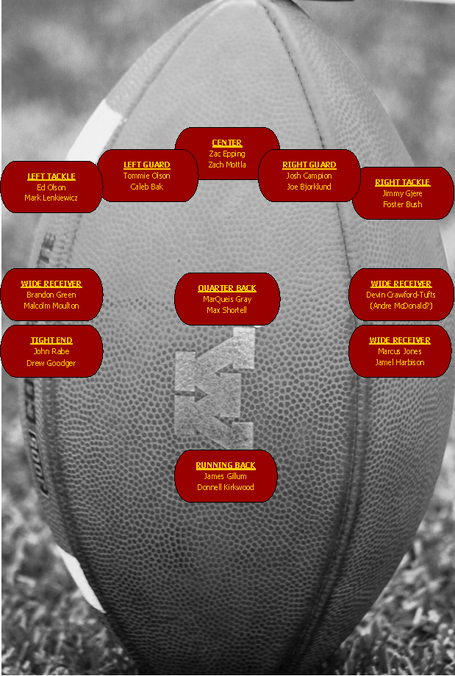 Production will be better, I promise.