Share All sharing options for: Andre McDonald is Reconsidering Minnesota 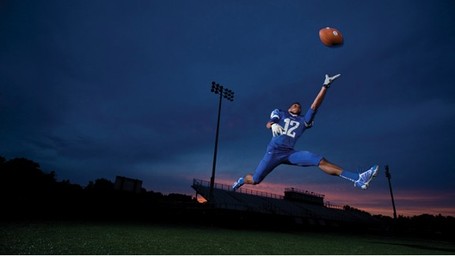 The top high school player in the state of Minnesota has reopened his recruitment and is once again considering the Gophers.

Last February McDonald committed to Jerry Kill and was the first member of the class of 2012. Throughout the late spring and summer there were rumors that he was softening on his Minnesota commitment and then in September he made the surprise commitment to Vanderbilt. McDonald went on to become the highest rated player (according to Rivals.com) and the only four-star ranked recruit in the state after catching 60 passes for 1,200+ yards and 17 touchdowns for Hopkins.

Well, McDonald's primary recruiter at Vandy left the Commadore's staff and is now on the Illini coaching staff. That has caused McDonald to drop Vandy and take a look around (again). He will be giving Minnesota an official visit this coming weekend and was quoted in this GopherIllustrated.com story from Ryan Burns as saying Minnesota never stopped recruiting him throughout the process.

"With Minnesota, they never stopped recruiting me," McDonald told GI. "I talk with Coach Z and Coach Anderson all the time over Facebook and Coach Miller came and talked with me at school right before Christmas break. I talk with Coach Z the most just because he uses Facebook the most, but Coach Miller just told me how much I mean to the program and how I'd have great success on and off the field. He also kept telling me how great of a place Minnesota could be for me."

He is still considering Vandy, though the smart money is not on him returning, and he is also taking a look at Minnesota (Jan 13) and Illinois (Jan 27).

Were McDonald to re-committ to Minnesota he would instantly be one of, if not the, top recruit to sign his name on a Gopher letter of intent on national signing day.

According to ESPN's evaluation of McDonald we can expect a good sized receiver who lacks top-end speed but is very good and using his body to create separation and catch anything thrown his way. His 6-3, 200 lb frame is impressive for a high school senior.

McDonald is a big, physical receiver that may lack great speed and a second gear as a vertical threat, but he makes plays on the ball with size, strength, savvy and great hands. He is a very good athlete that works to get open and off the line.

He is at his best in one-on-one match-ups on the jump ball as well as on underneath routes where he can use his frame to shield the ball for the defender. Is very good versus press off the line in terms of getting back on top of the DB and controlling the stem to give him a two-way go. Can stab and cut versus tight coverage and give himself just enough separation to use his frame and wide catch radius. Possesses strong hands that can fight for the ball in traffic.

Based on his skill set and the desire to land the best of our instate talent McDonald would be an outstanding get and a great recruiting recovery.