A look at what we can expect from the Gopher backcourt this season.

Share All sharing options for: Gopher Basketball 2012-13 - Don't Forget About The Backcourt Led by Andre Hollins

There are two names who are receiving a ton of preseason publicity when it comes to Golden Gopher basketball. Trevor Mbakwe and Rodney Williams are showing up on preseason lists for the top 100 players and Mbakwe is getting mention as a possible All-American. Those two are rather important to the success of this year's squad, but just as important and seemingly overlooked is the Gopher backcourt which features some pretty talented kids who are also capable of carrying this team on certain nights.

The adage goes that you win with guards in college basketball. Rodney and Trevor are going to be match-up nightmares for the rest of the Big Ten, but to take it to the next level we will need the backcourt to be outstanding as well. Gone is...well, nobody. The entire backcourt returns, which is good considering most of the minutes were taken by two true freshman, a sophomore and a JUCO junior.

The conversation begins at the point where sophomore, Andre Hollins returning. Hollins, along with Joe Coleman, was an incoming freshman guard that Gopher fans were eagerly anticipating. It is easy for those unfamiliar with the Gophers to look at his returning 8.7 points per game and not get too overly excited about what he is bringing back to the Gophers. But that is not the whole story.

After a solid month of November, albeit against poor competition, Hollins really struggled in December and January. His minutes dramatically declined and he really struggled against Big Ten teams. But that was no the end of the story as Hollins eventually figured things out and had an outstanding February and March.

Virtually every stat went up dramatically over the final couple months of the season for Hollins. Obviously his minutes increased, which should lead to more cumulative stats, but his FG% and his points per minute (and assist and rebounding) exceeded or were close to his season highs too. Everything was clicking for Hollins as he settled into the role of being the team's primary point guard and scoring option in the backcourt. And when Hollins was really pouring it on, the Gophers start accumulating wins again.

Hollins is explosive, plays good perimeter defense, has go-to scoring ability and is a great (I mean GREAT) free-throw shooter; which is a really valuable asset to have for a penetrating point guard. The sophomore is poised to have a huge season and really makes the Gopher duo of Mbakwe/Williams a true trio. I expect that he will average in the 12-14 ppg range with some nights blowing up for 20+ and others he'll defer scoring to the forwards. I do firmly believe that when the game is on the line, Andre Hollins is the one who will have the ball in his hands and I have confidence in his ability in those situations.

Enough of this Andre Hollins lovefest, moving on. Starting at one of the other perimeter spots will be junior, Austin Hollins. This Hollins (also from Memphis, not related to Andre) may not have the dynamic play-making ability of Andre but he more than makes up for with his defense, three-point shooting and typically very good decision making on the floor. Austin used lengthy 6-4 (nearly 6-5 imo) frame to frequently get deflections, steals and blocks (the latter two leading all perimeter players on the team). The son of an NBA coach is usually in the right position defensively and makes things difficult for opposing shooting guards and/or small forwards.

On the offensive end, this Hollins led the team with 51 made threes and averaged 9.2 points per game. He really doesn't have that explosive first step to blow by defenders but when the helpside is sleeping he is great at seeing the opportunity and getting to the rim for easy baskets. More of a smooth penetrator rather than explosive, imo. With a handful of other weapons for Big Ten defenses to worry about, expect Hollins to make more threes this year as he'll be open for kick-outs, quick reversals and weak-side threes. Austin isn't going to be the headline grabber very often but he is very good and essential to forcing defenses to defend our perimeter.

Likely starting at the other perimeter spot will be Joe Coleman. The sophomore from Hopkins had kind of the opposite season of Andre Hollins last year. Coleman struggled early and struggled late, but he had a very strong January flashing some offensive ability that has Gopher fans looking forward to an improved Coleman. Joe, like Austin, is a very good and a very tough defender. Joe also is strong with the ball and thrives on getting to the lane where he likes to draw contact and earn the chance at a three-point play. He got to the free throw line 106 times, second only to Rodney Williams who played about 500 more minutes than Joe did last year.

Defensively Coleman is pretty good. As mentioned he is a very tough kid who can be very physical with his man. I think at times he made some freshman mistakes with regards to being in position away from the ball but I fully expect that in his second season he will be much better and I think he has Big Ten All-Defensive team skills. 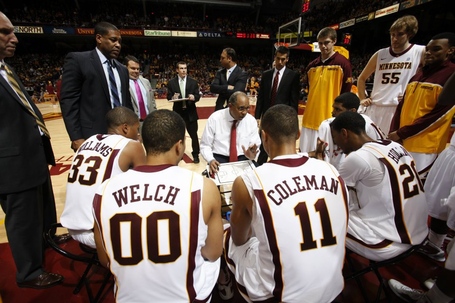 So we know he can get to the free throw line and he is pretty good defensively. What does the sophomore need to do better? Why did he follow up a seven game stretch where he averaged 12.4 ppg with four straight games of not getting a point (and 12 games at 3.5 ppg)? Because Joe Coleman needs to dramatically improve his shooting. Teams learned to sag WAY off Coleman, daring him to shoot while taking away any room to drive. And when he is able to penetrate he needs to convert his free throws more than 72% of the time. These are correctable areas and Joe Coleman's ability to shoot the ball outside of the lane is one of the biggest questions facing the Gophers this season. I'm a huge fan of Coleman's and I think he will easily be most improved this year and a key component to a very successful season.

First off the bench, and potentially a starter, is going to Julian Welch. Welch started 21 of 36 games last year and he was fine in a starting role, I certainly have confidence that he's capable of starting especially when an extra ball-handler is needed in the backcourt. In his first year as a Gopher Welch finished his junior season averaging 9.5 points while leading the Gophers in assists and three point shooting at nearly 44%.

His 9.5 is a good number and what I came to appreciate about Welch was that his scoring was pretty consistent. You didn't see a lot of 16 point games followed by 5. He managed to score double-figures in 21 games last year and his scoring waned a bit at the end of the year but may have been largely due to Dre Hollins taking more shots. Welch is a classic combo-guard who can play either point or shooting guard. As mentioned he led the team in assists but also was our most reliable three-point shooter. Not terribly explosive but certainly capable of getting by defenders and solid defense. Being the first guard off the bench is probably going to be an ideal role for Welch. I expect he'll come in for Coleman for a handful of minutes before shifting over to point for a few more while Andre gets a breather.

For much of the middle portion of the season, Welch assumed the role of leading the offense when we were lacking an identity. Rodney Williams hadn't figured out his role and Andre was still trying to figure things out, so Welch was the guy who took big shots for us and tried to get us into an offensive flow.

Also expected to get minutes off the bench will be the junior point guard, Maverick Ahanmisi who started seven games last year and averaged just over 13 minutes per game. Mav's minutes declined throughout the season, again probably because of the emergence of Andre, and I expect closer to 8 min per game is what we can expect to see for Ahanmisi. Mav is a decent shooter and the junior should be reliable on both ends of the floor to give several good minutes per half. His assist to turnover ratio improved from his freshman season to being a sophomore, I expect things like shooting percentage should be what we see improve the most this year.

Last but maybe not least is Wally Ellenson, the true freshman who may or may not earn much playing time this year. The Rice Lake, Wisconsin native is known was an explosive leaper who set a state-record in the high jump of seven feet, one inch in the 2012 regional meet was the nation's best by a high school athlete, and only two inches shy of an Olympic Trials qualifier. As a high school senior he averaged 21 points and 9 rebounds last year after averaging 22 and 8 as a junior. I'm curious to see his jump-shot, but reportedly he is a pretty good shooter to go along with his ability to get to the lane, elevate and score.

With the depth we have, I'm finding it hard to believe that he won't redshirt. But if he earns the minutes he may be an offensive spark off the bench. As it usually is with Tubby Smith as your coach, learn to play defense and you'll get minutes on the floor.

This group is really a huge key to the success of this season. We know what we are going to get out of Mbakwe and Williams. They are both going to average in the 13-16 ppg range and will draw most of the attention from opposing defense. But if this team wants to have any sort of balance and depth of scoring the next three leading scorers (maybe four) will all come from the backcourt, starting with Andre Hollins who will likely be the go-to scorer in end of game situations.

These guys are pretty talented and it is a pretty exciting backcourt. Look for big improvements from Coleman and Andre Hollins. We know what we'll get out of Welch and the other Hollins. But the message here is don't sleep on this backcourt. Let Rodney and Trevor get the headlines, but these guys can help carry the load too.