The Gopher gnomes recap the B1G with liberal does of hate and snark.

Welcome to your second edition of HATE WEEK, Gopher gnome style. The gnomes are not disheartened by a losing streak. As already noted, they have a foolproof plan for Gopher domination. Also, they have hobbies outside of Gopher sports, like annoying Bert Bielema by stealing all of his Natural Light and turning down his collars when he isn't looking. 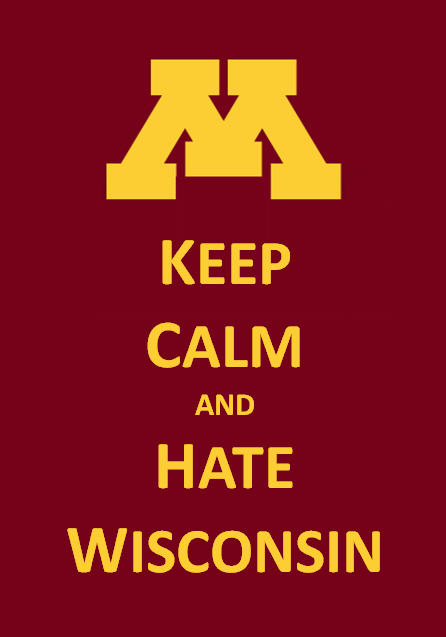 Ooooof. So, Purdue winning the Leaders? Not so much. They made the new struggling Wisconsin look like the super duper awesome running old Wisconsin. And they did it in the week before the Badgers play Minnesota. Thanks jerks. Why don't you do something useful like cure ACL tears or something?

Hammer & Rails is fed up. Like, FIRE HOPE fed up.

I have given Danny Hope the benefit of the doubt before, but he needs to be fired. His teams continue to be ill-prepared in anything resembling a big game. His in-game decision making and adjustments have been suspect for four years and have shown no signs of improving. His teams are not mentally tough, and check out at the slightest hint of adversity. He is blessed this year with the most talented team of his tenure, yet there has not been a change in results against the marquee teams on the schedule. We got beat 37-0 in his first year by Wisconsin, and got beat 38-14 with only two big plays leading to our touchdowns with a better team.

That is all on Danny Hope. He cannot pick a quarterback. He cannot prepare a team. His offensive coordinator cannot run more than a vanilla package despite finally having the experience that was an excuse two years ago. Finally, he cannot adjust in game. These last two games were a chance for Purdue to step forward and show that things could, indeed, be better under Hope. He failed miserably, so it is time for him to go.

I don't think H&R is wrong. Hope...well, he's not that good as far as I can tell. There's the matter of that extension he just got, but I'm not sure the fanbase will tolerate another year of this.

On another note, we really need to beat these guys. 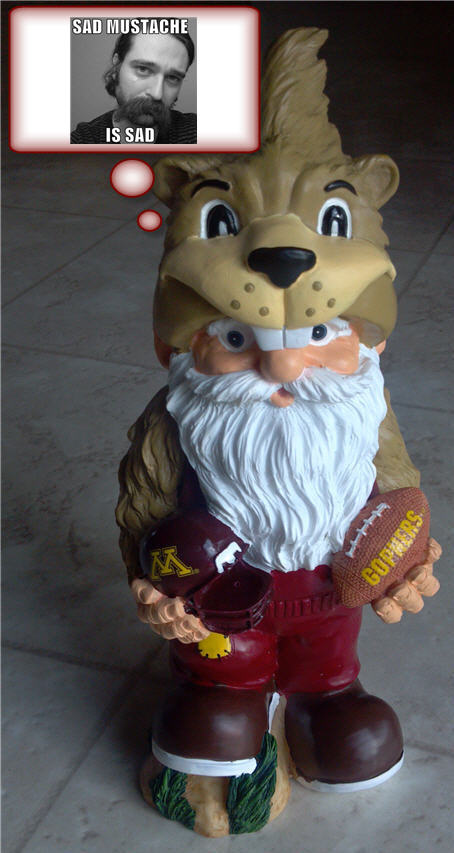 The gnomes wanted to spend more time on Purdue, but they feared that doing so would endanger their ACL's.

Up next? The Boilers head to Ohio State, their personal house of horrors as I recall. 11am on ABC/ESPN2 (depending on your area).

Now their just cementing their place at the bottom of the B1G totem pole. 45-0 nothing loss to Michigan? Sure, why not. A Lion Eye has become very melancholy but hasn't given up hope.

So can my preseason "5-6 going into the Northwestern game" come true? It looks really, really doubtful right now. Indiana just put up 49 on Ohio State’s defense – we won’t be favored in that game. Minnesota looks bad, and Purdue has imploded as well, but when we can’t even move the ball into the redzone at Michigan, why should we expect to even score 14 points in any of our upcoming games? Isn’t 2-9 going into Northwestern much more likely than 5-6 going into Northwestern? Probably.

But I’m just not there yet. Maybe I’m stubborn. Maybe I’m refusing to believe we’re headed for another 2-30 four-year run through the Big Ten. But I’m just not there. As of this moment, I’m expecting two weeks of soul searching and then a surprising performance against Indiana. I’m expecting all three home games to be competitive. I’m actually expecting the offense to begin to move the ball, believe it or not. I’ve gone with my gut since Rantoul, and it hasn’t failed me yet. And right now, my gut is saying that this was rock bottom and we’ll be pleasantly surprised by the final five games.

Yea, we really need to beat these guys too.

Up next? BYE WEEK

Well WTF was that? Y U NO RITUALLY SACRIFICE THE HOOSIER URBZ? 52-49? A Crimson Quarry has a hold of something that has been in short supply out in Hoosier land. Hope:

Sure, the Hoosiers suffered their fourth straight loss. However, three of these losses have been between two and four points. Even the 15-point loss at Northwestern could've been a different game if the Hoosiers had capitalized on an early first-and-goal opportunity, and they still made it a single-possession game in the fourth quarter. The Hoosiers have consistently been in the games they've lost, and just seem to be almost figuring out how to actually become a winning team. That said, the furious rally in the fourth quarter against Ohio State shouldn't confuse anyone about which team was better this afternoon. On a number of occasions, the Hoosiers could've given themselves a better chance to spring an incredible upset, but that's exactly what it would've been. An incredible upset.

They are clearly not the worst team in the conference. And honestly, if we faced them this week I'd be a little concerned (since our offense can't handle a shootout right now). For all their hard work and dedication to almost winning, the gnomes award Indiana the WIN! FIGHT! TRY! award for this week. 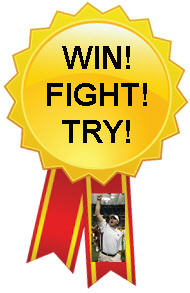 Up next? The Hoosiers play @ Navy. 2:30pm on CBS Sports Network

They beat Michigan State on the road in double OT. How very Iowa of them. Being a Hawkeye fan must be maddening (in addition to making you feel evil and dirty all of the time), because this is just so...Iowa of them.

AIRBHG needs to up his game (though he may already have done so). On a related note, BHGP is running a AIRBHGAPALOOZA festival this week. That's...ok, that's awesome.

Up next? Penn State comes to Kinnick. Expect someone to win on a blocked punt. 7pm on BTN.

There isn't much to say about this game. Michigan came out from the beginning and took it to Illinois in just about every facet of the game. Coming into the game it wasn't considered much of a matchup, and that proved to be true as Michigan coasted to an easy victory.

Up next? Time to finally beat Michigan State? Maybe. 2:30pm on BTN.

Well eff you very much MSU. That's about all the displeasure I can muster for now.

The Only Colors has plenty of angst to share though. Especially since they see the season slipping away:

I'm still drying off from Saturday. And I have no motivation to write this recap.

Credit to the non-student MSU fans. They nearly filled Spartan Stadium at the beginning of the game. They hadn't given up on the season. MSU started fast, but as the weather got worse, the fans continued to leave, and the Spartans unraveled in the fourth quarter, losing to Iowa 19-16 in double overtime. Three losses at home in less than a month. Woodshed, eh?

Are fans jumping ship and moving to the hardwood with basketball season officially underway? Wouldn't blame you. This football season is on the edge of disaster, and for as much as Mark Dantonio's program has come in five-plus years, Saturday provided some terrible flashbacks.

Up next? The Spartans travel to the Big House. Looking like Big Brother might finally win one. 2:30pm on BTN.

Won their BYE WEEK. In honor of their triumph, I feature Corn Nation going off on Notre Dame replay officials.

Let's not pick on the "unnecessary roughness" call against Usua Amanam. Bad calls happen...just like mistakenly calling Stepfan Taylor down just shy of the goal line. That's why we now have instant replay. At first view from the press box, it did look like Taylor was down. But when you go to the replays on the other side of the field, you clearly see Taylor never hit the ground...and from the end zone, he's in the end zone with the game tying touchdown.

But for some reason, the replay official let the play stand. That simply can't happen when you have the benefit of instant replay.

Up next? The Huskers look to avenge a loss to Northwestern. I fully expect Ryan Field to bleed red. 2:30pm on ABC/ESPN2 (depending on your area).

Ok, this is getting weird. What is with the middle of this recap matching up teams that play each other this week? It's like, why don't I just copy and past the "Up Next?" sections and save myself some time.

It's nice to be 6-1 after seven games, especially since there hasn't been a time all year when we've walked away from a game and said "hey, Northwestern played well for 60 minutes." Seriously, hasn't happened a once.

Up next? Nebby comes to town with a horde of fans. 2:30pm on ABC/ESPN2 (depending on your area).

Not a pretty or commanding win over Indiana, but they're still on track to offer the AP voters a chance to split the national title and spite the NCAA.

Land Grant Holy Land would like the defense to improve:

The defense will steal all the story lines for the fourth fifth sixth seventh straight week as they allowed an absurd 481 yards to a just top 50 Indiana offense (though sure to be rising after Ohio State's display of defensive generosity). While the Hoosiers showed much more than signs of life offensively in Kevin Wilson's second year at the helm, giving up 352 passing yards is particularly troubling from a secondary that's given little reason for optimism week in week out this young season. Luke Fickell and Everett Withers' group especially looked lost late in the game as Indiana scored a series of would-be garbage touchdowns (including one following a successful onside kick) keeping Ohio State fans on the heels in a night that seemingly dragged on and on.

Up next? Purdue comes to The Shoe to be ritually sacrificed. Try actually sacrificing them this time Ohio State. They play us the following week and we'd appreciate it. I know a guy who does nice tattoos. I can hook you up if you make this happen for me. Oh yea, game details...11am on ABC/ESPN2 (depending on your area).

BYE WEEK domination. I don't think anyone covered up or committed any crimes, so we'll call that a win for them.

Black Shoe Diaries has a statsy look at their upcoming game against Iowa:

If there is one thing we can count on, it's #AIRBHG. Mark Weisman isn't listed on the Iowa depth chart this week, though confirmation of some kind will come from Kirk Ferentz at his press conference. Aside from that possible factor, Iowa has won a game by one point, lost a game by one point, and beat MSU last week in double overtime. The loss to Iowa State also came by just a field goal. Meanwhile, Penn State's margin of defeat has turned into an increasingly-large margin of victory, including over a great offensive team in Northwestern. Say what you will about these two teams, but it seems like yet another occasion where Penn State's momentum could mean something.

Bucky's 5th Quarter sees the game as another step back to not sucking:

Wisconsin's borderline disastrous start to 2012 is far from being erased, but the Badgers took another step towards making up for it in West Lafayette, Ind., on Saturday. With a 38-14 win over the Purdue Boilermakers, the Badgers are the de-facto leaders of the Leaders Division, while all of their rivals for a Big Ten Championship remain winless.

It was a record-breaking day for Montee Ball, who became the Big Ten's all-time touchdowns leader in an incredible 29-carry, 247-yard, three-touchdown performance. 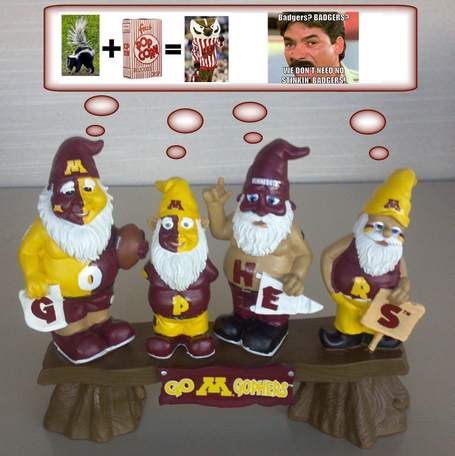