Well then. Welcome to bye week. I'm getting my butt kicked by work and to be honest, I'm still fighting off the post-Floyd hangover. So today's Nugz will be much shorter than my usual epics.

- Kill, not surprisingly, would love to see Gray healed up and ready to go for Northwestern because of the options he gives the team.

The biggest one is just to give Kill and his staff some options at the position. Shortell has done OK as Gray's replacement, Kill said, but the fact that the Gophers are trying to avoid sacrificing freshman Philip Nelson's season of eligibility means Shortell must try not to miss a play. The Gophers could use tailback (and high school quarterback) K.J. Maye for a play or two, "but that's not a long-term solution," Kill said.

Trouble is, after some encouraging improvement the first day or two after he injured his left knee and ankle against Western Michigan on Sept. 15, Gray "has leveled off," Kill said, and still can't do much more than jog. The Gophers have next weekend off before facing 24th-ranked Northwestern in TCF Bank Stadium on Oct. 13.

Ick. That's not all the good news:

And they have more injury problems than just at quarterback. Cornerback Martez Shabazz remains out because of a dislocated toe, and left guard Tommy Olson is sidelined by a sprained ankle. Tailback and special-teams engine Devon Wright injured a shoulder during a collision on a kick return Saturday, and defensive tackle Cameron Botticelli suffered an elbow injury.

Brock Vereen injured a knee during practice last week, Kill added, and was limited to nickel duty on passing downs. It was one reason Mark Weisman found so much running room around left tackle on Saturday, 177 yards worth on the day.

- Fuller files a similar story to Team Beard. Everyone together now: "We need Gray back...badly."

- The Daily says that in addition to getting healthy, the Gophers will use the bye week to focus on the fundamentals.

- Rachel Blount says the Gophers can use the loss as a learning experience. It's a very rational and even handed take on where the team can go from here. She's definitely following the GN "don't get too high or low" model:

For those of little faith, it will be tempting to write off the Gophers as the rodents of old. Perhaps those first four games were a mirage, an illusion destined to disappear once the piñatas on the schedule were replaced with superior competition.

But Kill was right about not reading too much into the Gophers' early success, and the theory is just as valid now that the other cleat has dropped. To know who the Gophers truly are, we need to see how they take a hard punch, one that came with the additional dismay of a pig-napping. Floyd might have been lost after his two-year residency in Minnesota, but the Gophers still have the chance to gain something from their somber Saturday at Kinnick Stadium.

- Sandell also thinks this could be a wake-up call for the team:

However, despite his team's readily apparent miscues, Kill did not exude disappointment.

It was if he saw the defeat as an unpleasant, but needed wake-up call. No coach would prefer a loss, but Kill seemed to have already, less than 30 minutes after exiting the field, sensed the benefit Saturday's end result could have.

For at least the next several weeks, the Gophers will be free of the building hype and the high expectations that had come with each victory.

The Gophers have plenty of weaknesses. That was known before Iowa's dismantling. But now the team has glaring proof of what can and will happen if those problem areas aren't addressed.

It's the type of setting Kill thrives on. With a bye week to awaiting them, Kill has an opportunity to fully dissect what went wrong in Iowa City and attempt to prevent another dramatic letdown.

- Kill wonders if maybe he should have gone all Tubby and used a TO to calm the guys down in the first half. In retrospect, that probably would have been the right call.

- FBT works on Rousing the Rouser following that thing that happened in that place.

- Sandell also breaks down the film from Iowa.

- Tyler Mason grades the Gophers performance at Iowa. He goes for a total grade of D. Hard to argue. Bright spot was Special Teams at a B+.

- The Northwestern game will be on either ESPN or ESPN2.

- WWL Blog drops the Gophers to 10th in their Power Rankings.

- BOWL PROJECTIONS: Both the WWL and OTE see PIZZA PIZZA in our future.

- The Daily has a nice feature on Gopher great Tyrone Carter.

- The U continues to offer new ticket packages to increase attendance for both students and single game buyers. For the full price single game buyers I'm not sure if the deals are enough to move the needle, but the student packs will hopefully have some success (assuming the team doesn't play the rest of the season the same way the played in the first half of Saturday's game of course).

The smart thing about the student mini packs? Offering students 2 versions, one that doesn't have the Michigan State game (which takes place over Thanksgiving Break) and one with that game included. That way there's no complaining or reluctance over having to pay for something that might not get used.

The voters spoke. Moving the Chains is now a part of the Tuesday Nugz. Sorry the chart sucks so much this week.

- Gophers recruit Daniel Edozie enjoyed his visit to MN this past weekend.

- ESPN or ESPN2 will broadcast at least 4 home games this season.

In February, ESPN or ESPN2 will showcase a border-battle with Wisconsin.

There is a chance the Gophers could appear on national television more times throughout the year, depending on which networks carry games. For example, the March 2 or 3 game against Penn State could be broadcast on ESPN, ESPN2 or the Big Ten Network.

- Russo checked out his first Gopher hockey practice and came away impressed (one positive of the stupid NHL lockout is that the Gopher hockey teams should get a bit more pub).

- The Gophers are ranked #2 in the USCHO.com poll behind Boston College. Screw those guys.

- The baseball team had their first practice at the new Siebert Field. Here is a photo gallery from Gopher Sports. 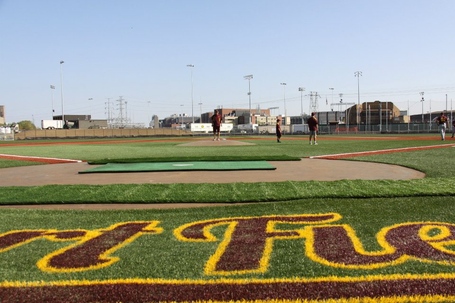 - The men's cross country team won it's first ever Roy Griak Invitational this past weekend.

- Populous was announced as the firm who will design the U's master facilities plan.

- The WWL Blog looks at the best and worst of the B1G in the month of September.

- WWL also rewinds what happened in the B1G this past weekend.

- I bring you, extreme asian carp fishing in slo-motion: