As fans, we'll go a long way to support our favorite teams or to watch them play. In my opinion, going above and beyond can make being a fan even more memorable and fun. Today I share some of my fave "crazy thing" stories related to the Gophers and offer you a chance to share your own.

Share All sharing options for: "You're Crazy!" - The Things We Do As Fans

On the Monday before the UNLV game, my good friend Sam (not his real name) and his wife had their first child. Everything went great and the new parents were home quickly. All was right with the world, except that Sam didn't have access to the Gophers game at home. Our original plan had been to watch the game at my house (the baby wasn't due until the following week), but Sam was obviously not going to shirk his new fatherly responsibilities to come over. So we hatched a plan. He had an iPad, I had a Macbook. Why not stream the game to him? I did my research and found that all I needed was a Facetime app for my Mac. Simple download, problem solved. But now my Macbook's microphone was on the fritz. Solution? Set up my cell phone up by the TV and put it on speakerphone. A minute or two aiming the Mac at the TV and we were all set. That's how on 8/30/12, Sam and I celebrated a Gopher victory at 2am over a speakerphone and Facetime.

I had told my wife about the plan before we did it. She didn't think I was serious. When I texted her the following photo later that night, the response I got was "LOL. You really did it. You guys are crazy." (Fun note: she's also the one who suggested that I use this for a story on TDG. For as much as she laughs at me, my wife is a huge enabler of my sports nuttiness). 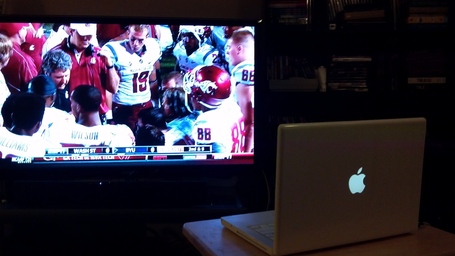 When I told coworkers and non-diehard sports fan friends the story I got the same type response. But to me, it wasn't nuts. Sam needed to see the game and whatever it took to make that happen just needed to happen.

Something tells me that I'm not the only one who hears this in relation to my Gopher sports fandom. I'm feel like I'm immune to the words at this point. Every fall, I hear it from co-workers every time they hear I'm taking yet another trip up to MN to watch the Gophers play. The Gophers may be the "hometown team" of my heart, but in as a resident of the Madison, WI, they play 4 hours away from me in God's Country. Home games are road trips for me, which means I rack up a lot of miles and drop more money than I'd like on gas/food throughout the course of a season. If it weren't for friends who were generous of their couches/spare bedrooms/fridges, I'd have even more food/lodging costs to consider. And of course none of this is counting actual road games to Iowa, Nebby, etc.

From Madison to the U and back in less than 24 hours. 8 hours of driving for 8 hours on the U campus (with 6 hours of sleep thrown in). That's the sort of trip I often have to make to fit some of the "home" games in with other responsibilities. When you look at it like that (the same amount of time driving as I spend on campus?), I guess I can see why people say it's a little nuts. But it's not to me. To me, that's just the price of being a Minnesota ex-pat and loving my Gophers.

And on the scale of craziness, I don't think those trips even register as all that nuts compared to what I consider to be my #1 crazy Gopher road trip. My junior year of college, the Gophers B1G home basketball opener was on the Tuesday after New Years. The Gophers were facing #10 Illinois and I wanted to be there. Unfortunately, class had started the day before at my school and I had a 2:30pm class on Tuesdays. If I skipped the first class and there were people on the wait-list, then I would get bumped. Since the class was a pre-req for my major and was being taught by my faculty adviser, that wasn't a risk I could take. So on that Monday I scheduled an appt with my advisor and asked for permission to skip his class. He asked why, probably assuming I had a dentist appointment or something. When I told him that I wanted to go to MN to watch the Gophers play Illinois, he gave me this funny look and laughed. He was so shocked that I told him the truth that he said he had to give me permission to skip. So that Tuesday I drove 4.5 hours to the U, went to the game with my girlfriend (stupid Illinois won), and drove back the same night (stopping to sleep 3 times) because I had an 8am Wed class I couldn't miss.

I know I'm not alone out here in the land of sports crazy. I've met too many others just like me. When I was tailgating before the Iowa game this past weekend, I met a U alum named John. He and some alumni friends had decided the night before that they were going to drive down to Iowa City to watch the Gophers (unsurprisingly this plan was hatched while drinking at the Twins game). After securing a DD and tickets off StubHub, they proceeded to drive through the night to get to IC. I guess the DD must have stopped for naps, because the trip took 7 hours. But there they were, tailgating at sunrise in Lot Q of the University of Iowa campus, ready to cheer the Gophers on to 5-0 (sigh..............).

Why do we do it? There's no rational reason for John and his buddies to drive down to Iowa to watch the game on a whim in the world of HDTV and a plethora of sports channels. I spent 9+ hours on the road in 2003 to see a game that was being broadcast on ESPN. Would Sam's life have been radically altered or his enjoyment as a fan ruined if he hadn't see a game against UNLV?

But being a fan isn't rational. I think we all know that by now. I mean, we're Gopher fans. We support a program that breaks our heart more often then it lifts us up. But I think that's what I like about being a fan. I have to be rational every day at my job. If being a fan was about being rational I think it would just be less fun. For me, it's all about the experiences and the memories. That's why I go to as many games as I can. It doesn't matter how bad the season might be going, I know I'll never lose a tailgate. And I don't care that people think I'm crazy. I take a perverse pride in being able to tell stories like these. When I see my old adviser at reunion events I know my request to skip will be something we talk about. I'm sure Sam will tell his daughter that story at some point (and if he doesn't, I will). And something tells me John and his buddies will laugh about their short notice road trip over beers in the future.

I know I'm crazy, so what about you?

So what's the craziest thing you've done as a fan (Gophers or otherwise)? Did you ever make a bet to shave your head if the Gophers lost? Did you take an epic road trip? Plan your wedding around the football schedule? Do you have a crazy outfit that your wear to games? Perhaps you have a lucky shirt that you never wash during the season. Or maybe you no longer go to games in person because you think you're bad luck (seriously, there are folks who do this). Do you have a way too elaborate tailgate setup? Did you build a top of the line man-cave? No story is too tame or too crazy (ok, some things are too crazy but I think you're all smart enough to know what crosses the line). Whatever it is, share it in the comments!