In all likelihood, the loser of this game stands no chance at going bowling. Even a victory will only be another step, as either team will have more work to do in order to hit 6 wins.

Share All sharing options for: Previewing a Must Win Game - Purdue @ Minnesota

So yea, kind of an important game this weekend no? Before we get to it, I need to offer a quick apology, as I know this preview is light on details about Purdue players. Work kicked my butt to the point where more in research and analysis like that wasn't going to happen. You'll have to survive on the thin gruel of NCAA.org stats. Sorry!

It's easy to over-hype, but I think this is a pretty pivotal week for the Gophers. Win, and not only to you keep your bowl hopes alive but you give yourself a breather from a growing storm of criticism. You end a 3 game losing streak. You pick up your first B1G win. You give your fans another win at home to cheer. If Phillip Nelson plays well and you win then you probably quiet a bit of the RS talk/angst. If you're lucky you also build confidence and momentum going into the coming weeks. You certainly keep yourself on track to have a little momentum going into the offseason.

If you lose you're .500 overall and win-less in the B1G. The angst in the fanbase and media grows louder. The folks who are already prepared to declare Kill a failure in action sharpen the knives a little further. You probably doom yourself to no bowl game. You run the risk of having the team start getting down on themselves mentally. You increase the talk about "yet another Gopher collapse."

Don't get me wrong, a win against this Purdue squad won't be something to rush the field over. But I think we can all see the importance a W has in terms of improving the mood around the program.

...the weather for tailgating...

...and here's how the hourly look for kickoff and beyond...

The Boilermakers finished 7-6 (4-4). It was an up an down season, one that included a loss to Rice (ugh) but also a win over Ohio State at home (yes, OSU wasn't great but still). Obviously that also included a BIG win over the Gophers. The Boilers made a bowl (something that seemed out of reach before the OSU game) and beat a Western Michigan team with a powerful offense.

After a promising 3-1 start (whose loss was a close one @ Notre Dame) the Boilers have gone into a bit of a tailspin in the B1G season. They were shellacked by both Michigan and Wisconsin (something that shouldn't happen to a team with B1G title game aspirations) and last week's upset bid over OSU fell soul crushingly short. Now they need to pick up 3 wins in their next 5 in order to go bowling and the B1G (or Leaders East Division) title hopes are gone.

The overall series record is close, with Minnesota holding a 1 game edge (33-32-3 overall).

Purdue Pete is not the official mascot of Purdue. The Official Mascot is the Boilermaker Special. 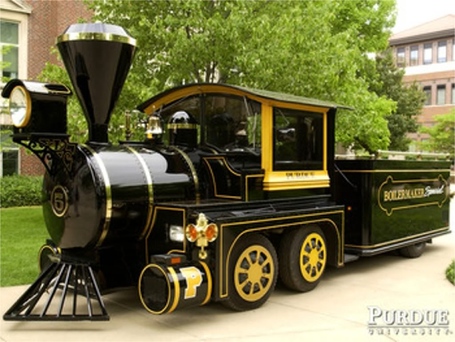 Head Coach: Danny Hope (4th season) is 19-25 (10-17) in his time at Purdue. His seat is pretty warm, but he just signed an extension last season so who knows if Hammer & Rails will get their wish of Hope being fired at the end of the year. You'd certainly think that another bowl game gets him a breather.

Offensive Coordinator: Gary Nord (4th season). I think his time at Purdue can be summed up by this link that GN shared earlier in the week: Purdue Football Fan Gripes: The Nordfense

Defensive Coordinator: Tim Tibesar (1st year). I know nothing about the guy really. MN native who coached in the CFL before this.

The Gophers finished the non-con season +7 for turnover margin. They're now -4. That's not helping anything. This team isn't good enough yet to overcome big mistakes. Holding onto the ball will be a key part of putting themselves in position to win. Creating turnovers is also vital. I'm not sure if our offense is playing well enough to win without the momentum boost of a pick or fumble recovery.

Purdue's rushing offense isn't great. Obviously the Wisconsin game is skewing the numbers, but clearly there must be some issues to be dealt with if our rush defense rates better despite being gouged by Wisconsin as well. Getting the running game going is also important if Phillip Nelson is going to get hot. Most importantly, we need to find a way to get the run game going from the RB position. I think folks are right and we risk injuring PN already if he carries the ball too frequently.

I'm a broken record on this one, but the defense needs to be sound and stop getting gouged. Sad stat. Before the Iowa game Minnesota was the only team IN THE COUNTRY to avoid giving up a play over 30 yards. Now? We're last in the B1G in that stat. This is important, not only to keep the game within reach, but to get off the field. The defense cannot be on the field so much or they will wear down, especially against the run.

- Be flawless on special teams

They don't need to be spectacular, but special teams cannot be a source of mistakes. That means no missed PATs, no missed FGs inside of 40 or 45, no miscommunications/bad decisions/fumbles of KO's and punts, and no breakdowns in coverages.

- Give the crowd a reason to cheer

The line on this game is only within 7 because it's at home. Even with that, the Gophers are still underdogs. They need to take advantage of being at home and give the crowd reason to be a factor (it'd be great if they were a factor anyway but I digress).

- Get Purdue down on themselves early

I'm guessing it might be possible to get Purdue to quit on themselves early in the game. That will require Minnesota to score enough to put Purdue into an early hole, something that doesn't seem likely. But if they pull it off, I'm guessing Purdue won't be prepared to claw back given their performance in similar situations previously combined with the gut punch loss they just took.

My head tells me we find ways to lose this game. There have been too many mistakes and missed opportunities over the past few weeks for me to think otherwise. But my heart is still 100% homer and I don't want to give up on the bowl dream just yet. So I'm calling it for the Gophers in a very close one. Minnesota 20, Purdue 17.