Gopher hockey feels some bye week love, the football team gets back to basics, basketball has a new commit, and ASU fans are bad parents.

I hate bye weeks. Though it does make it easier for me to finish all the "prep the yard for winter" tasks that I've been ignoring. The media have also taken advantage of the bye to shine some more light on the hockey team.

- Russo takes a look at the expectations (both internal and external) facing the hockey team.

"Expectations are just different," said forward Nick Bjugstad, who passed up a multi-million dollar contract with the Florida Panthers to return for his junior season and was among a handful of players at Gophers media day on Wednesday. "Our goal is a national championship."

A year ago, the Gophers men's hockey team was predicted to, as coach Don Lucia says, finish "in the middle of the pack."

But the Gophers surprised everybody, winning the MacNaughton Cup and making a 20th Frozen Four appearance. So when you return six of your top seven scorers and all six starting defensemen from that team, expectations naturally skyrocket, which explains why the Gophers enter this season tied with defending national champ Boston College atop the USA Today poll and ranked second in the USCHO.com poll.

- The one big question mark coming into the year? Goalie. Kent Patterson was insane last year. Jess Myers says careful handling of the young goalies early in the year will be key. So who are the potential starting net-minders?

Patterson, after playing all but one period of last season, has signed with the Colorado Avalanche and is off toiling for a paycheck. He leaves behind two prime candidates to be the "next one" in the Gophers crease, junior Michael Shibrowski and freshman Adam Wilcox. Shibrowski's got experience, sort of. He was the goalie of record for 20 minutes last season. Wilcox has the hype, sort of. He comes to Dinkytown after two very successful seasons of junior hockey.

According to reports from inside the locker room, Shibrowski is the serious, hungry one, having gotten a tiny bite of the apple last season, eager for more. Wilcox is the more youthful, goofy fun-loving half of the pair. Apparently every team's got one of those.

- Tyler Mason and The Daily continue the expectations theme.

- Phil Miller reports that much of the coaching staff is taking advantage of the bye week to recruit, while Coach Kill and a small staff whip everyone into shape on the fundamentals.

"We've got the seven [coaches] on the road that we can have" at one time, coach Jerry Kill said of the Gophers' midseason recruiting efforts. That left Kill, his coordinators and the team's graduate assistants to run a back-to-the-fundamentals practice in which "we worked very hard. Not very long, but very intense."

He also delivers some good news (Martez Shabazz and Brock Vereen are practicing) with not not so good news (MarQueis Gray is not). Until Gray shows more progress the staff is preparing like Max Shortell will be the starter. Shama says folks should prepare to see Gray on the sidelines for Northwestern.

- Speaking of Max, Kill defended him and noted the tough situation he's stepped into.

But Kill didn't put much blame on the sophomore quarterback for those interceptions. The first one was a deep pass intended for A.J. Barker that was taken away by Iowa's Tanner Miller along the sideline.

"I think that as you watch film, the first interception's really not an interception. Our receiver caught the ball, A.J. Barker, and the defensive back made a great play and took it out of A.J.'s hands," Kill said. "The next interception, we throw a fade route, which is a route that's hard to get an interception, and our wide receiver doesn't go and get the ball. And then the third interception we threw, the receiver ran the wrong route. He was anticipating doing one thing and it went the wrong way. . . .

"We've got to make some plays. I don't think we tell him anything different because I think we've got to do a better job of route running and catching the football."

- Kill feels that safety is an area in need of attention and improvement over the bye week.

"When you play a run football team you've got to have a safety in the box that is going to make plays," Kill said. "We just missed some tackles in that spot. If we don't do that we're in much better shape."

Fronted by the emergence of sophomore safety Derrick Wells, upgraded play in the secondary has been a major reason for the Gophers' success this season. Wells, who would be a likely choice for the team's defensive MVP so far, leads the Gophers in tackles (36) and owns two of their seven interceptions.

Wells stumbled at Iowa, however, missing a number of tackles he had been making in the first four games. Botched tackles plagued the rest of the secondary as well. Weisman was getting downfield field at frequent rate, which put increased pressure on the Gophers' defensive backs to make stops. Until Kill was able to refocus his team at halftime, those stops didn't come.

Wells' struggles and the letdowns in the secondary that resulted were proof that the Gophers don't have the depth at safety and cornerback to withstand too many shortcomings or injuries.

- The Daily takes a look at another former Gopher, Asad Abdul-Khaliq, and his work with a NJ non-profit.

- Daniel Edozie has committed to the Gophers following his visit this past weekend. Don't know enough about him to have comments yet.

- Amelia says things are about to heat up for local recruit Rashad Vaughn.

- Two assistant AD's let go. Doesn't seem like a huge surprise given that there is a new AD.

- Down With Goldy gets his preview of the top 68 NCAA men's teams going in true DWG style.

- Not totally a CBB story I guess, but Royce White is back in the news as he has not reported for Rockets training camp. It sounds like he's holding out to get permission to use a bus to travel to "close" road games since flying is a big problem for him with his anxiety disorder. I really hope things work out for Royce, but this is the sort of start that I'm sure he was hoping to avoid.

- Nebraksa's facilities are insane. I'm glad this is what Teague and T. Denny are touring as a model though.

- Can beer is good beer. Here's an article talking about why. Mmmmm...SURLY.

- Speaking of Surly, their new destination brewery will be less than a mile from TCFBS. The U needs to work with the TCFBS alcohol distributor and make Surly part of that lineup. Also, can you say delicious beer garden tailgate?

- Grantland asks whether fantasy football is messing with how we perceive NFL players. It's an interesting read. 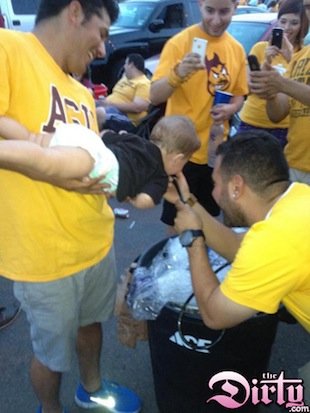