Football is back. Let us all rejoice and celebrate the end of BYE WEEK tyranny.

- The Gophers continue to release quality hype videos. This time, it's "Now or Never" for Homecoming. I love that they are selling the games as having such a strong party vibe.

- In case you hadn't heard, the Gophers are also running a $20 Homecoming ticket sale. Make sure everyone you know hears about it and let's get another sellout!

- I put this in the comments of yesterday's Nugz, but thought it deserved a link here. FBT gives us the not so pretty picture recap/film breakdown of a small part of the Iowa game.

- TV SCHEDULING: The Wisconsin game will be at 11am on ESPNU. Looks like the flip cup tourney that will be held between the Gopher and Badger fans at our tailgate in Madison will have to go faster than hoped for.

- Random...does anyone know if the U has (or has looked into) the kind of cell tech for stadiums that is mentioned in this story about Camp Randall? 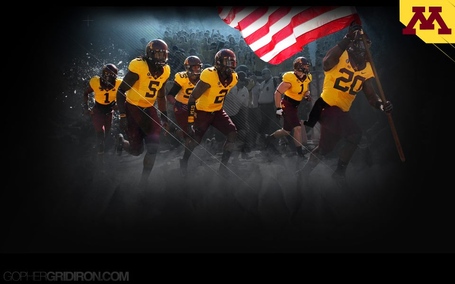 - Here's a non-animated drive chart of my epic contest versus the hated BYE WEEK. (click to embiggen) 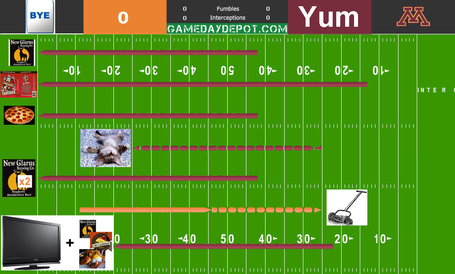 - Roman talks about the transformation of Nate Schmidt. RELATED: A quick reminder of why we love Schmidt and our Gophers:

- The PiPress notes that the Gophers are pretty loaded this year.

- Gophers are the undisputed #1 in the USA Today poll.

- Both of this weekend's games will now be on regular FSN instead of FSN Plus.

- Gopher Sports has highlights and stats for the 7-0 thrashing of something called a Lethbridge.

- GPL has a Media Day roundup.

- A national look at the Gophers non-con schedule.

- CBS Sports gives their list of the Top 100 college hoopsters. The Gophers get 2, highlighted by Trevor Mbakwe at #15 (Rodney Williams was #93).

- The Gophers have announced their Pick Your Pack promos for this season: 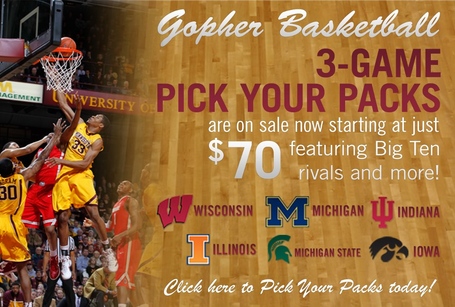 - Gophers volleyball's matchup with Nebraska will be aired live on ESPN2 this Sunday.

- ALL THE BOWL PROJECTIONS: Off Tackle Empire, BTN, and WWL all see the Gophers in the PIZZA² Bowl

- ALL THE POWER RANKINGS: WWL and Jacobi see the Gophers in the #10 spot. BTN disagrees and puts them at #8.

- The WWL Blog has their Week 7 preview up.
- Dienhart gives us his "Best of Week 7" picks. Gophers/Northwestern is listed as his "Best Matchup."

- I'm sure many of you have seen this, but this Hawkeye Nice video was widely discussed at the Iowa tailgate lots. Worth a look:

- Tim Beckman is an idiot and an NCAA violator. Oh, and he's gross (hit the link for a GIF). 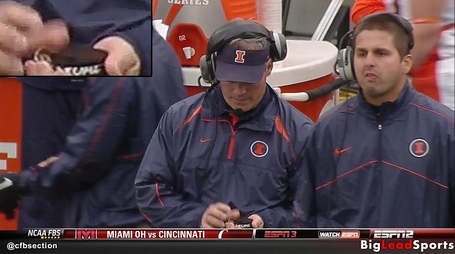 - Speaking of Illinois and things that are just gross...

- Nebraska fans are a testy bunch this week. Some levity: 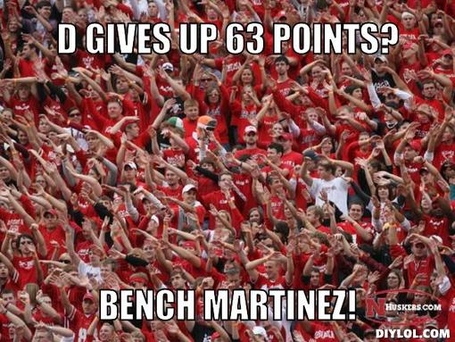 - Purdue shows us a tailgate machine to avoid at all costs. No, you should still stay away even if they are offering you candy. 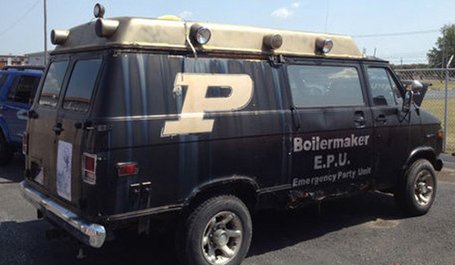 - It looks like Wisconsin hockey might be losing their most promising incoming recruit to NCAA penalties. Nic Kerdiles has been ruled ineligible by the NCAA (not totally clear what for) and must sit out 1 full season. If upheld (Wisconsin is appealing) this likely means Kerdiles will never play for the Badgers (he'd go play WHL before leaving for the NHL instead of sitting out of hockey for a full year).

Even as news broke Tuesday of Ohio State locking in a couple of intriguing future games – a home-and-home deal with TCU starting in 2018 – Buckeyes athletic director Gene Smith was looking for more.

Expect Ohio State to take on more highly regard non-conference competition, such as Cal from the Pac 12. (AP)Fans, thrilled at the prospect of a new quality opponent and a chance for Urban Meyer to reach into Texas recruiting grounds, were buzzing. Ohio State already had Cincinnati of the Big East locked in for 2018. Now here was a Big 12 team, too. In the past, Ohio State may have added two local Mid-American Conference schools and called it a day.

So a non-conference schedule with no MAC schools, no Sun Belt teams, no games against teams from the old I-AA ranks – all of which are often dull mismatches? In the past few years, major powers have played three and even four of them per season.

- Charlie Weis manages to be both a dick and a horrible college coach at the same time...no one could have predicted. I'm sure this will do wonders for his relationship with the student paper.

- This past weekend's game between Bethel and Concordia is getting some national attention for its crazy finish.

- UA unveiled it's Freedom Jersey unis, which will be worn by BC and Hawaii. BC's look like this: 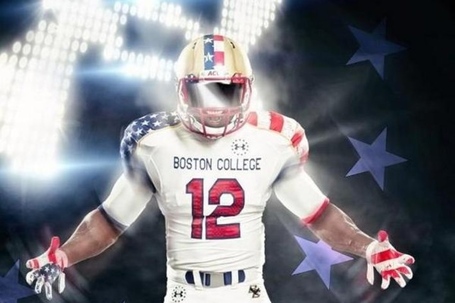 - Notre Dame's special uniforms were as DERPtastic as expected.

- Michigan's new bball uniforms may have "meh" shorts, but the tops don't look too bad: 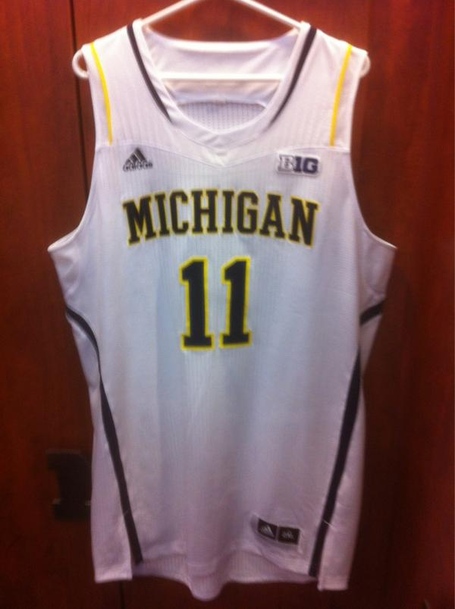 - TCU's had new helmets this past weekend. They didn't help. 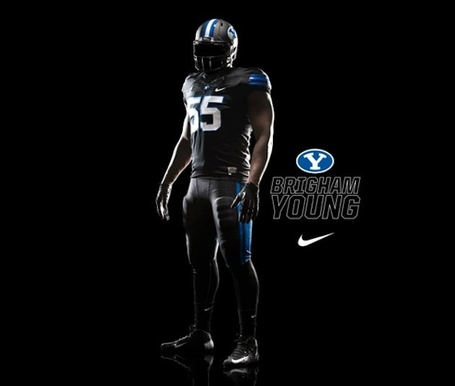 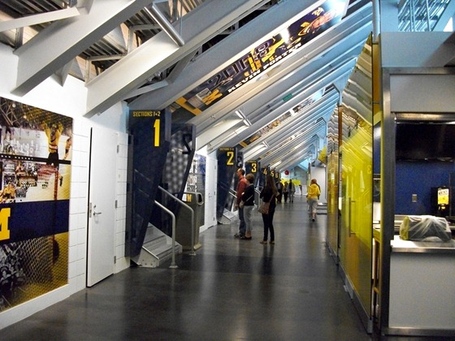 - Ohio State's band put on a sweet halftime show this past weekend. HIGHLY RECOMMEND you watch this. My fave parts are the galloping horse and the Mario level-complete castle sequence where they drop a Michigan flag (to loud boos) and then set off fireworks. Fantastic.

- I'm going to be so ridiculously sad when Lee Corso is no longer on College GameDay. Who else is going to terrorize Herbie with guns and live animals at pick 'em time? 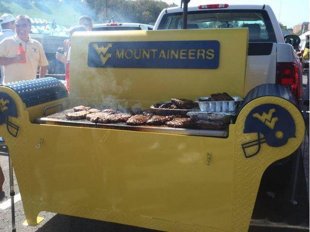