The Gophers Lost? Entries From The Great Nebraska Roadtrip

Best. Roadtrip. Ever. Here's the blow by blow account of my trip to the friendly cornfields of Nebraska. A trip where a case of mistaken identity led to a Twitter rumor involving Rex Burkhead's mother, where I didn't even care that the Gophers played terribly, and where Nebraska fans realized that hockey exists and that Gopher fans strongly dislike the Badgers who play and coach it.

Share All sharing options for: The Gophers Lost? Entries From The Great Nebraska Roadtrip

You must travel to Nebraska for a game. The people are friendly and will offer to give/buy you drinks. The stadium is beautiful and fun to visit. There is plenty of tasty food to enjoy in town. And the downtown area offers plenty of great spots to hit before or after a game.

This was, without question, the best roadtrip I've taken. On Friday night (after the Rex Burkhead's mom incident...read below for more), I already knew there was nothing the Gophers could do to screw up this weekend. And I was right.

Apologies in advance, I decided to challenge AJ Barker for length with this one. I tried to throw in plenty of pretty pictures to illustrate if you tire of my ramblings.

Approx 6am through 8:09am: Driving through Wisconsin.

8:10am: I cross into Iowa. I make a mental note to fly to Lincoln the next time to avoid spending time in this smelly, pig feces infested, hellhole. 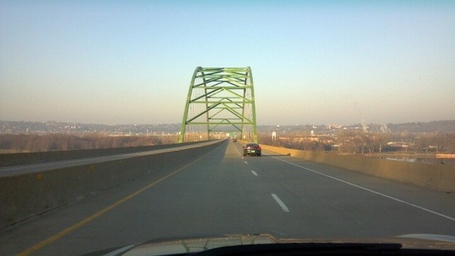 11am-ish: Meet up with my Gopher buddy in Des Moines and head out for Nebraska.

1pm: Stop at a Shell Station in BFE Western Iowa. There is more Nebraska gear for sale than Iowa gear. I find this funny.

1:30pm-ish: We escape Iowa. The scars and smell will take longer to fade.

2pm: The freeway between Omaha and Lincoln is being expanded to 3 lanes each way (it's mostly done). This is solely to accommodate Husker football traffic.

2:38pm: Lincoln! Much like in Columbus, you can see the stadium from the highway. Our hotel (the new Courtyard Marriott - which I highly recommend) is closer to the stadium than expected. They were also kind enough to provide us with a room with this view: 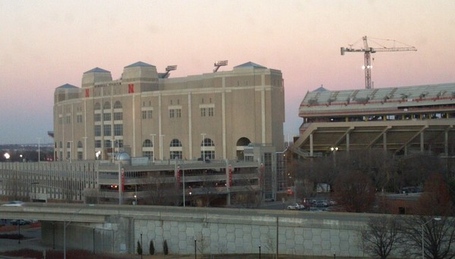 3:07pm: I'm sure by now you've heard stories about how Nebraska fans are the friendliest in all of CFB? In an ironic twist, our first "man on the street" encounter was with a dude hangin out his car window screaming "FUCK MINNESOTA!" He did prove to be the exception to the rule.

3:15pm: Meet up with my Husker buddy at The Watering Hole, a downtown Lincoln bar famous for their wings. 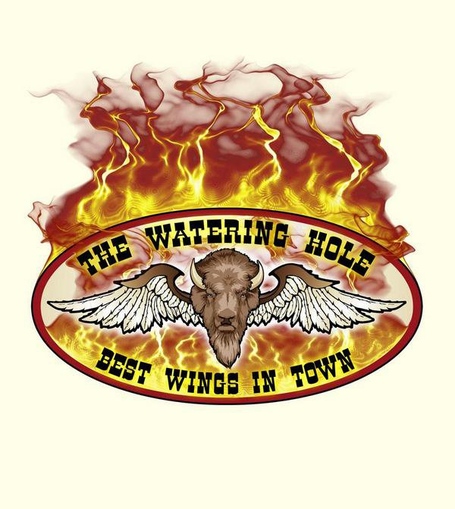 4:30-ish: Leave The Watering Hole in a wing coma. Can relate the following facts:

- Get the grilled (yes, grilled) wings. They are awesome! I got them done with mild because spice isn't my thing.

- Make sure to get several of the other wing sauces on the side. We got the Honey BBQ, Blackberry BBQ, and Apricot. All three were awesome, but I recommend the Blackberry.

- The wings were big and full of tender meat. These are not the tiny bony things they serve at BW3's.

- Serve good local beer on tap. Take advantage of that.

7:49pm: Beer run. Based on Husker fan recommendations, found ourselves at The Still and were able to get Grainbelt Nordeast. 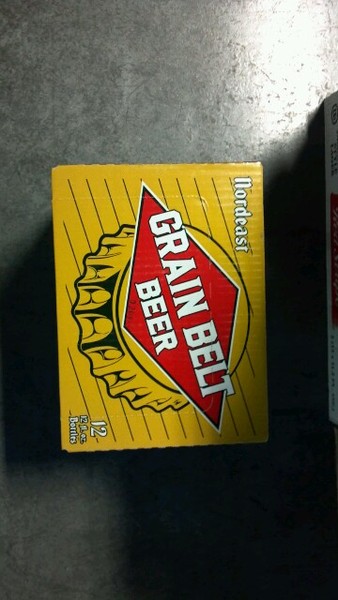 8:30pm: Arrive at the Single Barrel. It's a newer bar/restaurant in downtown. Its claim to fame is a big selection of top shelf whiskey and bourbon (Knob Creek is the rail) and as the weekend home of the Sidetrack Band. 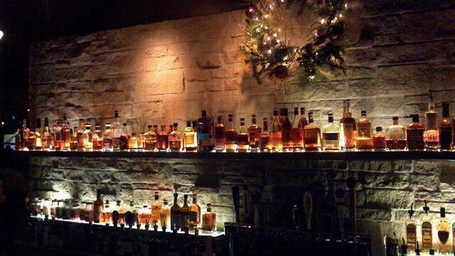 8:45pm through 11pm: Enjoy delicious food and Four Roses Single Barrel. The Gophers volleyball game was on TV during this period as well. That led to some lively back and forth between the Gophers fans and the Huskers fans in attendance. 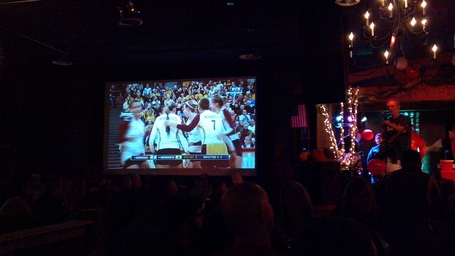 11:06pm through 11:32pm: A series of errors in communication between my Husker friends and I led me to tweet out that Rex Burkhead's mom was dancing on a table. The original claim was actually that she was riding a mechanical bull, but...ya know...mistakes happen. After many retweets and demands for photos from followers, my Nebby spotters started to recant their eyewitness testimony. My first unfounded Twitter rumor was finally killed when the real mother of Rex Burkhead (this time confirmed by Husker fans outside of my group) got on stage with the Sidetrack Band.

12:30am: We take advantage of the nice weather and the hotel's firepit. Day 1 rates as excellent. 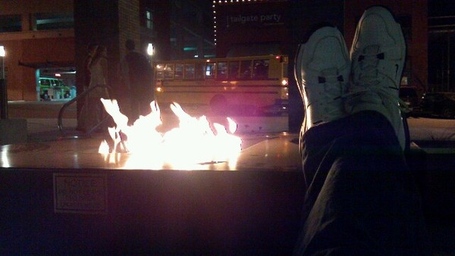 10am: We start the day by exploring the tailgate lots near the stadium. We are invited to join 3 tailgates but must politely decline since we're meeting my Husker buddy at 10:30 at Barry's.

10:30am: Barry's Husker Bar. Lots of TV's, a party room, an ice bar, and a rooftop deck with a view of the stadium. All good signs for a good day.

11:06am: On our walk over to the first tailgate, we see that even gas stations allow for tailgating in Lincoln. I take photos to prove to the Minneapolis City Council that it is possible to allow fun in a metropolitan area.

11:15am: We arrive at the HuskerMax.com tailgate. Dave, the head of HuskerMax.com, had kindly held 25 entries into the tailgate for Gopher fans. My MN buddy saw the invite on The Hole and was able to get us access.

12:06pm: After delicious pulled pork and Husker red hotdogs (plus some strong beverages) I get to meet Husker legend (and Heisman Trophy winner) Johnny Rodgers. 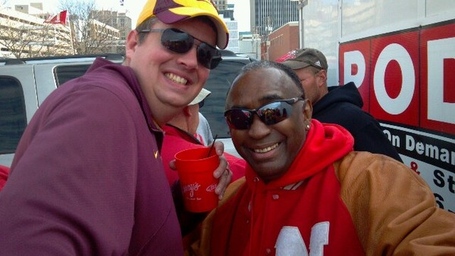 12:40pm: We head out for tailgate #2. My Husker friend was able to get us access to the Champions Club tailgate right next to Memorial Stadium. On they way, we notice that tailgating takes place UNDER THE FREEWAY. I make a mental note to force the Minneapolis City Council to watch a slideshow of this weekend Clockwork Orange style until they understand that tailgating fun is not to be feared on private or city property. 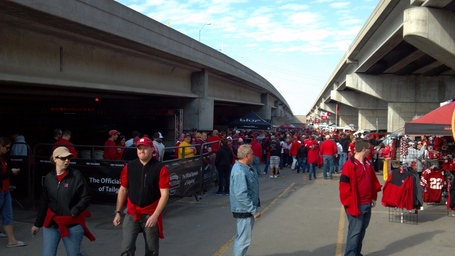 1pm: Champions Club is excellent. We meet more friendly folks and get to watch Iowa lose to Michigan. Ha ha Iowa...no bowl game for you! Here's the view from the club: 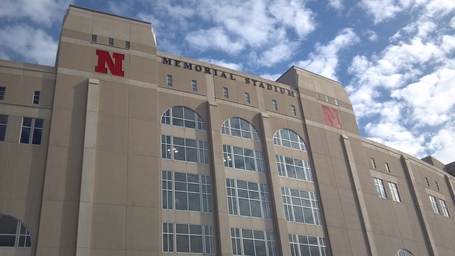 2:05pm: We head into the stadium. Word to the wise, if you have seats in the upper deck visitors sections, make sure to get there early if you want to see any of the pregame. There are barely any concourse entrances for those sections.

2:25pm: Their student section also has a banner. The major difference? Actual students surrounding it. 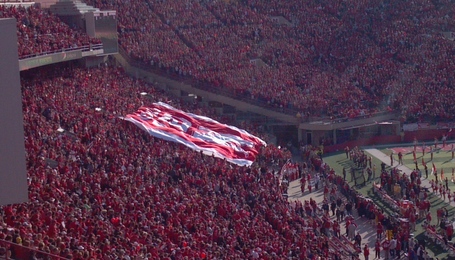 2:30pm: We enjoy the senior day festivities. The Huskers fans sure do love Rex Burkhead.

2:48pm: Huskers get on the board with a field goal. RELEASE THE BALLOONS! 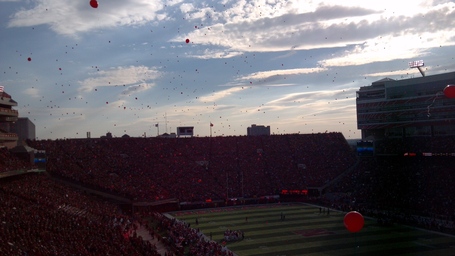 2:49pm until whenever halftime was: Things happened. Few of them positive for us. Thankfully I was in a great mood and was far enough away from the action to miss most of the carnage if I so chose. 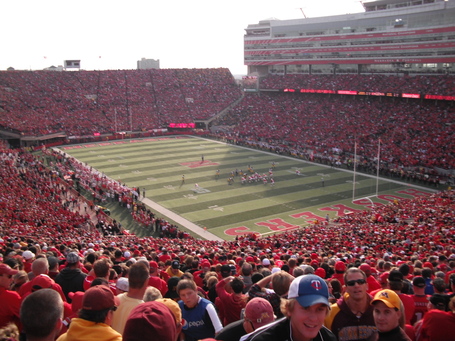 Before we leave I notice that PURE EVIL was among us. The cold feeling that accompanies Lil' Red is unmistakeable. The Gophers never stood a chance once this abomination entered the stadium. 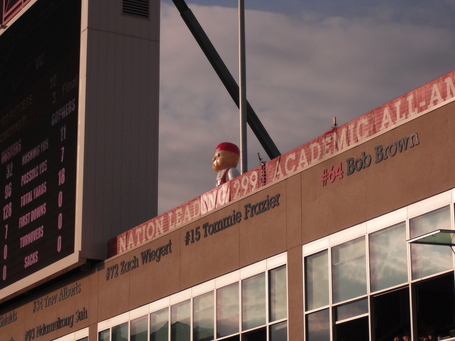 Halftime until about 4:47pm: A great feature of Nebraska games? You are ALLOWED TO LEAVE the stadium and return. You read that right. So long as you are back through the gates by the end of the 3rd quarter, you can leave and come back. Personally, I think that is awesome no matter what. But if you're lucky enough to have a friend who hooks you up with Champions Club access it is a Festivus miracle. While enjoying more free food and beverage, a Nebby couple came over to compliment me on my Zubaz. By the time we were done talking they have provided the three of us access to the Club Level seats on the home sideline. They said they weren't going back to the game and we should go in their place. This might be the first time in my life that I was glad the Gophers made a game unwatchable after the first half.

5:00pm until 5:50pm: Rubbing elbows with the high rollers. My Nebby friend let me know later that his state senator was sitting a few rows in front of us and shook his head at me every time he walked (not a fan of the Zubaz I guess). 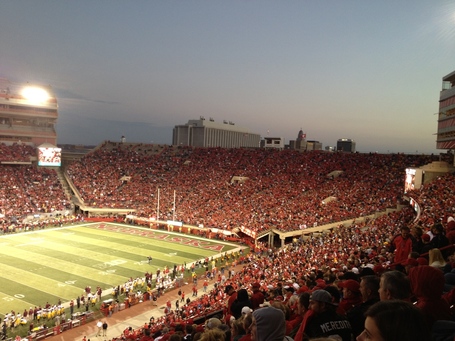 An important foodie sidenote: You may have heard about a Nebraska specialty called a runza. A runza is a bread pocket filled with beef, pork, and cabbage. I don't like cabbage. At all. I loved the runza. I recommend you try one. Kinda like how you have to have BBQ when you are in the south.

6:00pm: Got down to the field level. Apparently this is not hard to do. Watched the Gophers run off the field, got photos of the Nebraska players (I resisted the temptation to yell something to Rex about his mom and a table), and stayed to watch the bands play and march out. Once the bands were off the field we were allowed on to it. 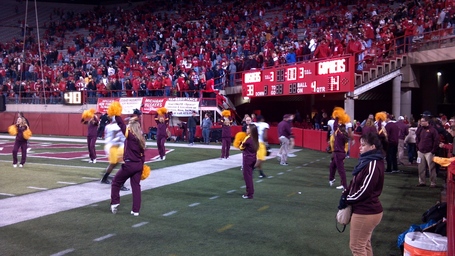 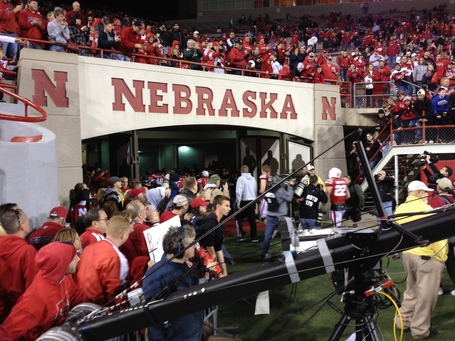 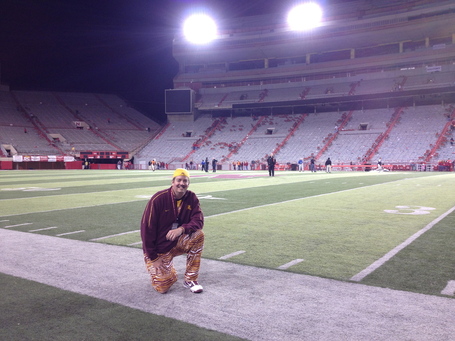 6:45pm: Head back to the hotel to relax before we go out to Barry's to watch the Gophers/Badgers hockey game. 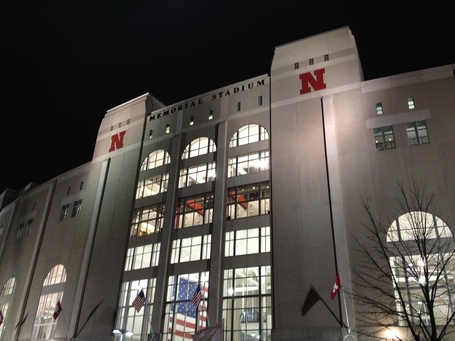 That freeway party? It goes on postgame too. I have a mission in life...to get the City to stop being dumb about tailgating. 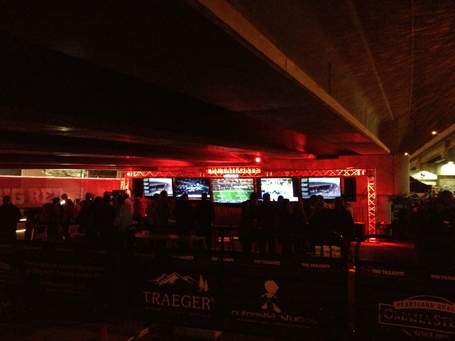 7:07pm: Word of the impending B1G expansion begins to sink in. I get very annoyed with Jim Delaney.

7:55pm: Arrive at Barry's. We order food/drink and I ask the waitress to change one of the TV's over to the hockey game.

8:03: No hockey game. Ask again. Waitress apologizes and says her manager will get it done.

8:07: Still no hockey. Waitress points out the manager to me. When I ask about it he says "Big Ten Network doesn't play hockey." I politely explain that it most certainly does show hockey games. I'm not sure he knows what hockey is, being new to the B1G and all. I convince him I know what I'm taking about and he goes off to change it (or so I was led to believe).

8:12: STILL no hockey. I send my Husker buddy to resolve this. He uses some Husker mind trick to convince them to get the game on. Order has returned and there is once again a balance in the force.

8:13 through 9:44: We flip our attention between hockey and the Oregon/K-State games.

9:45pm: K-State still hasn't rallied against Baylor. I start swearing about a Notre Dame trip to the MNC. The fact that Oregon could find a way to lose has not yet entered my mind as a possibility.

10:14pm: All these Husker fans keep looking at me strangely. I realize that my buddy and I are the only ones facing the hockey game TV and we're yelling very loudly and profanely about Mike Eaves and Ramage. The faces of the Husker fans suggest that they do not know who they people are or why we hate them so much. I don't have the heart to explain to them that there is true evil (outside of Lil' Red) in the world.

10:30 something: Badgers pull their goalie. It becomes clear that this will be a W for the Gophers (what? I had a feeling!) 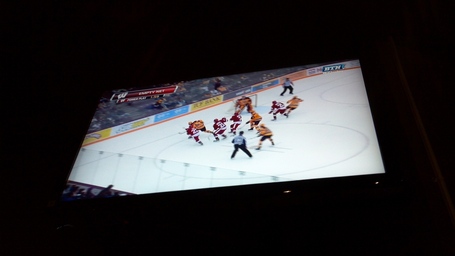 10:36pm: GOPHERS WIN! I celebrate loudly and tell Mike Eaves...well, this is a family blog. I begin to wonder if I have an irrational hatred of Mike Eaves.

10:40 something: K-State loses. I am cranky about Notre Dame.

10:50 something: Oregon loses after their kicker screws up. I swear loudly. A Husker fan is cheering. Either he has money on this game or he is an evil, evil person.

11pm: We call it a night and a successful weekend and head back to the hotel.

8am: We hit the road. I prepare myself for another trip through the heathen lands of Iowa. You might be able to prepare your eyes for the bland nothingness they will be forced to endure, but nothing can prepare you for the smell.