In their 2nd weekend WCHA series, the Gophers came away with a Friday home win and a Saturday road loss.

So, apparently our resident hockey guru had better things to do this weekend than watch the Gophers play. What were they? I have no idea. I'm sure they were frivolous and worthy of mockery totally defensible and fantastic uses of his time. I meanwhile, made the agonizing decision to miss an afternoon of work to assure myself a seat at the Friday night opener against the Minnesota State University - Mankato Screaming Eagles Mavericks. I also made sure to watch most of the Saturday night game on Fox Sports North when I wasn't watching the NSFW offensive orgy (aka: Oregon @ USC) that Gus Johnson was announcing over on Fox. What does this mean for you, our loyal TDG readers? Amateur hockey analysis from someone who still can't give you a complete definition of every penalty he sees called at a game. Though in my defense, my thirst for hockey knowledge continues unabated unlike other disdainful members of our staff (cough...Gopher Nation....cough).

So yea, this is going to be short, semi-sweet, probably not that insightful, and filled out with less than professional photos/videos taken on my smart phone.

- Our defense did not play well for big stretches of the game. Both Mankato goals came on defensive breakdowns that could have easily been avoided, and Adam Wilcox did well to keep more Maverick scoring opportunities out of the net.

- Our freshmen need to stop playing like freshman. Not going to single anyone out here (though I could...oh I so could). The kind of mistakes the young guys were making could prove to be this team's undoing late in the season if they don't clean them up.

- We did a HORRIBLE job controlling the puck for large portions of the night. Passes were often off the mark, we were whiffing on both our shots and on receiving passes, we turned the puck over in our own zone...just sloppy. The exception (for the most part) was our big line of Bjugy, Rau, and Budish, especially when they were paired up with Schmidt and Parenteau.

- The power play came on strong as the game went on. All 3 Gopher goals were scored on the power play. The third goal was especially enjoyable, as the Gophers had kept the pressure on Mankato throughout that PP and Budish's winner really blew the roof off Mariucci.

- Mankato came to play. I don't want the earlier points to take away from that. I'm not the first to note this, but our in-state opponents can always be counted on to bring that extra level of intensity when playing the Gophers because knocking them off is such a sweet bit of victory.

- That said, the Mavericks also brought a cheap, chippy style of play with them. We're not talking UND GOON level, but it was noticeable.

- Not going to lie, we were flipping back to the Oregon game quite a bit so I was not as attentive as I could have been to the Gophers.

- Again, defense seemed lacking far too often. Sloppy and careless handling of the puck (the Mankato winner came off a turnover) were also too noticeable.

- Mankato brought their A game again and MN kept getting down. They fought back at first, but it's not a good way to play when the other team wants the win that badly.

- The Gophers were not as effective on the power play as they were on Friday night. This was especially noticeable in the 3rd.

- The game didn't get as dirty as I thought it might after Rau got laid out at the waning seconds of Friday night on a VERY cheap hit by Eriah Hayes that ended up only being called as Charging.

- The Three Stars for the game were 1) Dylan Margonari, 2) Erik Haula, 3) Josh Nelson

- The Gopher's first goal was this brilliant little move by Erik Haula:

- The new scoreboard, ribbon boards, and sound system are such an improvement over what was there before, though they do need to do a better job with keeping the out of town scores up to date: 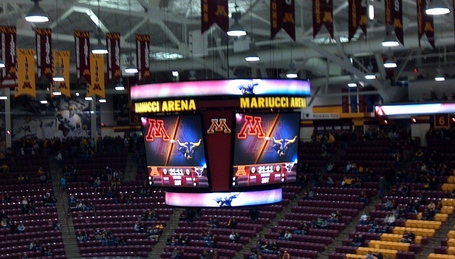 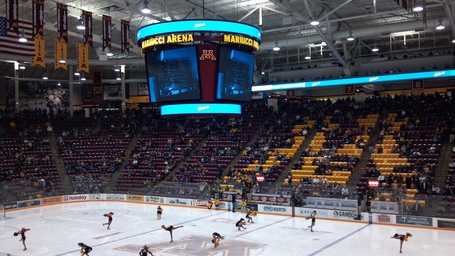 - I really love going to hockey games at Mariucci. The student section/band traditions and cheer are so much fun to watch. There's a level of interaction and involvement between the students and band that is not matched by any of the other sports and if I'd gone to the U I'd have loved being a part of the hockey student section. If you've never been to a game there, I highly recommend you do...if you don't like or understand hockey, just make sure to go to the game with someone who does or introduce yourself to the folks around you. Chances are they will be willing to share a little knowledge with you. To give you a taste of the traditions that I'm talking about, here's a video I took of the band and students during their pregame march around the concourse:

Don't judge it by that pretty lame little clip. They do much cooler stuff than that. I'm just not good at remembering to film things. I meant to get a video of the students singing the old favorite "If you want to drive a bus, go to State" (sung to the tune of "If You're Happy and You Know It")...for those who've not heard it, here are the lyrics. I'm sure you can picture it in your mind:

So yea, be sure to check it out one of these weekends. I know I'll be back again this year.