Well it's no Pasadena, but it's nice to see the Gophers land where they deserved to land instead of being hopped by a team that they beat soundly.

Eventful weekend, no? Here's some delicious Nugz to get your week started off right.

- ALL THE CAR PART STORIES: Reactions to the MCCBoT's selection of the Gophers from the STrib, FSN, ESPN1500, The Daily, and WWL Blog.

- A WEEKEND FULL OF #TAKES: Fuller was on a roll this past weekend, rolling hard with a story to back up his "We're going to Dallas" tweets that he'd been dropping all week. My fave part of this fluffy nonsense was his comparison of Gopher ticket sales to a 2nd straight Insight Bowl in Phoenix (following a second disappointing season ending slump under Brew) to a Pizza Pizza bowl appearance last season by Purdue, which benefited from both a close bowl site and the fact that the Boilers hadn't been to a bowl in four seasons. Exactly the same right?

Marcus decided to follow that up by picking the obvious and irrelevant #TAKE on the MCCBoT matchup with TTech, namely that this is the team who Mason choked to. Which is totally relevant since Mason is still our coa...since Kill's teams have a history of epic collaps...since it's hard coming up with actual things to right about. Did you know that this was the game that defined the ENTIRE Gophers program? I did not. Also, did you know that beating TTech will somehow exorcise some demons? Even though TTech is coached by a whole new staff, runs a new offense, and isn't the same program that beat us? And even though none of the players on our current team have anything to avenge since they were still in high school when it happened?

- Now that my ragging on Marcus for those pointless (and not well thought out) stories is done, time to give him some praise for highlighting something that does matter. In this case, the impact that having a hands on AD with a strong lobbying/sales skillset has on improving things for the program. In this instance, that means working the MCCBoT officials hard to select the Gophers.

"A lot of very powerful alumni wrote our board," Houston said on a conference call. "I think it really made a difference. It feels really good to welcome a team here that wants to be here and feels good about coming to your market. I think it definitely helped to sway our board of directors."

Also, hats off to everyone who went to the UNLV game. Your trip helped sell the Gophers.

Teague said it also helped that the Gophers traveled well for their Aug. 30 season opener at UNLV.

"We maybe had five, six or seven thousand people down there," he said. "That impressed them because they want people to come to the bowls. So we used UNLV as a sales pitch."

- Coach Kill and Gophers players talk about the bowl berth:

- Gopher Sports also has a new hype video up for the game:

- The STrib editorial board bucks the work of some of their columnists to deliver a more nuanced take on Coach Kill's seizures.

- Dr. Saturday ranks all 35 bowl games. MCCBoT is low on the list. Not much to quibble with there.

- Shama says that recruiting LB's is a priority for this class.

- The locker room at the FB practice facility is undergoing a renovation. Here's a look at the new lockers that will be installed. Note the iPad.

- Amelia wonders if the Gophers can be a top 3 team in the B1G.

- Wally Ellenson is recovering nicely from his injury. Apparently the decision to redshirt him or not is not totally final yet. My hope is that they'll keep it on. No reason not to given the way the team is playing, IMO.

- A pair of stories on Elliott Eliason, who has been a pleasant surprise with his strong play. Marcus looks at how EE is always striving to get better and Amelia looks at the positive impact his offensive production can have.

- The marketing folks in the athletic department continue to come up with some good stuff. Here's a series of web spots they've put out to sell the men's basketball student section:

- In case you missed it, Bjugy got drilled with a cheap shot on Saturday night. Take a look:

SWEET 16 BOUND! The volleyball team is going back to the round of 16, following wins over Liberty and Creighton. They now face off against Purdue in the regional hosted in West Lafayette.

- The regional also includes Penn State and Kentucky. I've been chatting with some of the Hammer & Rails guys and we might try to put together a Q&A about the regional to better inform folks about the teams. That includes me, as I am by no means a Gophers VB expert.

- Big weekend for the other set of Gopher rinkrats, as they continued their dominating performances in a sweep of Wisconsin. The sweep extends their NCAA record win streak (now at 26 in a row). Saturday's game at Ridder also set the single game attendance record for the building. Despite both feats, the team is winning in relative obscurity.

- Tough week for the women's bball team, as they lost 2 tough non-con games.

- The #1 ranked Gophers lost their first dual of the season to #3 Oklahoma State.

- Scoggins takes a look at J Robinson's unique tenure at the U.

- So, Nebraska got napalmed by Wisconsin. Just an UGLY performance. Which is too bad, b/c that means this insane run by Taylor Martinez may go ignored.

- Comcast in MN comes though for SCSU and MSU-M, as 18 of their games will be broadcast.

- Tonka defenseman Tommy Vannelli commited to the U over the weekend.

- CFB realignment explained in one image. 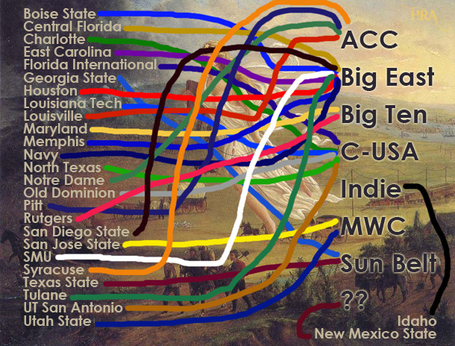 - Ever wonder what it looks like when a RB pulls his hammy while scoring a touchdown? Baylor's Lance Seastrunk demonstrates.

- Before they screwed up the end of the game, Georgia pulled off this nice fake punt.

- UCF needs to learn how to properly down a punt:

- BC coach Jerry York tied the NCAA record for all time coaching wins over the weekend.

- The current neutral site format of the NCAA hockey tournament sucks. It looks like some in the NCAA are willing to admit that. Hope lives! (Kinda)

- Best fan GIF of the weekend? Stanford fan excited about the Rose Bowl. 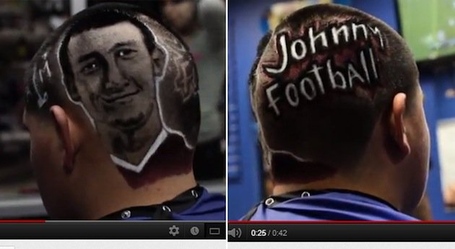