On this Day of Love, I'd Like to Ask One Question?

It is a simple question and I'm sure you know the answer to it. 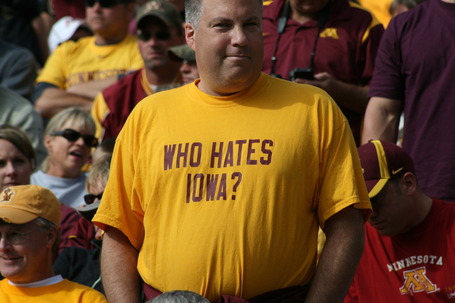 We hate Iowa, of course.

This is more than just an opportunity to take a cheap shot at Iowa. Because as I was getting some material ready for the Gophers vs. Ohio State game today I realized how much different our basketball season would be looking had we not been swept by Iowa. So to be honest, this episode of hate is really a compliment to the gritty Hawkeye basketball team.

But with all due respect to Fran McCaffery and his Hawkeye squad, there is just no way we should have lost twice to one of the worst teams in the conference. It is less about the sheer fact that we lost but we were out-played, out-coached and out-hustled and it was embarrassing. It adds to the hate.

The simple fact is if the Gophers were currently sitting at 19-6 (7-5) right now, we would be a lock for the NCAA Tournament. I believe that the Gophers have played very well and overachieved in the wake of Mbakwe's injury with the exception of two games. Iowa at home and Iowa on the road. Watching the Gophers be unable to get a decent shot in the last few minutes while Iowa would execute an offensive set to get lay-ups and dunks when it mattered most was infuriating.

Hats off to Iowa for beating the Gophers twice. We didn't lose because we were looking past, we lost because we were beaten. At least we have this (though I might be willing to trade it for two more basketball wins...not really) 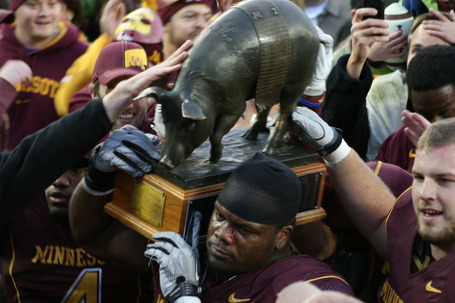 I hate Iowa, but I LOVE Floyd.