Can the Gophers Make a Dramatic Run in the Big Ten Tournament?

Share All sharing options for: Can the Gophers Make a Dramatic Run in the Big Ten Tournament?

No, but lets talk about it anyway.

The Gophers open the Big Ten Tournament with the team they seemingly always open the tournament against. Northwestern and Minnesota met in the first round of the first Big Ten Tournament in 1998 and they have met three of the last four years in the first round. Overall this will be the sixth BTT match-up between these two teams with Minnesota holding a 3-2 advantage. While you can often learn valuable lessons from the past, those previous games are meaningless.

The question is can the Gophers beat the Wildcats THIS year? The two teams split after each dominated the other on their respective home courts. Minnesota was +23 at The Barn and Northwestern exacted revenge by winning by 11 in Evanston (though the game was not as close as the 11 point margin may indicate). Northwestern is a very good three-point shooting team that plays a unique and pesky 1-3-1 zone and they are at TERRIBLE rebounding team. Minnesota is inconsistent from game to game, they turn the ball over a lot and they really struggle in the final 5 minutes of ballgames.

With that said I think the Gophers win this game. My theory with any Northwestern match-up is if we have enough time to prepare for them we win. If we only get a couple days between games in the middle of January of February, we struggle defending their offense and not turning the ball over against the 1-3-1. Fortunately we have had four full days to prepare. I also believe (this is the one that could really make me look bad) that Ralph Sampson will be engaged for a game and Northwestern's interior is vulnerable. If Ralph can find holes in their zone, or if we can bust them out of the zone into man, I think he can really go to work in the post. When NU is in their 1-3-1 there will be opportunities to get Rodney loose along the baseline assuming we stop with the soft, cross-court passes that get picked for dunks. There is ample film on those turnovers, don't let it happen again.

I like this match-up and I believe Minnesota can and will win. Do whatever you can to bottle up Shurna and make the rest of their team beat you. Maybe we'll meet again in the NIT.

Up next would be Michigan. The tri-champs of the conference are probably the one team we'd most like to play of the top four seeds. They are a nice, balanced team that shoots the ball very well. Minnesota defended Michigan's shooting very well the one time these two teams met but Trey Burke coming off the pick-n-roll was poorly defended and he had his way with the Gopher defense. We are much better at defending the pick-n-roll and I do not fear this (as much).

The Gophers can beat Michigan but I think it would ultimately have to be because the Wolverine's shoot poorly and considering they haven't seen us since early January we might get big games out of Joe Coleman and Andre Hollins. There is a reason that Michigan tied for the conference title and the Gophers are the 10 seed. They are a good team who will beat Minnesota more often than not. BUT they are not unbeatable and when the Gophers are playing with some passion they can compete with a team like the Wolverines. I'm not calling a win in game two, but like I said it is the preferred match-up of the top four seeded teams.

I'll stop before the semi-finals. If we can go 2-0, I'll preview and predict the final two games with more optimism than I can muster right now. 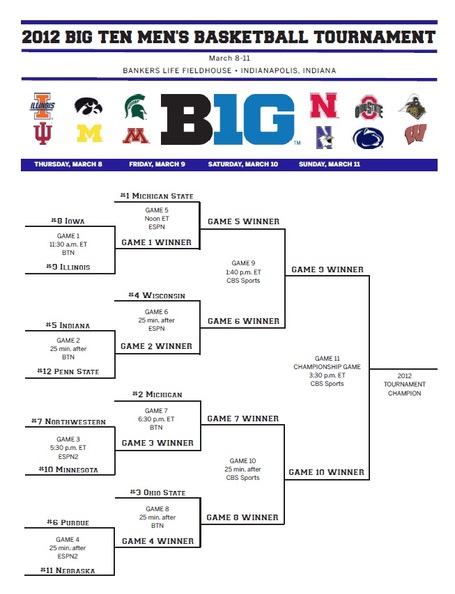