Gone are three graduating seniors who combined for 80 starts. Chris Bunders, Ryan Wynn and Ryan Orton were valuable members along what was an improved offensive line last year.

Bunders and Wynn are really the guys lost. Orton had 14 career starts but only 4 last year in a season where injuries and shuffling of players along the line didn't result in more starts for the senior.

Bunders has started every game along the line for three years. He really emerged last year to help solidify the line when Jimmy Gjere was lost to injury and Bunders had to move out to RT. His presence and leadership will be missed this year. Wynn also has a lot of starts in his Gopher career. After starting all 13 games as a freshman his lost his next two due to a back injury before starting all 12 games at center as a senior. He too was a stabilizing force along the line and will not be easily replaced. 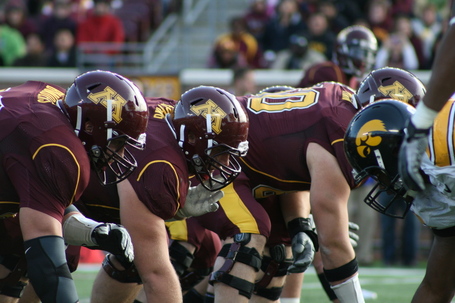 Overall last year's group was one that really improved throughout the season. Bunders earned honorable mention All-Big Ten for his efforts. Walk-on, Caleb Bak was a surprise in the last four games and overall this unit overcame a ton of injuries while still performing well. In the final two games of the year the 2011 offensive line helped the Gopher ground game to over 240 yards in both games, including a 116 yard performance by Duane Bennett. The yards per game on the ground improved from 2010 and sacks went up a little bit.

The good news is that the Gophers are returning a number of highly regarded kids, most of whom have some good experience under their belts. They also will have the benefit of a second year of being in the same system with the same coaches. Unfortunately this has been a rarity for Gopher players over the last several seasons. But the question looming is will this unit be an upgrade over last year's unit?

This is my guess at the 2012 starting lineup set next to what was probably the ideal starting line from last year.

LT - Ed Olson is entering his junior season with 18 starts already under his belt. He started eight games as a true freshman and started 10 games last year. After spending the last two seasons as one of the young and promising linemen in the stable, it is time for Olson to step up and be the anchor along the line. Behind Olson will be Marek Lenkiewicz who started 2 games last year at LT as a redshirt freshman. I will grant this position as an upgrade due to a year of seasoning, strength training and maturation.

LG - next to Ed will once again be his brother Tommy who will likely be starting week 1 as a true sophomore. Tommy brings some toughness and nastiness to the offensive line. He started 3 games last year and participated in 11 of the 12. T. Olson is physically very mature and it would be a lot of fun to see these brothers locking down Gray's blindside and paving massive lanes for our running backs. Caleb Bak is a walk-on sophomore who was thrust into the starting lineup last year for the final four games. Bak exceeded expectations and probably worked his way into the 2-deep to begin the season. This too should be an upgrade just due to being a year older, stronger and hopefully healthier.

C - Zac Epping is a sophomore who started 8 games in 2011. This starting spot could end up going to Zach Mottla, but for now I'm going to go with Epping as the starter. Maybe I should be rooting for Mottla to get the start so we can see a line with all five starters from Minnesota. But I'm just fine with a Wisconsin native starting at center for the next few years too. This position has to be considered a downgrade until proven otherwise. Ryan Wynn wasn't an All Big Ten center but he had a good senior season and is being replaced by a sophomore.

RG - Josh Campion, like T. Olson, is a physically mature kid who will bring some toughness to the line. The redshirt freshman graduated high school in 2010, played at a prep school that fall, redshirted in 2011 and is now a 21 1/2 year old freshman. I am really looking forward to a healthy and strong Campion at RG for 13 games this fall. Behind Campion I am expecting one of the redshirt freshmen to make the 2-deep. Joe Bjorklund is my best guess but it could also be one of the McAvoy twins. I would give this position a neutral rating. Bunders began the year at RG but really thrived after he moved to tackle, so RG was never a real strength of the 2011 line and I expect Campion to perform at least to the level we saw last year at this position.

RT - Jimmy Gjere is the big question mark heading into the season. The stud tackle out of Irondale was learning his craft last fall when a concussion issue ended his season after starting 5 games. No definitive word on his readiness to go full speed when camp opens in a couple weeks. If Gjere is unable to start then this spot will be a battle between Lenkiewicz and Foster Bush. A healthy Gjere, a maturing Gjere, a stronger Gjere is a better Gjere. But until I know that he is healthy and stronger I will give this a downgrade due to the outstanding season Chris Bunders had in 2011.

I would really like to see this unit help pave the way for a Gopher running back (or two) to be a factor. MarQueis Gray is going to gain a lot of yards on the ground but it would be nice to be able to save his legs some by creating some room for the running backs. I expect that we will give up around 20 sacks on the year again (22 last year, 17 in 2010), but improving the ground game would help this offense out immensely.

Overall the 10+ guys who may see playing time in 2012 are all going to be underclassmen. Not one senior along the line and only two juniors. This is a developing line and it really could be a strength down the road. I believe this unit as a whole will be better than it was a year ago. This is mostly due to the belief that after having a full season and then another season of conditioning/strength training and then spring ball and then another fall camp with the same coaching staff is going to pay huge dividends at certain positions. Offensive line is going to be one of them.