7 days everyone. Only 1 more week until football! This is going to be a long week. Thankfully the news outlets have stepped up their coverage of the Gophers again. So let's hop into the Nugz.

- Fuller turns his attention to the offensive line where all positions seem to be determined except for the starting center:

Entering this week, the University of Minnesota had settled only on its two starting tackles, Ed Olson and Josh Campion. But offensive coordinator Matt Limegrover said Wednesday, Aug. 22, that Olson's younger brother, Tommy, and Zac Epping had won the guard positions.

The last spot on the line is between centers Zach Mottla and Jon Christenson.

This is a tad unsettling, as the center spot is kind of important and all. But the rest of the line looks good. Here's to no injuries across the line all season!

- Miller profiles the potential center of the future, Brian Bobek. Bobek spent his summer busting his butt in the weightroom with his father in order to prepare himself for when he can join the Gophers:

Bigger, too, which may come as a shock in Columbus. According to the Columbus Dispatch, new Buckeyes coach Urban Meyer believed that a 270-pound center wasn't big enough for his offense. But Bobek has put on more than 15 pounds this summer, can bench press 480 pounds, and believes he will report to Minnesota for fall semester at 290 pounds, at least.

I'm looking forward to seeing him play in the years to come.

Go below the jump for more Gopher football profiles, links, and assorted media as well as some insane new CFB football facilities, bobblehead GIFS, and a corn maze only a pirate could love...

- FBT also takes a look at the announcement about the O-Line starters. He also offers us his depth chart.

- The profiles continue as FSN digs into the interesting past of Cedric Thompson:

Thompson grew up in Compton, Calif., a city notorious for high crime rates. While Thompson was living there, his 16-year-old cousin was killed in a gang-related shooting. After that, Thompson's mother told him to pack his bags and live with his father in Bombay Beach, nearly three hours east of Los Angeles. The tiny town is nestled on the shore of the Salton Sea, one of the largest inland seas in the world, and has the lowest elevation of any city in the United States at 233 feet below sea level.

His story is really interesting. He is even part of a documentary that looks at the efforts of 3 town residents to make it in life. You've got to be rooting for this kid to do great things.

- Next is Nate Sandell's look at what has changed for Michael Carter since he got to the U:

The disinterest and lack of continuity that had haunted Carter's play was noticeably diminished in spring practice. During the team's winter break, he worked out with Tyrone, who retired in 2011 after 11 years in the NFL, and it showed in his conditioning. His grasp of the playbook appeared to be elevated and rarely did he allow himself to be blatantly overmatched or outworked by a receiver.

"When we hit the spring, that's when we looked at it and said, 'OK, let's see. He's got a shot. This is his last shot. What's he going to do with it?'" defensive backs coach Jay Sawvel. "From the first spring practice to the 15th spring practice he strung together a very consistent, good-level of play. We got to the end of spring and felt really good about him going into the summer."

That confidence in Carter showed on the depth chart as he was pegged as one of the Gophers' starting cornerbacks entering fall camp.

All signs point to Carter having made big strides. When folks ask why I think taking Seantrel Henderson would be a good idea (speaking hypothetically since he isn't going to transfer) Carter's turnaround is a big reason why. I think Coach Kill's style will work well for players with issues who are willing to make a change. This is the same theme that was hit upon in a preview of McDonald that was published by Phil Miller earlier in the fall. Will Kill's tough love result in more wins? I don't know. But it certainly seems to work in getting players to perform at a higher level without the nonsense if they are willing to put in the work.

- Gopher Sports brings us their profile of Mike Rallis.

- FSN also looks at how the Gopher defense will be emphasizing getting to the QB. The defense feels that they left plenty of opportunities on the field last year:

But there were many other sacks the Gophers didn't complete in 2011, and that's been a focus during the fall camp in 2012.

"We're more concentrated on finishing plays and not missing those sacks," said Gophers defensive coordinator Tracy Claeys. "The pressure was fine a year ago. We didn't finish about 18 sacks we missed after watching the film. If we make those sacks, we'd be up toward the top of the Big Ten and we'd have gotten off the field a hell of a lot more, too."

- Shama speaks with Max Shortell, who says he feels much more confident and ready to back up Q if needed.

- The ticket office is now marketing single game seats for UNH and WMU as a "Meal Deal" package. $25 gets you a ticket, a pop, and a hot dog. Check below for a poll about this.

- Video of the Gophers bonding at Dave & Busters from Gopher Gridiron.

- More media, with pictures from Practice #21 and audio from both Coach Kill (on final rosters) and Coach Limegrover (on skill players and talented freshmen).

- Sticking with more audio, Tom Pelissero from ESPN 1500 interviews Coach Limegrover on what we can expect to see from the Gophers offense this season (look for the interview a little down the page on the right side).

- The Gopher FB team room I linked to a few times was the lead story on Yahoo for a while.

- A few UNLV links to share today. The big news? UNLV named their starting QB, RS frosh Nick Sherry. The Rebels return all five starters on the O-Line. As you may have heard, UNLV football is a work in progress.

- The WWL blog ranks the B1G teams in order of how favorable their byes are. The Gophers come in at #9.

- This is a long read, but if you are into the intricacies of football playcalling then I highly recommend it. It's a Grantland piece on the rise of offenses who run "packaged" plays. Basically it takes a look at offenses who have the QB make reads AFTER the snap, which can allow the offense to run the same play over and over while executing different options each time.

Using a no-huddle approach, Oklahoma State often called the same, simple play repeatedly as they marched up and down the field, with Weeden as point guard for their dynamic attack. The basis was simple: "It's all runs or throws on the perimeter, all built into one," explained Oklahoma State's offensive coordinator, Todd Monken.

Seriously, a good read if you're into that sort of thing.

- Frank the Tank offers a defense of Notre Dame. Specifically, he offers up some pretty well reasoned points about why ND football isn't spoiled or benefiting from unfair rules like folks always assume. I'm betting he had to shower afterwards. Also, ND still sucks. He did have this classic line about the new ND uniforms (which he despises):

This is what happens when Ed Hardy and a leprechaun have a love child.

- CBS Sports asks "Where were you when Appalachian State beat Michigan?" I was lucky enough to be in Columbus, OH to watch the Youngstown State/OSU game at The Shoe. Not lucky b/c of that game (which was a snoozer) but because I was able to watch Michigan choke to Appy State at Heinygate surrounded by thousands of Buckeye fans drunk on cheap beer and the sweet taste of Wolverine schadenfreude.

- The Bylaw Blog thinks Oregon might be next in line for some harse NCAA penalties over that recruiting scout who got paid lots of $$$ for BS reports.

- The new Michigan State scoreboard is huge. Remember when the Gophers had the #3 largest board in the country? Pretty soon they won't be top 10.

- Michigan's historic Yost Area is getting a reno/facelift and the gallery I'm linking too shows off what is changing. I'm excited to watch Gopher hockey here in the future. I'm especially interested in how the renovation turns out b/c it will get me thinking about the possibilities of renovating The Barn.

- The rich get richer. USC opened a new athletics center and it is SICK. Just...go take a look at these photos. Simply insane. Here is a video tour:

When it's time to improve the Gophers facilities we can only hope they get something 1/10th as nice.

- More photos of Oregon's new unis. They are quite tame by Oregon standards and I like what I see thus far.

- Oklahoma needs help. A 5 year old kid was forced to turn his Michigan tshirt inside out because of a school dress code designed to stop kids from wearing Texas gear (and possibly also to halt the wearing of gang colors). Common sense was not applied. Michigan AD David Brandon has invited the kid to attend a Michigan football game. Good on him.

- Bobbleheads + GIFS. Of course I'll link to it. They have a Favre one who cries and has his jersey change color:

- Speaking of things involving the Packers...Deadspin has a deliciously profane take on why the Packers suck. One reason?

Packers fans are the Trekkies of the NFL. Fat. Slovenly. Unjustifiably arrogant. When you celebrate the Packers, you're celebrating a group of people who never had the intellect or courage to leave Green Bay and actually go DO something with their lives. 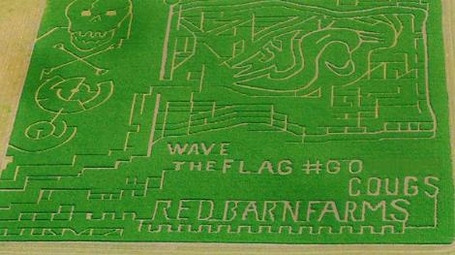