Only 2 more days! It can't be healthy to need a hit of CFB this badly. Right to the Nugz!

- Fuller has been on a roll lately. First he put together that great look at Q, his family, and how he's handling his responsibilities and now he's followed that with a look at the changes Keanon Cooper has undergone. He adds depth to a theme we've all heard many times since April, that Coop has stepped up big as a team leader since GT passed. As it turns out, he offered that leadership in smaller ways in the past too:

But Troy Stoudermire knows this has affected Cooper a lot more than he shows. The Gopher seniors have been friends since they were 7 years old in Dallas.

"It's still hard for him right now," Stoudermire said. "It changed him. You can definitely see it. He's a person that's living every day to the fullest. You know that Keanon is always going to do the right things. He's going to guide you in the right direction."

He did before April 6, too -- just more privately than publicly. Stoudermire says Cooper helped him stay on top of his academics through the years. Every day, Cooper would ask if Stoudermire had finished his homework. It started when the two of them roomed together as freshmen. Now Stoudermire has a degree.

Coop also revealed some details about what he hopes to do after his football days at Minnesota are done. The NFL is his dream of course, but he has plans that go beyond football:

Cooper, a two-time Academic All-Big Ten selection, was the first person in his family to get a degree, receiving a bachelor's in sports management.

Eventually, Cooper would like to finish his master's in kinesiology and serve as a Gophers graduate assistant. His dream job would be as both a high school football coach and athletic director -- so he can reach kids at a "pivotal point" in their lives.

"I knew a lot of kids who were very talented, but didn't have the right guidance or mentorship," Cooper said. "Had they been around the right kind of people, they might have done something special with their lives. That's what I want to give other kids opportunities to do."

Like I said, a really nice profile. Coop has been through a lot and I hope this season finishes on a great note for him.

Plenty more football links, a look at the U's football marketing campaign, and a giant water-balloon fight below the jump...

- Are you still in need of something to get you excited for Thursday's game?

- Miller offers more confirmation of a plan to go with a committee rotation for running backs. That shouldn't be a huge shock given the recent reports, but I'm still not sold on it. Hopefully one guy establishes himself early. That guy likely won't be David Cobb, who may have had trouble proving his blocking skills. Phil also notes that the team will be kept busy and far away from The Strip during their time in Vegas. Seems like a reasonable idea.

- The Gophers coaches are working to prep the players for the new helmet rules:

Every so often, when all attention was on the finish of a play being run, Matt Limegrover would shout a surprise announcement: "Ed Olson's helmet just came off!" Limegrover said he would yell. Or, "MarQueis Gray just lost his helmet!"

The idea is to make sure the players are always prepared to sub in and out if a guy loses his hat. Not a bad idea and an attention to detail that does not seem all that odd when you consider how this coaching staff works.

- Sandell's latest hits on an obvious but important point...As goes the non-conference schedule, so goes the Gophers' chances for a bowl game. He also notes that the Gophers are the only FBS program to open the season on the road for 4 straight seasons. Oddly enough, this displeases Coach Kill a great deal. Something tells me that Teague doesn't negotiate new contracts that give the State Fair any kind of priority over the Gophers.

- Down With Goldy has a UNLV preview, Tre style.

- FBT delivers a statsy prediction of the Gophers/UNLV game using fancy computer models that he has built. In typical MV form he also rates the game by comparing it to a type of booze. Solid work all around.

- MV is apparently a close personal friend of Sid, as he is quoted in his most recent column.

- Fuller hopes that the Gophers will be able to give Max Shortell some looks. No, this isn't more #QBGAZE writing. He's hoping that the Gophers are good enough to blow open a lead and get Max some more experience.

- Speaking of QB's, MarQueis Gray does not intend to cramp up. Seriously...check out this photo off his Twitter feed.

- Gopher Sports has a post up chock full of facts and links to even more details about the UNLV game. What sort of details? How about game notes PDFs for both Minnesota and UNLV.

- Phil takes a look at how young "veteran" WR's like Jones and DCT are mentoring the talented freshmen.

- FSN feels the Gophers have the upper hand on UNLV. They also note how the Gophers hope that their athletes will become playmakers.

- WCCO says the Gophers are simplifying their offense to improve their success.

- Adam Hoge from CBS Chicago offers his preview of the Gophers.

- UM News has their Gophers preview.

- In case you missed it, RandBall heard the news of Tim Brewster's new job and came up with this hard hitting investigative piece on how Brew's hot chili will play in Starkville:

RandBall: This is going to sound really off the wall. But I do a sports blog here, and former Minnesota football coach Tim Brewster was just hired as wide receivers coach at Mississippi State. He was known for a ton of expressions. One of them was "get your chili hot." ... Would you be able to help me out?

Jay from Chili's: Sure.

JFC: It's just one kind. Regular chili. It's not very hot.

RandBall also took a deep look at what he would need to bring in order to get some:

RB: The ribs sound like they might be expensive. If I'm going to get some, I'd better bring some. How much money do I need?

- By bringing associate AD Mike Ellis to Minnesota with him, Norwood Teague might also have given the U the chance to take over the Villa 7 conference. From what I've read, this is a pretty high profile networking event put on in conjunction with Nike and holding it would offer the U nothing but benefits. What is not clear is if this would be an additional basketball Villa 7 event with VCU keeping their current one, if this would replace VCU's event, or if this would be a brand new event for a different sport (read: football).

- You've probably seen the U's "Be There" campaign for football ticket sales. I posted the "When Pigs Fly" TV ad from the campaign in the Nugz a few weeks back. After running that poorly sourced/reasoned student ticket pience the STrib had Phil Miller pen a nicer look into the ideas and people behind the campaign. I still don't think the U has brought their full "A game" yet, but I do like that they are making a concerted effort to improve ticket sales. Gopher Sports is participating by highlighting actual Gopher fans and why they'll "Be There." First up is The Doepner Family. More profiles will follow in the coming weeks. The Rochester Post Bulletin also took a look at a local grad who is now working for Aspire in selling Gophers tickets.

- This is a Michigan link about attempts to improve their student football attendance, but I think it is a great example of two things that relate to our struggles at Minnesota. First, it offers up what on it's face seems like a good idea to improve student attendance. But given that this is an MGoBlog link, the takedown of why this idea is also a failure should highlight why there is not a silver bullet solution (other than winning) that the U can bank on. In the end, what I hope to see from the U is more creative attempts to make both the student and regular season ticket attendance better. Many of these may fail, but failing to try new things would be even worse.

- PSU has released a new hype video for the upcoming football season. Given the mess they're facing, I think it strikes the right tone.

- Speaking of Penn State..."Sweet Caroline" will no longer be played at football games. There were rumors that it was because of the "touching me, touching you" line but the school claims that isn't the case.

- The STrib offers up their team by team look at the B1G Legends division.

- The Big Ten Football Dude offers his Week 1 game predictions for the B1G. He sees a 31-17 Gophers victory.

- Tom Dienhart offers up his preseason B1G bowl predictions. He has the Gophers dining on pizza in Detroit.

- The Saturday Blitz offered up some B1G predictions for the season, including one that has Gray moving up the draft boards by getting the Gophers to a bowl game.

- Does AIRBHG exist? A point/counterpoint.

- Ohio State is starting a new "quick cals" tradition that seems like it could be pretty cool. Well, cool with a full student section that is.

- The Sunday Morning Quarterback blog is back and it's on SB Nation! I'm not sure if others were fans of the blog back before Matt Hinton jumped to Yahoo in 2008, but it was one that I always liked.

- Phil Steele takes another look at the toughest schedules in the country. Based on his new metrics, the Gophers have the 22nd toughest schedule in the nation. His thought process on this is kind of interesting...worth a look.

- UniWatch ranks all of the "Big 4" pro sports uniforms. They do not think highly of the Vikings. 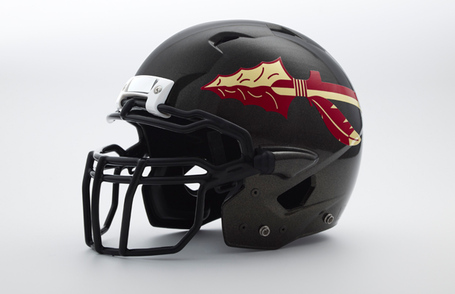 - UNLV will also be sporting new helmets this season.

- These were in the Top 25 list from above, but Wyoming's new camo unis are pretty slick.

- BTN takes a look at the summer workouts uniforms across the B1G.

- Long Beach State has a new basketball court. Oregon should take a look at what a good "tree court" looks like.

- A story that combines food AND college football? Perfect for The Smorgasbord. Sadly, this isn't an fully appetizing link. The University of Louisiana has partnered with Sonic to offer a burger bun with the Ragin' Cajun logo on it. I'm...not totally sold on this idea. I actually wonder how many people will try to peel it off thinking it's a sticker.

- Awesome video out of Emporia State. The coaching staff felt their team was getting run down by the daily grind of camp and decided to liven things up. How? By staging a massive, surprise water balloon fight:

- FSN offered up a Top 10 tweets for last week. Coming in at #1? The Gophers' own Twitter savant Brock Vereen.

- Do you feel that your retinas are in need of a good scarring? Then check out this unholy mashup that Fox Sports did of Skip Baylis and Kim Kardashian.

- I fear for the human race.