It's Kind of a B1G Deal - Predicting Every Team's Season

Share All sharing options for: It's Kind of a B1G Deal - Predicting Every Team's Season

1 MORE DAY YOU GUYS! Well, to be exact there are 37 hrs 6 mins left as of when this was posted, but still. I'm so excited I've decided to open this post with a Happy College Football Season haiku:

When he shoots a gun

Ok, enough of that for now. I made the foolish decision to predict the season of every team in the B1G. Somehow I thought that this would be quick and easy. I was wrong...Suddenly I got all worried that I should be extra careful lest I be mocked for my horrible picks. I over-thought things for a while before I realized I was really hungry and that making food and consuming beer sounded much tastier than being right did. So if some of these picks suck I blame the tasty brats and Surly Furious that were calling to me from my fridge.

In addition to predicting the regular season of each B1G team, I've also predicted the B1G title game and the bowl placement of every eligible team. I am sticking by my personal rule to ignore the dumb division names. Darth Delaney can deal with it. A reminder, anyone who places bets using this information is a fool and should be mocked Nelson Muntz style. Lastly, don't forget to tell me how idiotic these predictions are in the comments.

Final standings, B1G title game outcome, and bowl projections are all below the jump... 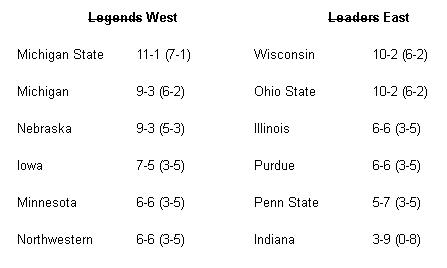 So now that I've thrown out my predictions, what do you think? What would you change?