Greetings fellow Gopher and College Football fans! Today is a glorious day. Some might say the most glorious day of the year. A day of excitement and anticipation. A day where hope can spring eternal. A day where much beer and grilled meat product will be consumed. The premier national pastime is upon us. The Gophers beat UNLV tonight. Let us rejoice! #VivaLasGophers!

Sadly, it appears as though too much of the country is populated by fools: 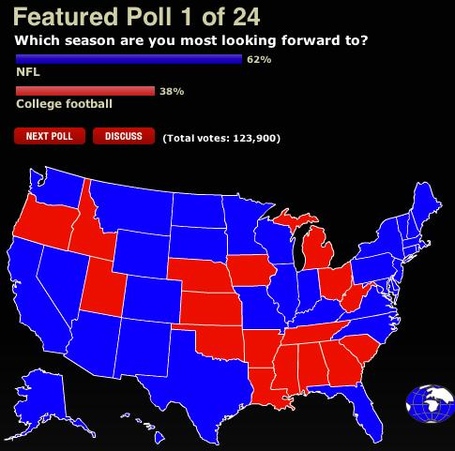 This is just wrong. #FAILPARADE.

I will be golfing instead of working today (yes, that is me bragging). Are you working today? What are you doing? Are you mad? Stop right now. You sound horrible and look like you have a fever. It could be Ebola. You're not a special fancy CDC disease doctor, you don't know. Don't be that guy who gets the whole office sick and/or dead. The only responsible thing to do is call in sick/go home early. As a barely trained sports blogger, I'm going to prescribe a extra large dose of pre-game preparation for the Gophers and every other game that's on tonight. You can thank me later.

There's a decent slate of games tonight, including South Carolina @ Vandy and Wazzu @ BYU (THE PIRATE RETURNS! ARGHHHHHHHHH!). Go here for a full rundown of tonight's festivities including kickoff time in CST and channels (should be updated to reflect games postponed due to Hurricane Isaac).

The main event is of course Gophers @ UNLV. Where we will finally get to see these in action:

'Bout time. Lots of Nugz to run through, so lets get to it.

- Gophers fans are excited to go to UNLV. In other news, casinos and strippers are happy to take all of their money.

- Phil Miller's latest video talks about what to expect from tonight's game.

- Fuller puts together a long article on Kill's track record with building programs starting with Year 2 and how the current Gophers squad looks from that view. It probably isn't anything that well read TDG folks will find too surprising, but it should make for a nice read for the common fan.

- Sandell puts together a thorough preview full of good nuggets like the fact that the Gophers have no major injuries to report prior to UNLV. He calls it for the Gophers.

- Paul Myerberg of Pre-Snap Read is very bullish on the Gophers. He predicts that the Gophers will (in the words of FBT) "shive" UNLV.

- Shama talks to Troy Stoudermire, who says the Gophers need to make a statement.

- Minnesota isn't the only one who needs to make a statement though. Apparently tonight's game is a big one for UNLV coach Bobby Hauck too. Like, everyone says so. Who you ask? Fuller for one. And this guy at a glitzy Nevada paper for another. It's put up or shut up time I guess. Though Bobby Hauck seems to disagree:

Q: What would a win against the Gophers do for the program?
A: It’s a win if we can get it done. I don’t tend to put too much weight on any game more than another one. We get to play 13 of them this year and they’re all important.

Hooray for Coachspeak! There's plenty of that throughout the rest of the interview too.

- While Hauck may not give away many details, it sounds like UNLV is high on their defensive ends. That's important, as they'll be key in trying to hold Gray under control. The ends fit the wider theme for UNLV though...youth and inexperience:

This time, however, maybe the Rebels have the defensive ends to prevent Gray from doing what Kaepernick and Jefferson did against them.

Those four players, however, have zero combined starts at end. Brence did start at fullback in three games in 2010.

- Keeping with the theme, the Las Vegas Review-Journal looks at the 2 programs and sees similarities in how both head coaches are trying to build them up.

- FBT takes a look at 2 key matchups to watch in tonight's game. Lots of great detail in his breakdowns. Also, it looks like MV has decided to add informative teaching YouTubes to his posts.

- Gopher Sports releases the first "Know Thy Opponent" segment of the season.

- Still not sure what you might see from UNLV tonight? SB Nation's statsy football guy Bill Connelly had this preview of UNLV earlier in the year. Worth a look!

- CBS Minnesota looks at the defense.

- FBT also ponders what unknowns might affect how this season turns out for the Gophers.

- Norwood Teague rumored movements caused a stir yesterday. A little birdie told Shooter that Teague and local rich guy T. Denny Sanford were seen traveling to tour the Nebraska practice facilities. This fits right in with what Teague said to the Rochester Post Bulletin about how he builds fundraising relationships:

The majority of fundraising is building relationships. Developing those relationships is the first thing. But yes, we've begun. Have I asked for money yet? No, you don't do that right away. You've got to put your vision in place and then sell to the people who you already have relationships with.

As FBT notes, this would certainly seem to be a vision building trip. Video of Teague's Rochester trip.

- KFAN had a big Gopher segment out at the fair, including player interviews and a segment with FBT.

- WWL Blog lists Hageman as one of 5 defensive linemen who have the most to prove.

- Fuller talks about consistency in our schemes. Hint, it's important.

- CBS Sports previews tonight's game and picks the Gophers by 3.

- Gopher Gridiron put up a final set of pictures from Practice #26. 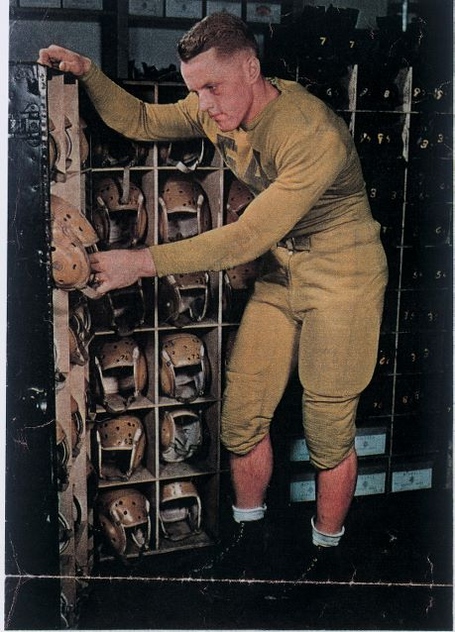 - An Iowa fan visits a happy Floyd of Rosedale at the Minnesota State Fair. He spills delicious tears because Floyd is free from the clutches of the devious Hogeyes. (h/t to Marshmoose)

- The Gophers basketball schedule should FINALLY be out tomorrow.

- Meet the student who leads the Pride of Minnesota every week, drum major Brandon Folkes. Band-o-philes, be on the lookout for front flips from the self proclaimed "fool up front."

- Gopher Sports has extended the "Be There" marketing campaign to students with this video.

- Gopher Volleyball has a new head coach. It's Hugh McCutcheon, who most recently coached the silver medal winning US Olympic team.

- Predictions for this weekend from BTN, Adam Jacobi, and What If Sports. All foresee a Gophers victory.

- Wetzel says this weekend is a good time for the B1G to show it's still a premier conference. It's actually just more of a piece about how the B1G isn't going to play anyone. Entrenched national narrative is entrenched.

- BTN brings us an audio clip roundup of the B1G Coaches Conference Call.

- USA Today ranked the B1G football stadiums. Atmosphere was a huge criteria based on the writeup, which is why I was so shocked to see TCF Bank Stadium come in at #9. /sarcasm

- Tom Dienhart lists his #1 question for every B1G team. For the Gophers, it's about defensive improvement. Dienhart also predicts the Legends West Division.

- The Notre Dame radio guy for football is an idiot:

I've always felt like, to have a successful team, you gotta have a few bad citizens on the team," Pinkett told the show. "I mean, that's how Ohio State used to win all the time. They would have two or three guys that were criminals. That just adds to the chemistry of the team. I think Notre Dame is growing because maybe they have some guys that are doing something worthy of a suspension, which creates edge on the football team. You can't have a football team full of choir boys.

- The SEC is relaxing their replay rules for stadium scoreboards. The B1G needs to follow suit ASAP. I'm sure I'm not the only one who hates how there are never enough replays of good plays and ZERO replays of the controversial plays. It's stupid and it needs to change.

- CNNSI's college football writers offer their predictions for the 2012 season.

- The first BlogPoll is out. The Gophers are not ranked for some reason.

- Are you aware of the big rule changes for college football 2012? If not, the WWL leader blog runs through the top 3.

- Football Outsiders released their initial Fremeau Efficiency Ratings. It's basically a statsy way to predict how teams should do. If you're into that sort of thing, check it out.

- Do you think the Gophers have it bad with their season ticket sales woes? You should check out what Maryland is facing:

Maryland’s football season ticket sales are down 18 percent from a year ago, one last lingering hit for the cash-strapped athletic department from a rough 2011 on the field.

According to department figures, the Terrapins had sold 16,241 season tickets through Friday, down from 19,892 a year ago. The shrinking base comes in the wake of the Terrapins’ 2-10 record a year ago.

Since 2005, Maryland has lost more than 43 percent of its season ticket base and has struggled to fill 54,000-seat Byrd Stadium even after the school constructed 64 luxury suites before the 2009 season.

- The Bylaw Blog looks at the idea of having the NCAA needs ban unofficial visits in recruiting.

- And the winner of the Fulmer Cup is the Arkansas Razonbacks. WOO PIG SOOIE! A dominant performance by John L's boys, they bested TCU by 31 points and demolishing the previous single season record. 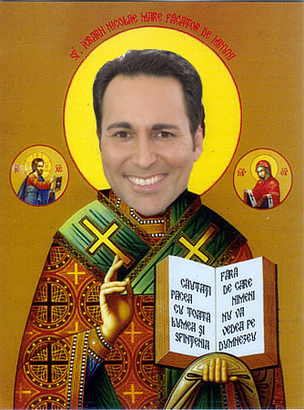 - Lost Letterman grades all the uniform changes for 2012. They give Minnesota an "A" and rank them #9. If your a uniform addict like me this one is worth a look because it has photos of a lot of jerseys that you prob didn't even know changed.

- UniWatch also has a comprehensive look at the 2012 changes, broken down by conference.

- The UCLA SB Nation Blog Bruins Nation is extremely displeased by their uniform changes. Like, wow, that's a rant.

- Old Spice has created a video that is both immensely awesome and slightly scary:

The Vimeo version is better though.

- The B1G Mascot viral video sensation was ranked as the #1 Call Me Maybe video from the sports world, besting the US Olympic Swim team version.